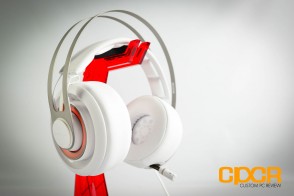 Most of you who follow the PC gaming scene in the past decade have probably seen the SteelSeries Siberia Gaming Headset sometime in the past. It’s been one of the most prolific gaming headsets ever produced with 2014 marking 10 years for this iconic design.

Since the design had been so successful and so iconic, SteelSeries decided to produce a high end version of the Siberia headset with modern industrial design elements, higher quality components, improved audio quality, and additional audio inputs, ultimately calling the new headset the SteelSeries Siberia Elite.

With that said, CES was the first time I ever saw the Siberia Elite in person and being a huge SteelSeries Siberia fan myself, I really had to try out the elite version of the headset for myself.

Interested in seeing how it performed? Let’s take a closer look!

A Closer Look at the SteelSeries Siberia Elite 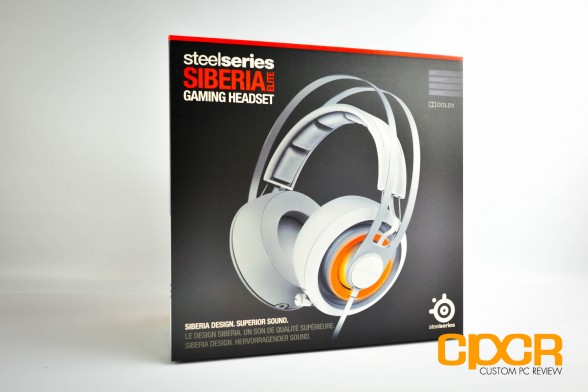 Here’s a look at the packaging for the SteelSeries Siberia Elite Gaming Headset. 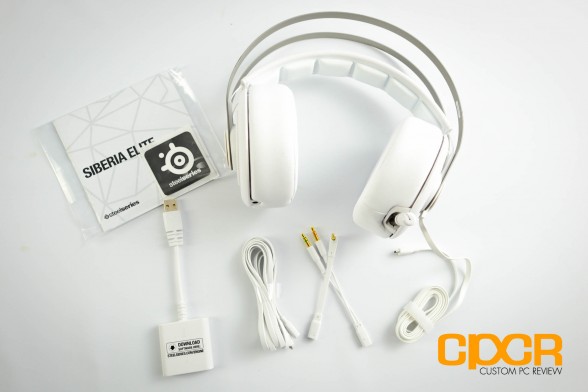 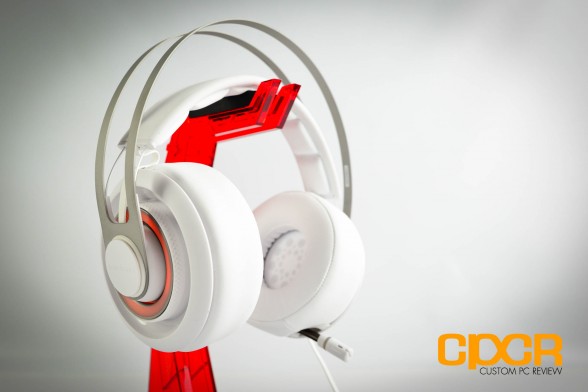 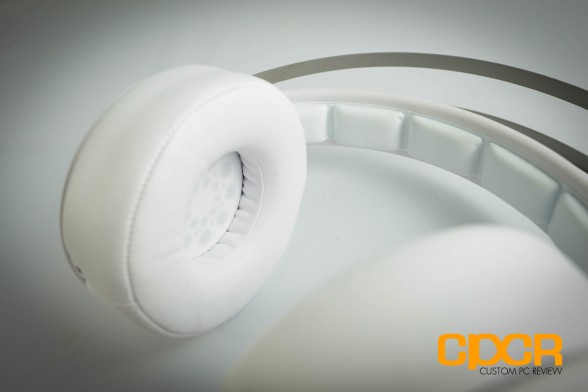 Here’s a look at the earcups on the Siberia Elite. SteelSeries is using thick memory foam covered in leather to produce the highest level of comfort and noise isolation. While the earcups seem quite deep, half of the space is actually occupied by the driver and driver housing, so there’s only about 0.8″ of padding between the driver housing and your head. Similarly, while the earcups seem quite large, the center cutout for your ear is only ~2″ in diameter.

Behind the center mesh is SteelSeries new proprietary Dual Neodymium 50mm drivers which SteelSeries claims has been engineered with over 10 years of gaming audio experience. 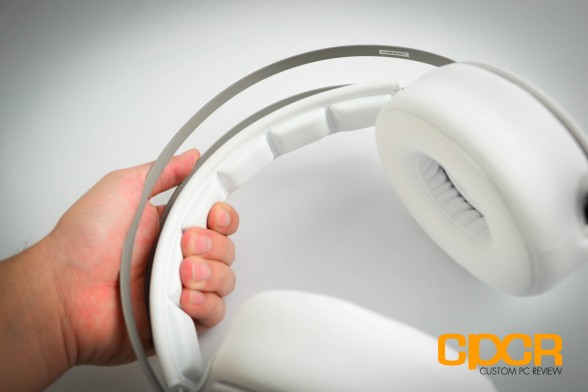 The signature suspension headrest is also lined with memory foam and covered in leather as opposed to the standard SteelSeries Siberia’s thin piece of smooth padding. Despite the thicker padding, SteelSeries still managed to keep the headrest flexible by adding small bumps into the headrest. 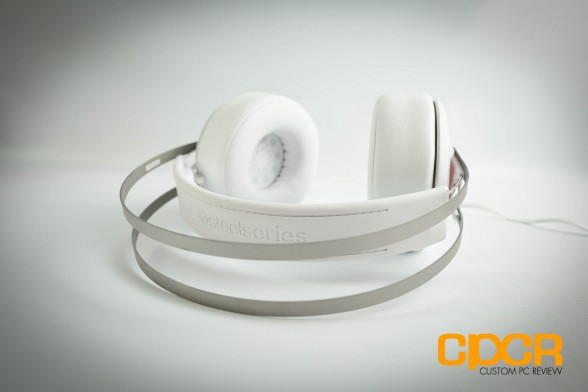 For durability, the bridge hovering over the headrest is crafted out of metal. Despite this, the Siberia Elite still isn’t all that heavy. 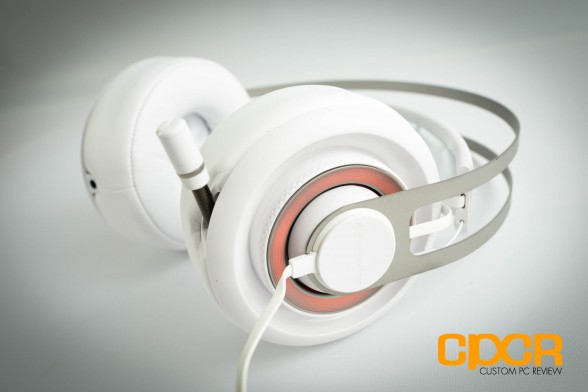 SteelSeries hid them well to not interfere with the Elite’s smooth looks, but there are actually two control wheels on the sides of the earcups. The one on the right controls the volume, while the one to the left disables/enables the pull-out microphone. The flat cables give a degree of tangle resistance, so you don’t have to neatly wrap them every time you toss the Siberia Elite in your bag. 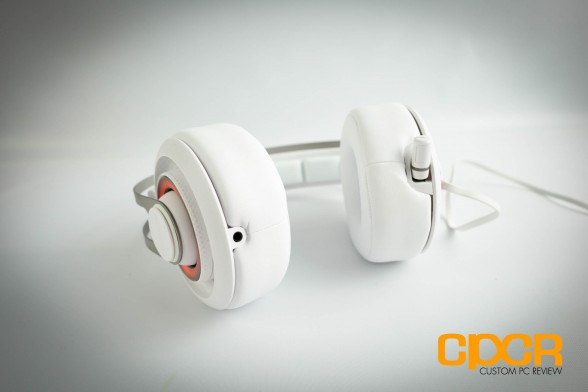 A 3.5mm jack can be found under the right earcup for audio pass through to another headset. The Siberia Elite’s excellent build quality is again seen through the fine seams and the polished exterior. 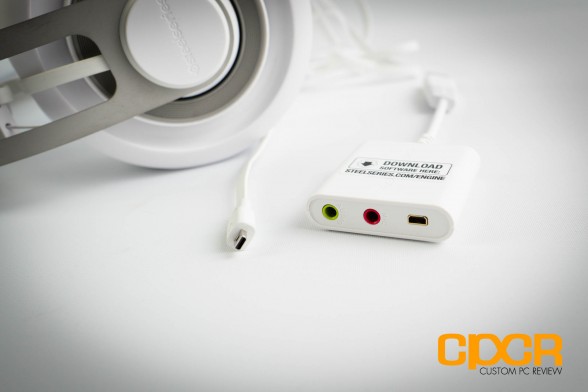 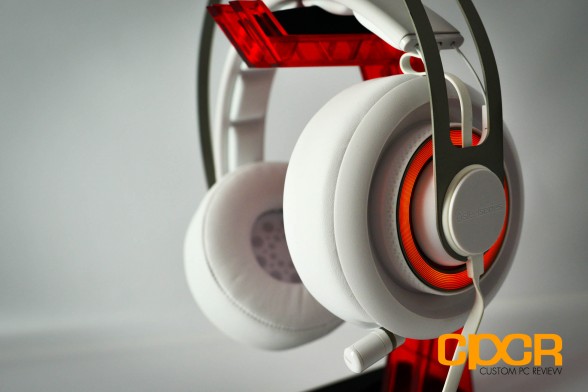 Additionally by using the USB soundcard, the LED strips on the two earcups will also light up. SteelSeries is using RGB LEDs, so you can choose between 16.8M different colors. 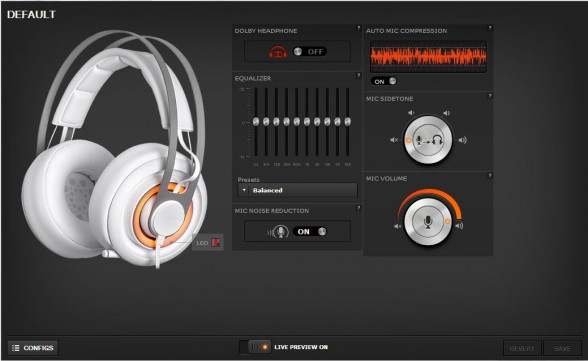 The software for the SteelSeries Siberia Elite, SteelSeries Engine 3, makes changing settings quite easy as everything is condensed onto a single page. Up top there’s a toggle to enable Dolby audio processing and it comes with a set of pre-defined equalizer settings such as FPS, movies, etc. along with the ability to set custom EQ settings.

Additionally, there’s also an option for microphone noise reduction, which is supposed to reduce background noise for those playing in loud environments. An interesting option that you may have noticed is the mic sidetone feature, which plays your voice or ambient voices back to you in a lowered volume. This feature can be useful as the leather/memory foam earcup combination does quite a good job at noise reduction making it difficult to hear ambient sounds such as people talking to you. 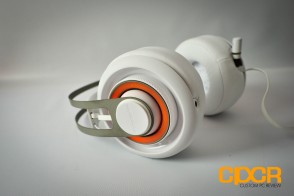 To ensure an optimal experience with the Siberia Elite, SteelSeries recommends installing the SteelSeries Engine 3 software suite and using the included USB sound card, which is what we’ll be testing with. You’ll also need it to enable the advertised Dolby Pro Logic IIx audio processing and to enable the LEDs on the headset. Those who have a high end 3rd party soundcard or DAC can plug the headset directly into that as well using the 2x 3.5mm extension cable.

I’ve added some new benchmarks to my headphone reviews: quality and driver matching. The quality test plays a low frequency sound file that shakes the drivers and checks the build quality of the driver housing. The matching does a sound sweep and tests the uniformity of the output.

The Siberia Elite passed the quality test flawlessly. The drivers didn’t produce any shaking or buzzing noises. But it produced the the ringing effect in the mid ranges of the matching test, disrupting the balance of a true stereo

As always, EA’s Battlefield 4 is usually my first real world test. After spending a couple hours in the game, I noticed that the Siberia Elite has a high degree of audio transparency and audio fidelity. Its out of the box audio profile is extremely balanced, which created a great sounding experience more typically associated with audiophile grade products. Additionally, the headphones were able to create a crisp, clean output which gave sound effects such as footsteps and gunfire exceptional detail. Combined with Dolby Pro Logic IIx virtual surround and the headset’s ability to output clean bass notes, the Siberia Elite proved to be a great asset for gaming.

For the music test, I ran the Siberia Elite through a wide variety of genres including classical, rock, trance, and jazz. Unsurprisingly, the Siberia Elite again delivered excellent audio across all types of music, especially higher-pitched classical music due to the excellent treble response on the headset. While the Siberia Elite has a fairly neutral frequency response in comparison with most gaming headsets, in critical listening I felt that the bass was still a bit heavy, so I toned it down a notch through the software. The drivers responded very well to equalizer adjustments and the headset does come close to providing audio quality that matches some lower end audiophile grade headphones.

Movie testing was done using a Blu-Ray of Pacific Rim which has a fantastically well made DTS-HD Master Audio 5.1 and 7.1 audio track. Again, the Siberia Elite performed wonderfully with excellent clarity. Everything from explosions to dialogue were detailed and satisfying. Those who like a more deep, booming bass response can also switch up the EQ settings, which is something the Siberia Elite responds very well to. Additionally, I also tested the Dolby Pro Logic IIx virtual surround, which actually worked quite well for the movie with emulation errors few and difficult to detect.

Noise cancellation is done passively simply through the thick memory foam padding on the earcups and because of its thickness, it does a very good job of that. With the headset on, the typical clicking on my Cherry MX Blue mechanical keyboard became a “thud” as opposed to a crisp click. Loud traffic noise outside still seeped through a bit, but ambient sounds were almost completely eliminated. 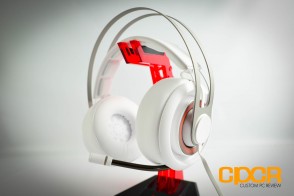 The original SteelSeries Siberia gaming headset was already a great combination of looks and performance, but after spending some time with the Siberia Elite, it’s clear that SteelSeries not only wanted to make their flagship Siberia product better, but they wanted to outclass its predecessor in almost every way possible. In some ways, they’ve definitely succeeded, but in other ways I feel like SteelSeries could’ve done a better job.

Design wise, there’s no doubt SteelSeries did a good job with the Siberia Elite. The modern design is among the best I’ve seen for a gaming headset and is actually classy enough to give that premium feel you typically get with high end audiophile products. That said, nice design doesn’t always translate into comfort and while the thick cushions on the earcups looked and felt great at first, it does become a bit uncomfortable over long periods of time. Personally, I think the earcups need to be slightly larger in diameter and slightly deeper as well. Believe me when I say the interior of the earcup squishing my ears just wasn’t comfortable after a couple hours. Add that to the fact that leather and memory foam doesn’t breathe very well and you’ve got sweaty, irritated ears after a couple hours. Of course, I’m sure those with smaller ears might not have this problem, but this really shouldn’t be a problem on a headset like this.

Ergonomics aside though, the Siberia Elite is definitely one of the cleanest sounding gaming headsets I’ve had the opportunity of using. Its excellent 50mm drivers delivered fantastic sound across all ranges carrying an outstanding degree of  fidelity you don’t usually get with gaming headsets. That said, it’s still inferior compared to a nice pair of audiophile headphones such as the Beyerdynamic DT990, but the Siberia Elite does get pretty close, especially after some EQ tuning via the SteelSeries Engine software. Additionally, thanks to the included USB sound card, the Siberia Elite also includes virtual Dolby 7.1 audio which adds virtual positional audio to games and movies. This helps improve immersion in games and movies, although like most virtual surround sound software, it’s not perfect.

With all the bells and whistles that the SteelSeries Siberia Elite comes with, it’s no surprise that it’s being priced at around $149.99 – a price that’s more than double that of the original SteelSeries Siberia V2  at the time of writing. While I’d love to see the price just slightly lower, even at this price I’d probably recommend the Siberia Elite if its great acoustic performance wasn’t marred by its comfort issues. If you have smaller ears, love the design and have money to spend, then by all means feel free to pick up a pair, but if not I’d recommend testing a pair out if possible at a local retailer before making the purchase.