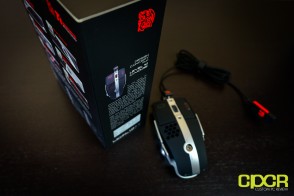 OK, so you own a decked out, ultimate driving machine that makes every car enthusiast droll with envy when you turn on the engine, but when you’re not leaving your opponents in the dust on the streets, don’t you wish you had a mouse that’s as cool as your ride?

That’s probably what one Thermaltake designer thought while driving to work one day and thankfully he wasn’t a lazy bum who would let the idea slip through his head. Now, after a 5 year collaboration between Thermaltake and BMW DesignworksUSA, the Thermaltake eSPORTS Level 10M emerged.

That said then, today we’ll be reviewing the new Thermaltake eSPORTS Level 10M gaming mouse. Since the Level 10M is designed in part by one of the most well known high performance auto manufacturers in the world, it’s only natural that it’s got that high performance car look, but just as an amazing car, the Level 10M’s got some serious stuff under the hood, too. Come embedded in its aluminum belly is an 8200DPI sensor laser sensor with 5 adjustable settings, 7 programmable buttons, an adjustable frame, and an air-through ventilation design to keep your hand cool, and more.

It seems like the only thing this mouse is missing is a showgirl (or two), but can it perform as well as it looks?

A Closer Look at the Level 10M 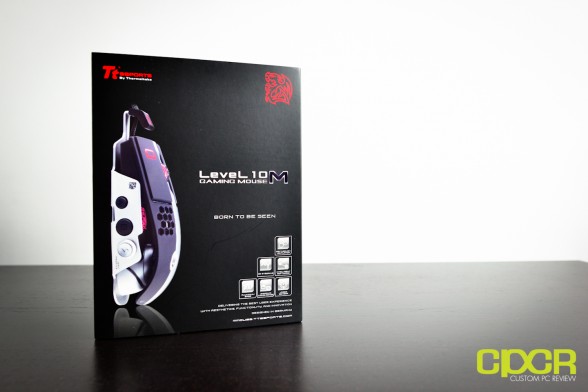 Here’s a look at the packaging for the Thermaltake eSPORTS Level 10M. 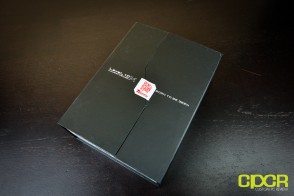 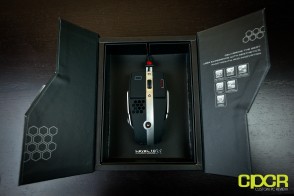 Unwrapping the cover, we get another box, which opens up to reveal the mouse itself. Thermaltake has really gone all out here to make the Level 10M feel like a premium product. 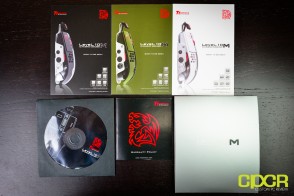 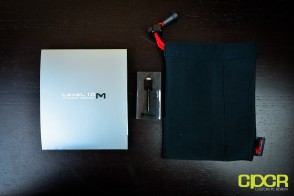 Inside we get a number of accessories such as a driver disk, some Level 10M postcards, some documentation, a carrying pouch and an adjustment key. 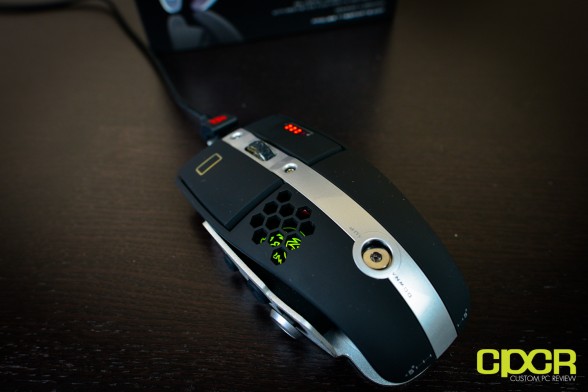 Here’s a look at the top of the Level 10M. The design is fairly ambidextrous, but there are a couple small nuances that make the mouse more suited for right handed use. Notice that the left mouse button is larger than the right. This allows more left click surface area when used with the right hand. Additionally, only the left side of the mouse has the joystick which is used for DPI adjustments and macros, which will be difficult to reach for left handers.

In the center of the mouse, there are small hex shaped cutouts which Thermaltake refers to as air-through ventilation. These holes allow better ventilation to your hands when the mouse is moved. Once plugeed in, a couple parts (scroll wheel, left click button, and Tt eSPORTS logo underneath the ventilation holes) on the mouse light up as well. These lights may be individually configured via the software. 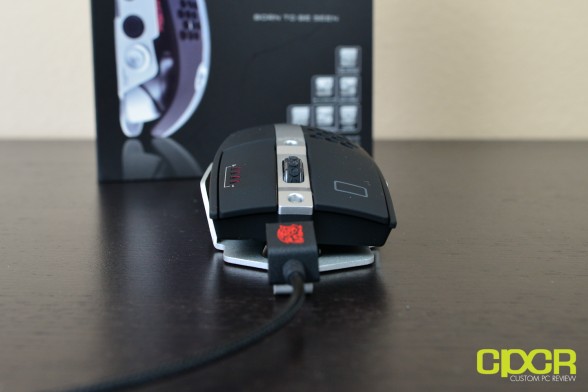 Here’s a look at the front of the Level 10M. There’s a piece up here that extends from the aluminum base which holds the USB cable to keep it from tangling up right in front of the mouse. 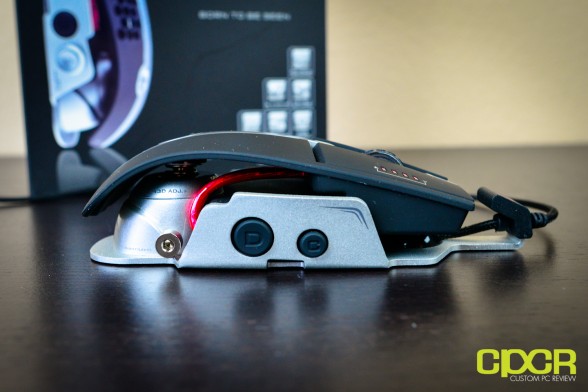 Moving over to the right side of the Level 10M, we can see that there are two buttons here labeled “C” and “D”. right behind the two buttons is an adjustment screw. More on that later. 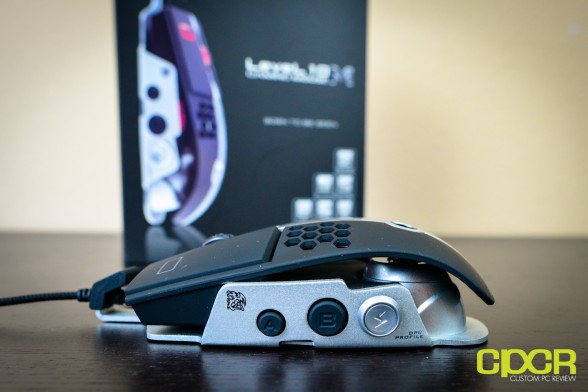 Flipping around to the left side of the mouse, we can see that it’s quite similar to the right side except we get buttons “A” and “B” here instead. Additionally, there’s also a joystick here that can adjust DPI settings or store macros.

We can also see that  the entire inside of the mouse is open air, which helps air pass through the ventilation holes to cool your hands. 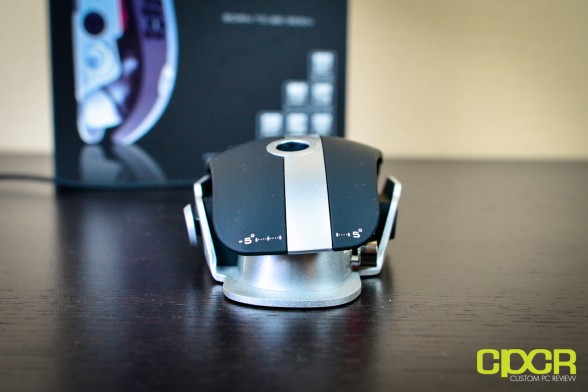 Here’s a look at the rear of the mouse. There are small markings here showing that the top piece of the mouse can be adjusted 5° either to the left or the right. 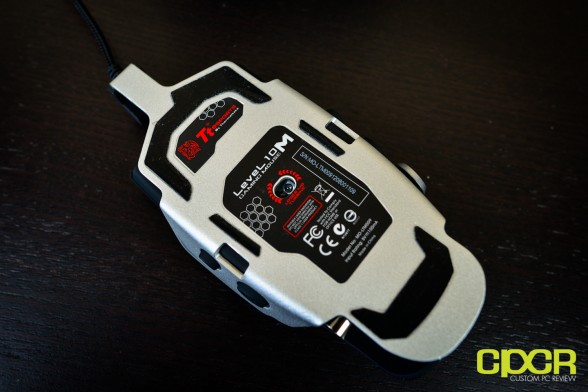 Here’s a look at the base of the Level 10M. The base is quite sturdy and stylish as Thermaltake has gone with a block of aluminum here. We can also see several large Teflon feet, which helps the mouse glide. In the center of the mouse, we get an 8200 DPI Avago ADNS-9800 sensor. 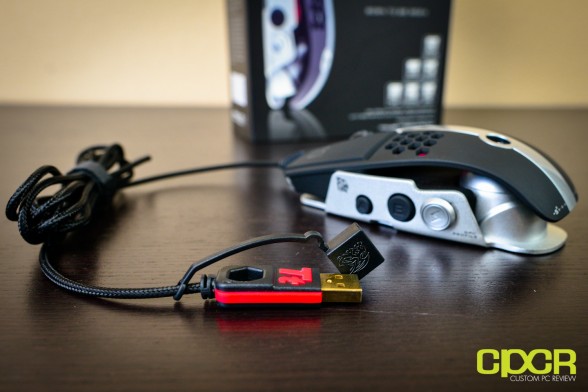 The Level 10M also includes a braided cord along with a gold plated USB connector. For additional protection, Thermaltake has also included a USB cover. 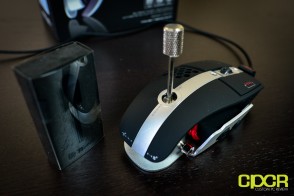 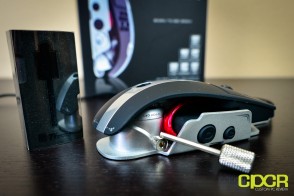 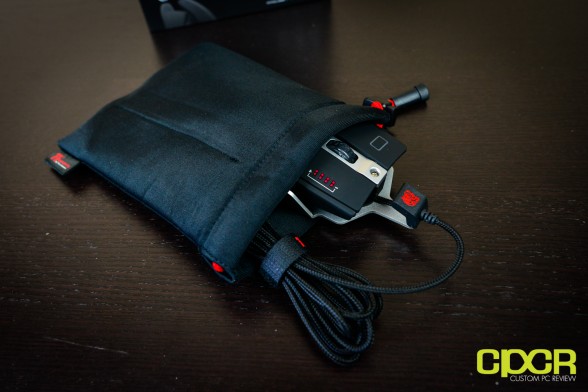 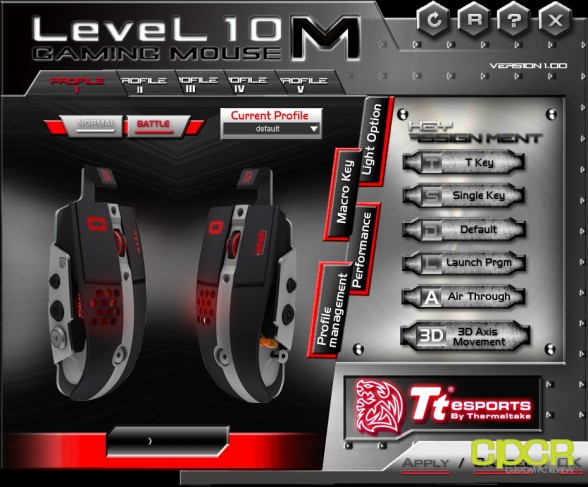 The default screen here includes pretty much every menu item you’ll need to adjust lighting, setup macros, change profiles, etc. What’s strange is that Thermaltake even included a couple buttons for 3D Axis Movement and Air Through, which does absolutely nothing other than play a feature demonstration video with loud rock music. Let’s take a closer look at the software suite. 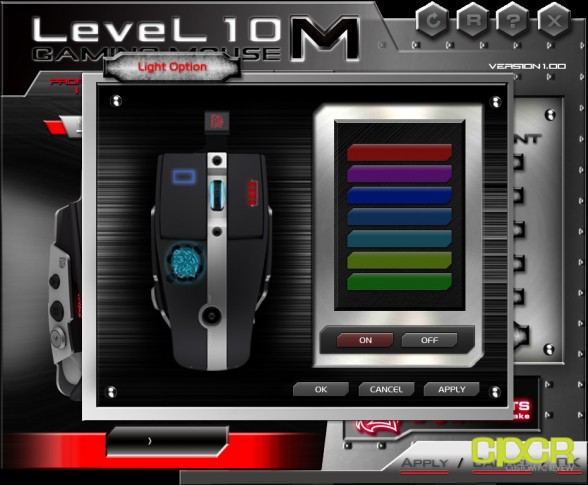 Here’s a look at the “Light Option” which, as you may imagine, controls lighting on the Level 10M. Thermaltake allows you to individually choose the color for the lights on the Level 10M as well as turn it off completely. 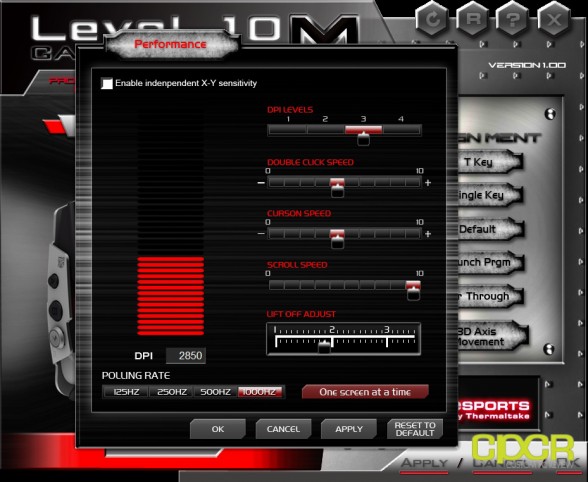 Here we get the “Performance” menu, which allows adjusting of the DPI levels, polling rates, liftoff distance configuration, etc. The onboard DPI switching button on the mouse is capable of toggling through 4 DPI settings with each individual DPI setting capable of being adjusted here. 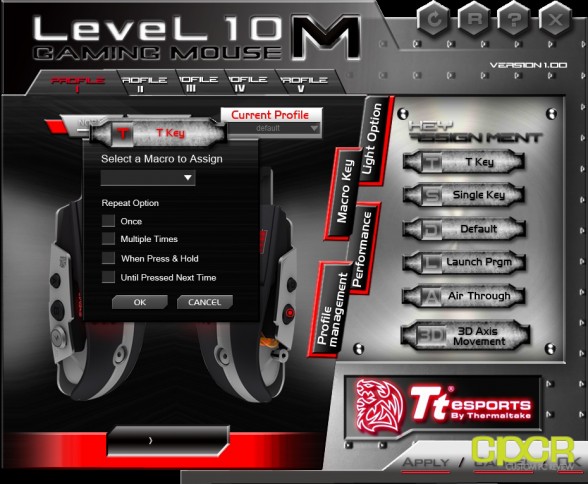 Finally, here’s a look at the macro menu. Macros may be set through the macro settings menu, then assigned on the mouse buttons. 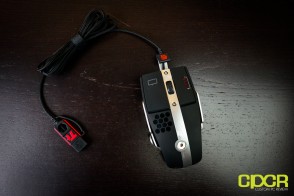 In terms of gaming performance, I felt like the ThermalTake Level 10M was fairly good. Spending a couple hours testing the Level 10M with CS:GO, League of Legends, and Hitman: Absolution, the Level 10M performed quite well. The 8200DPI laser sensor was jitter free at low and high sensitivity. Although it was relatively acceleration free for the most part, small amounts of positive acceleration were still present when tested with CS:GO with raw mouse input enabled. Of course, we’re quite familiar with the Avago ADNS-9800 as it’s been used on previous mice we’ve reviewed such as the Razer Taipan and the CM Storm Sentinel II.

In terms of general use, the only major complaints I have are the side button locations and how soft the switches on the side buttons are. Since the side buttons are fairly large, it’s nearly impossible to avoid having some portion of your thumb resting on a side button. With the hefty weight of the mouse along with the switches being so soft, it’s quite difficult not to accidentally press the buttons. Because of this and the fact that there are two more identical buttons on the other side of the mouse, there really isn’t any spot on the mouse to comfortably rest the thumb, index or pinky finger.

Speaking of comfort, the Level 10M definitely wasn’t the most comfortable mouse out there after extended gaming sessions. Although the Level 10M allows for adjustments on the angle and the height, there wasn’t any adjustments for the length. Unfortunately as I have small hands, the mouse was too long for me to get a comfortable palm grip. Additionally with the weight of the mouse as well as the lack of space on the left or right sides, it was quite difficult to get a good claw grip too. Fingertip grip users will also have a hard time with the Level 10M as it’s extremely back-heavy. 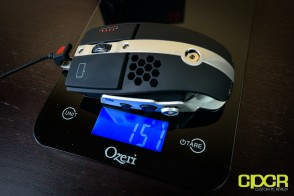 It’s always difficult to do mouse reviews as everyone generally has their own preferences when it comes to gaming peripherals, especially with gaming mice. Factors such as the user’s hand size, grip style, weight preferences, etc. all play major roles in the equation, which makes it quite difficult to make a concrete decision.

Personally I felt like the Level 10M was a powerful, but tough ride. Performance was quite good overall and with Thermaltake deciding to go with the newer Avago ADNS-9800 sensor, the mouse is mechanically solid. That said, I felt like Thermaltake spent a bit too much effort designing the most beautiful mouse that they missed the ball in terms of comfort. For use in short periods of time, I had no issues with the mouse whatsoever, but as time stretched out and as gaming became more intense, it became significantly more uncomfortable to use the mouse. 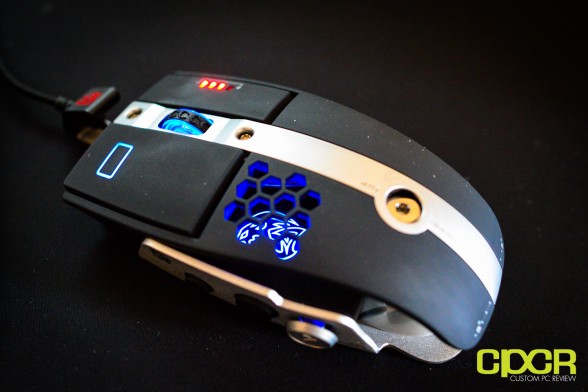 While the Level 10M may not be the most comfortable mouse on the market, it’s difficult to argue that Thermaltake and BMW DesignworksUSA did a phenomenal job styling the mouse. The industrial design of the mouse with its aluminum base and matte black finish really popped on my desk and was definitely something that instantly drew a lot of attention. Given the fact that the base is aluminum, the entire body of the mouse feels extremely solid as well with very little flex in the frame. Those who enjoy heavier mice would definitely enjoy having the extra weight of the aluminum base; however, be aware that the mouse doesn’t any any sort of adjustable weight system, so those who don’t like heavier mice will probably want to go with something else.

Pricing on the Thermaltake eSPORTS Level 10M black gaming mouse as reviewed today is $97.60 on Amazon, which puts it at the very top tier in terms of price. Of course, Thermaltake is marketing the Level 10M as a premium product and with it does come the premium pricetag.