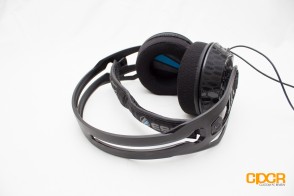 Many of today’s peripherals now have a ton of customization options. Parts can be removed, added, or swapped depending on the user’s preference. However, the gaming headset scene hasn’t seen a whole lot of customizability yet. Sure some companies have added the option for users to switch out the appearance of their headsets, but it’s rare to see a gaming headset where most of the parts can be removed and replaced depending on a user’s preference.

Looking at the spec sheet, the Plantronics RIG 500E is a fairly standard Plantronics gaming headset. We can see it uses 40mm drivers, which could possibly be drawn from the excellent drivers used in the GameCom series, but I’m not sure exactly what Plantronics uses here.

A Closer Look at the Plantronics RIG 500E 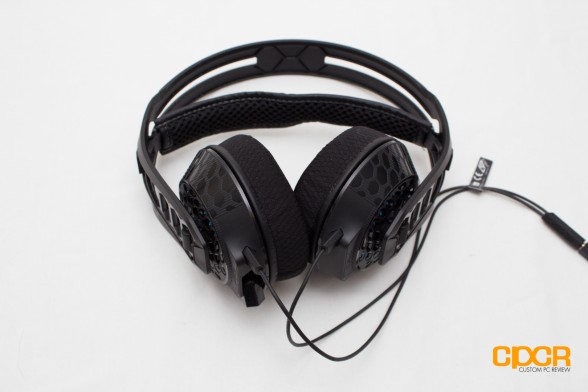 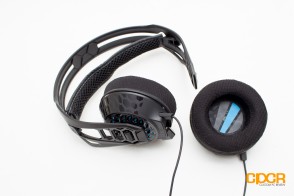 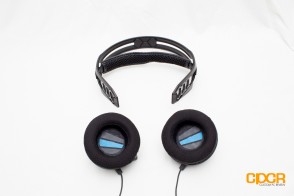 The magic happens when you pop one of the earcups off the headband. Nothing is broken in this picture. Yup. The entire earcup assembly is completely removable. 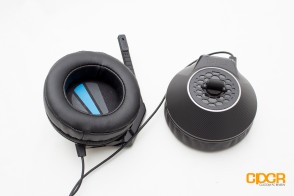 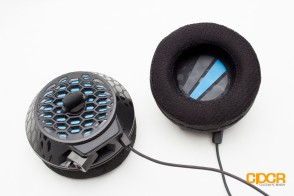 Plantronics included a set of closed back, pleather padded earcup as well as a pair of open back, plush padded earcups. Thankfully, glossy plastic is used sparingly for the earcups so fingerprints shouldn’t be too big of an issue. The cables here look slightly flimsy as they’re quite thin, but they did feel pretty sturdy when I tugged on them. 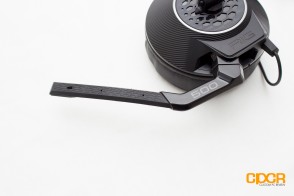 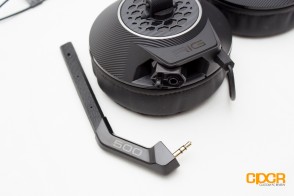 Plantronics also includes a uni-directional microphone which is plugged into the earcups. As such, it may also be removed when not needed. 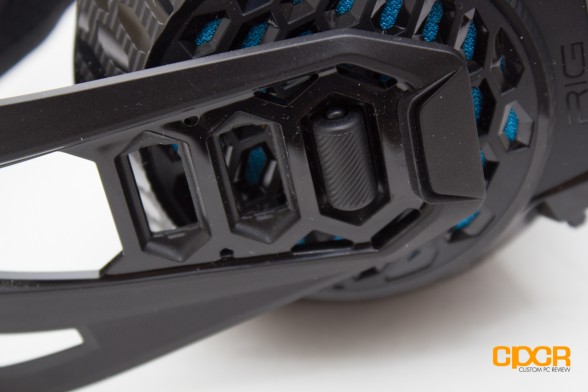 The earcups snaps to the headband at three different insert points depending on user preference. 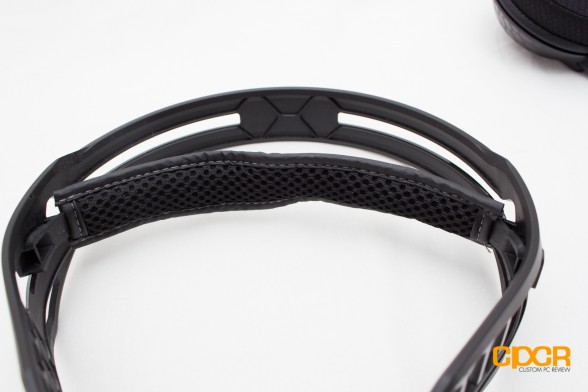 The suspension type headrest is surrounded by a padded sheath. Instead of using metal cables, Plantronics opted to use an elastic plush band on the inside to maximize flexibility and comfort. 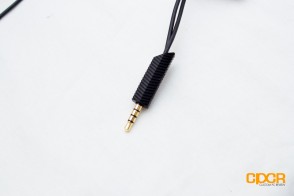 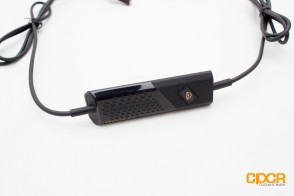 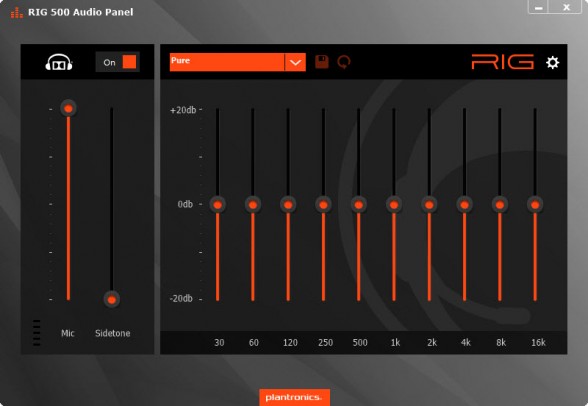 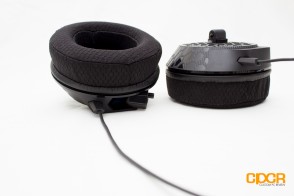 For our review today, I’ll be testing both headset quality and audio quality. Quality testing mainly tests the headset’s construction quality and helps burn in the headphones.  In order to do this, I play a low frequency sound that simply rumbles the drivers to see if there’s any apparent issues with the driver housing. Lower quality headphones tend to rattle or hiss resulting in unwanted rattling sounds in the audio.

The Plantronics RIG 500E passed the quality test flawlessly. The driver housing did not produce any noise or rattle under strain. I was pleasantly surprised at the RIG 500E’s relatively strong ability to play lower frequencies without bottoming out or sounding flat which is an issue some lower quality headsets tend to have.

With that said, there was a noticeable hissing noise when there’s nothing playing. In most cases, this due to poor grounding from the USB power port which is common in the cheaper in-line USB sound cards that lacks proper audio jack filtering. The hissing isn’t noticeable when there’s audio playing, and it can be completely eliminated by connecting it to an external sound card.

EA’s Battlefield 4 will be the first of the three real-world tests. After playing a few rounds, I noticed that the RIG 500E excels the most at the bass and treble ranges which is typical tuning for most gaming headsets on the market. This helped heavy explosions and the snapping gunshots sound phenomenal. With that said, the mids were a bit flat and unexciting in comparison to the other ranges. The Dolby Virtual 7.1 surround sound which I’m quite familiar with worked very well. Positional sound were spot-on and transition from position to position was very good, as expected. Both sets of earcups produced similar sound, however the soundstage of the earcup with plush ear padding had noticeably wider soundstage.

The music test is composed of a variety of genres including classical, rock, and jazz to cover most sound ranges. This test was conducted with the Dolby Virtual 7.1 surround sound turned off as Dolby Virtual 7.1 does sometimes produce strange echos and sounds in music designed to be heard in stereo. Once again, the Plantronics RIG 500E delivered phenomenal performance at the treble and bass ranges, making jazz and classical a very enjoyable experience. Mids were still a bit underwhelming, so I had to boost it a bit with the software equalizer. While the sound quality of the drivers were the same, I did prefer the more expansive sound stage of the open-back ear cup with the plush padding.

Movie testing was done using a Blu-Ray copy of Pacific Rim, which has a fantastic DTS-HD Master Audio 5.1 and 7.1 audio track. I enabled the Dolby 7.1 Surround Sound for this test to get the full immersion. The Plantronics RIG 500E provided an excellent level of clarity. I was able to distinguish little bits of sound clearly from one another. Its excellent bass output helped alot in this title, as it’s saturated with a ton of explosions. The flatness of the mids weren’t very apparent in this test, mostly due to how many sounds are happening all at once.

Sound isolation varied depending on which type of ear cups was attached. The pleather ear cups provided the most noise isolation, preventing a lot of noisy traffic from getting through. It also did a great job at reducing the sharp clicks from my Cherry MX Blue keyboard. But since pleather isn’t a very breathable material, my ears got warm after a while. The plush padding fared much better in terms of heat, but provided less noise isolation.

The microphone was acceptable for something designed for a gaming headset. Although my voice sounded relatively flat and lacking depth, it was clear and noise free. My only gripe with the microphone is that by design it can’t be swiveled up and down. You have to either bend it away from your face or remove it completely.

The Plantronics RIG 500E scores huge points for design innovation. Not only does the modular design make components easier to swap, it also lets users replace parts of the headset individually if some thing goes bust. Plantronics also included two sets of earcups for added versatility – an open back, plush padded earcup and a closed back, pleather padded earcup. That’s pretty awesome.

Plantronics has always done a good job at keeping the weight of its headsets down and the Plantronics RIG 500E is no exception. Coming from a relatively heavy headset *cough* Razer Tiamat 2.2, I definitely appreciate the fact that it doesn’t strain my neck. Not only that, Plantronics did so without sacrificing build quality; the unit is well polished and feels very sturdy, and the driver housing kept the drivers stable in my quality test. Despite having a ton of detachable parts, all the components are held very sturdily in place. We’ll see how it keeps up in the long term, but with easily replaceable parts, it shouldn’t be too bad even if a cord or something breaks.

The lightness of the headset is complimented by the comfort of the earcups. Both the plush and pleather paddings fit my ears very well as they’re relatively large in diameter and fairly deep. Although the pleather padding was a bit stiff and hot, noise isolation was excellent. The plush padding was spongy and didn’t trap heat. The suspension style headband could be a little wider to distribute the weight a little more evenly. It put a bit of pressure on the top of my head after a few hours of wear.

The Plantronics 500E delivered great sound quality for a gaming headset. It especially excels at the higher and lower sound ranges. The mids were a bit flat in comparison, but that can be adjusted through the equalizer in the Plantroncis Audio Panel at a cost of slight sound distortions. While both sets of earcups exhibits the same characteristics, I like the expansiveness of the open back earcup more. Dolby 7.1 Surround sound worked beautifully, enabling rich and accurate positional sound. I also love the little switch on the sound card so it can be turned on and off on the fly.

With that said, the included USB soundcard has some issues. There’s a faint hissing sound when the headset is connected to the USB soundcard due to poor grounding, but it’s less apparent than other headsets with the same problem and is easily drowned out when there’s audio playing. Personally, I’ve never found it to be too annoying. But you do plan on using an external sound card, just beware that there’s no headphone/microphone splitter included for the 3.5 mm connector so you’ll lose the option to use the microphone. Speaking of the microphone, the Plantronic RIG 500E’s mic audio quality is decent for most VoIP applications which is usually Plantronics strong suit anyway.

The Plantronics RIG 500E is available for $149.99, which is pretty steep even for a premium gaming headset. Because modularity and flexibility is its main drawing points, I would recommend this headset to gamers who would like to switch between their listening styles and are just looking to purchase a single gaming headset that’s good for a variety of music types and a variety of listening locations. Although the hissing sound is easily drowned out by actual audio, I can understand that some users may want to use a discrete soundcard for the cleanest listening experience. If that’s the case, Plantronics also offers the more bare bones Plantronics RIG 500HC which has the same audio hardware (with the exception of the in-line sound card and an additional pair of earcups), but can be had for a significantly cheaper $59.99.