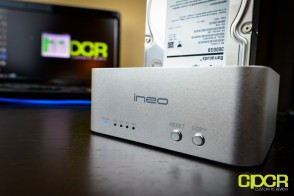 While the beautiful brushed aluminum styling is very similar between the Ineo I-NA320U Plus and the I-NA321U+, the I-NA321U+ contains a couple additional features. Most notably, the I-NA321U+ is a dual bay docking station, capable of simultaneously writing and copying from both bays. Additionally, as an enhanced bonus, the I-NA321U+ is also capable of PC free hard drive cloning, which will allow users to easily make carbon copies of drives for archiving or backup purposes. 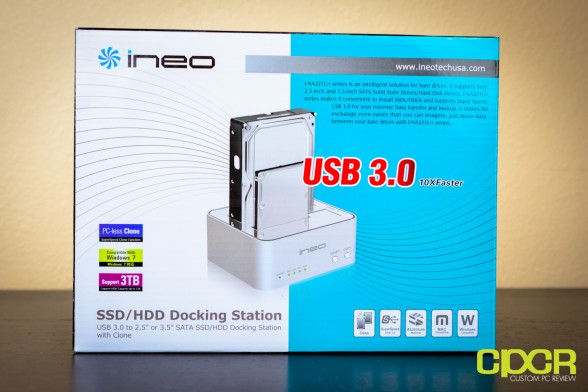 Here’s a look at the Ineo I-NA321U+ packaging. It’s quite simple with plenty of logos and graphics describing all the features of the unit itself. 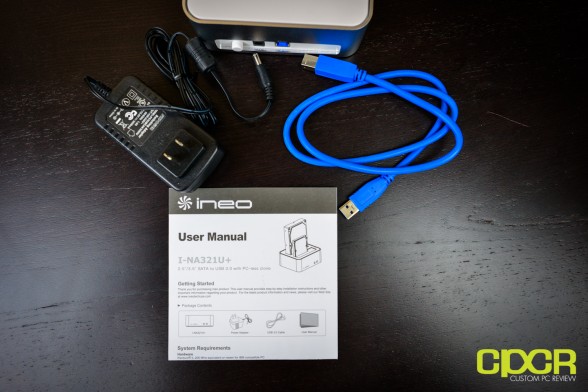 Inside the packaging, you will find some documentation, a power adapter, and a 3 feet USB 3.0 cable. The only thing I’m concerned about here is the 3 feet USB 3.0 cable. 3 feet is ridiculously short and there’s no way it’s long enough to reach any PC situated on the floor. Ineo needs to include at the minimum a 6 feet cable here. 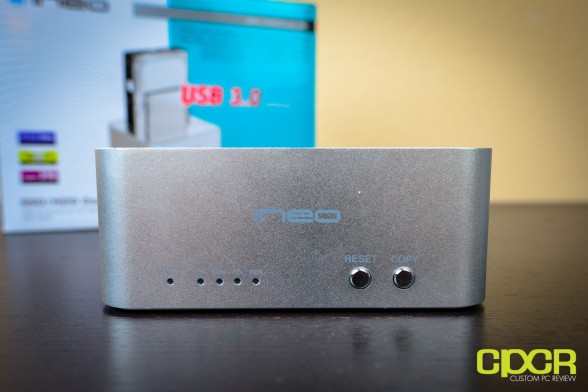 Here’s a look at the front of the I-NA321U+. The entire exterior is made of beautiful brushed aluminum (with the exception of the reset/copy buttons that are made of plastic). At the bottom left there are five LED indicators. Starting from the left we get the power LED, 25% LED, 50% LED, 75% LED, and 100% LED. 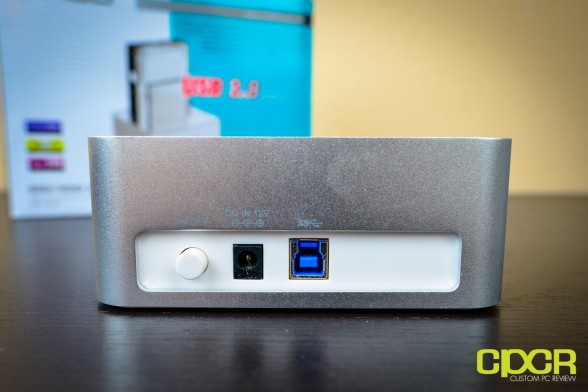 At the back we get the power switch, a power input, and a USB 3.0 input as well. 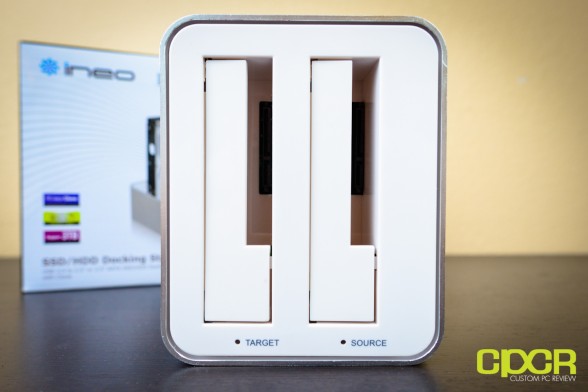 At the top we get two bays. The bays have LED indicators as well as text marking the bay as the “SOURCE” or “TARGET” bay. This is used for hard drive cloning later on. 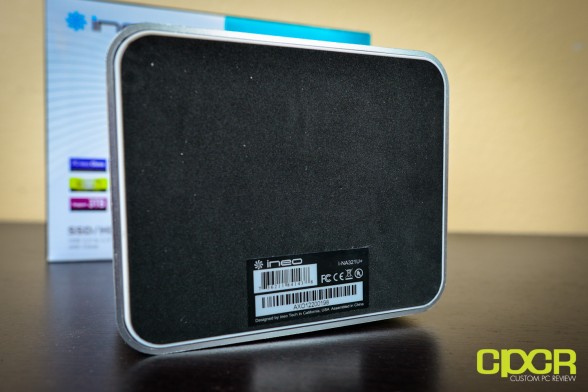 The bottom of the drive features a felt lined finish, which will prevent table scratching. 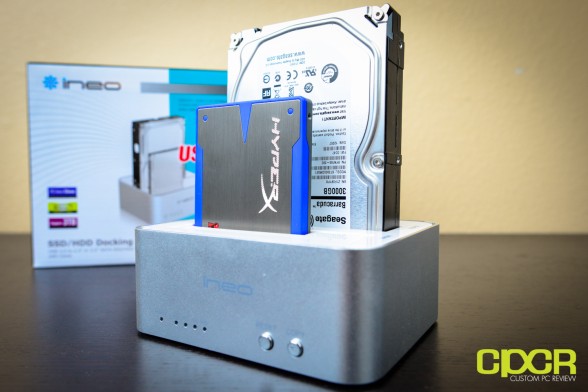 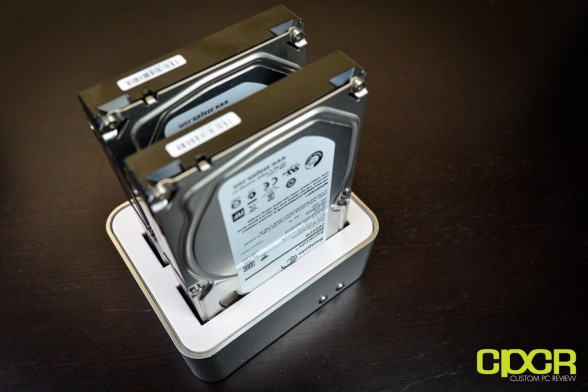 The dock is also 3TB drive compatble, so here’s a look at the dock with dual 3TB Seagate Barracuda 7200RPM hard drives installed. The brushed aluminum finish matches very well with the metal finish on the hard drives.

Because of some inconsistencies found during testing, Crystal Disk Benchmark was also used on one of the tests to confirm results found in ATTO Disk Benchmark. 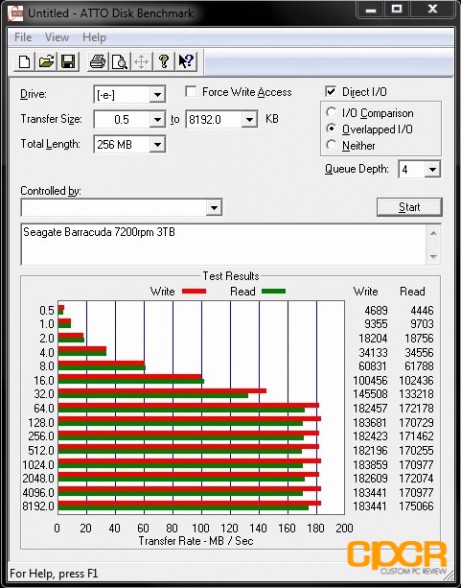 To start off, I conducted some testing using a Seagate Barracuda 7200RPM 3TB hard drive. High capacity storage drives are most likely going to be used with this dock, so I felt this was an appropriate choice here. Additionally, this also tests the dock’s ability to handle 3TB drives.

As you can see above, performance here was exceptionally good with the Seagate Barracuda 3TB 7200RPM pushing 183MB/s writes and 175MB/s reads. This drive itself is only rated for about this much performance, so it seems like the I-NA321U+ is capable of maxing out the drive itself. 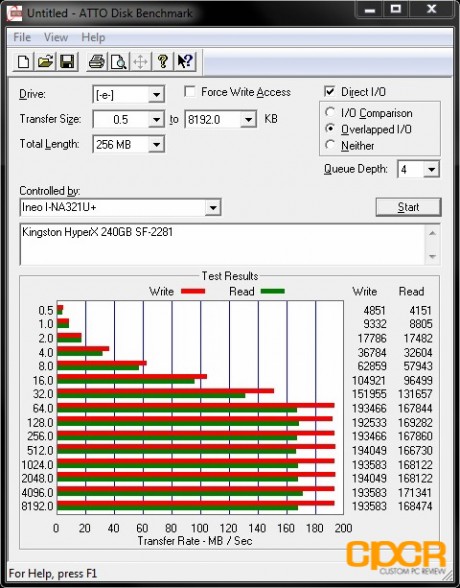 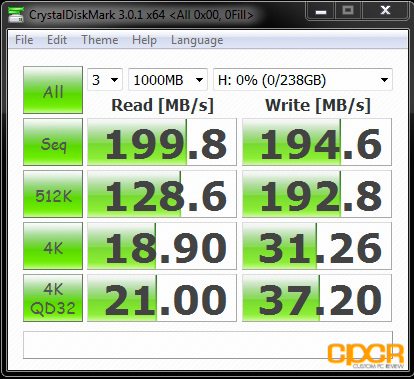 Since I wasn’t satisfied with the last result, I went ahead and benchmarked a different SSD, the OCZ Vertex 4 256GB, with a different benchmark, Crystal Disk Mark. Like the Kingston HyperX 240GB, the OCZ Vertex 4 256GB is a top tier SSD capable of well over 500MB/s sequential reads and writes using compressible data over SATA 3 6Gb/s. Again, here we get more confirmation that the dock is flat out limited to about 200MB/s sequential reads and writes.

Considering the Ineo I-NA320U Plus was capable of almost 227MB/s sequential writes and 228MB/s sequential reads with an OCZ Vertex 3 128GB, it seems like there’s a flaw in the I-NA321U+, which limits it to around 200MB/s. 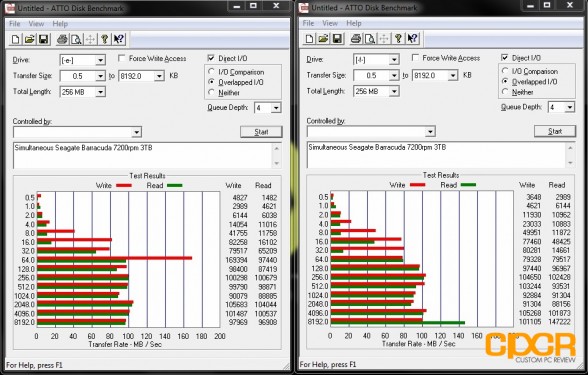 Finally, I also wanted to test the I-NA321U+’s performance when two drives are plugged into the dock, so I dropped in two Seagate Barracuda 7200RPM 3TB drives and fired up ATTO Disk Benchmark simultaneously. As you can see here, transfer rates for the most part are instantly cut in half. This suggests that the dock isn’t capable of handling speeds over around 200MB/s. This is a disappointment as I really wanted to see transfer rates get closer to the USB 3.0 640MB/s theoretical maximum. About 250 MB/s is about as fast as I’ve seen off any USB 3.0 drive. 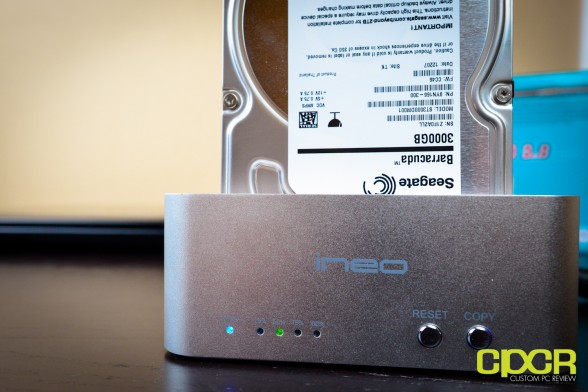 Finally, I also did some testing with the drive cloning function on the I-NA321U+ as well. Cloning the drive was overall quite easy as it’s pretty much a one button affair.

The instructions were not very good when it comes to cloning the drives, so I’ll explain how it works.

I attempted cloning one of my 3TB drives with only 500GB loaded on. The cloning took an extremely long time, which suggested to me that the dock’s drive cloning function works by doing a sector for sector type of cloning so it was actually cloning the full 3TB drive despite most of the drive being empty. While this takes a long time, it may (assumption only so don’t take my word for it) help recover dying hard drives that have files unreadable by the Windows OS. This should be extremely useful to those who work in IT or computer repair. 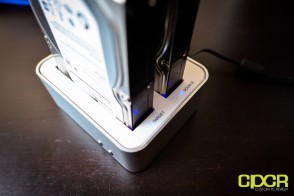 So with testing out of the way, let’s talk about the docking station. Overall, it’s a pretty good unit. It’s one of the best looking hard drive docks you can buy at the moment, and it’s extremely well built – serious thumbs up for the brushed aluminum finish. Love it. USB 3.0 is also a nice touch, and it does support up to about 200MB/s sequential reads and writes, so the ceiling here is slightly higher than most traditional hard drives on the market. There’s the WD Velociraptor 1TB 10,000 RPM drive  that can hit around 350MB/s or so in burst, but I doubt anyone will be using something like that with this dock.

Feature wise, the drive cloning function works, and it works quite well. Those who need daily backups of their files could just hit the clone button at the end of each workday and have all files on the source drive cloned to the target drive. Do expect it to take a long time as it doesn’t just simply copy files over. It literally clones the whole thing so even with drives that are 95% empty, expect it to take a long time. This however, is a good and a bad thing as it may be capable of cloning drives that are damaged or dying. This may be extremely helpful to those who work in IT or computer repair and have to recover files from hard drives that are near death.

Good points aside, let’s talk the negatives. First, I’m still not happy with the 3 feet USB 3.0 cable. Come on Ineo, seriously? 3 feet is ridiculous. 6 feet at the minimum, please. Second is the fairly low 200MB/s sequential transfer ceiling. 5Gb/s, as advertised, should translate into 640MB/s. Now I understand that USB 3.0 simply isn’t capable of such performance at the moment and is limited not only by the USB 3.0 device itself, but the motherboard’s chipset as well. However, in my recent USB 3.0 flash drive review roundup, the fastest drives were capable of hitting up to 252MB/s sequential reads. In fact, even the older, single dock Ineo I-NA320U Plus was able to hit up to 228MB/s. This almost seems like a step backwards instead of a step forward.

Finally, the price on the Ineo I-NA321U+ is currently $79.99 on Amazon. This makes this product very expensive, but so far I haven’t found a single dual bay dock out there with offline cloning functionality and USB 3.0 compatibility. The closest out there I’ve found is the Startech Dual Bay HDD Duplicator Dock, which retails for $56.99 on Amazon. That said, it doesn’t support USB 3.0 (It does however, support eSATA) and it doesn’t look anywhere near as nice as the Ineo I-NA321U+.

While there are small limitations with the Ineo I-NA321U+, it’s an excellent dock for those looking for a dual bay docking station with USB 3.0 and offline cloning functionality. Those looking to pick this up to use with a desktop, don’t forget to pick up a 6 feet or longer USB 3.0 cable along the way.

Special thanks to Ineo for making this review possible.

The Ineo I-NA321U+ is currently available on Amazon.