Who Needs a Keyboard? 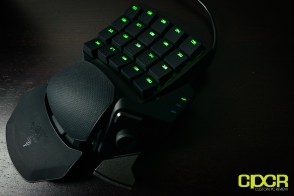 Having been a keyboard/mouse gamer my whole life, I’ve always been a huge fan of Razer products ever since the days of the Diamondback and the Boomslang, and when Razer unveiled the Nostromo gaming keypad a couple years back, I thought it was possibly one of the coolest peripherals ever. At the time it kinda felt like something that had dropped out of the command center of the USS Enterprise or something as it was something that just seemed like it could be the future of the gaming peripheral.

While I did get to play with demo units of the Nostromo here and there, I never actually ended up owning one, which is why I was so excited when Razer offered me the opportunity to review the Orbweaver.

For those who’ve never heard of the Razer Orbweaver or the Razer Nostromo, both the Orbweaver and the Nostromo are what Razer calls gaming keypads. As its name implies, it’s basically a miniaturized keyboard meant to be used by only one hand. The special thing about the Orbweaver is that Razer is using Cherry MX Blue mechanical keyswitches for the keys, which gives each key a nice, even, tactile and clicky response that’s become so popular with the recent surge of mechanical keyboards as of late.

That said then, is the Razer Orbweaver reason enough to forget about the good old keyboard? Let’s find out!

A Closer Look at the Razer Orbweaver 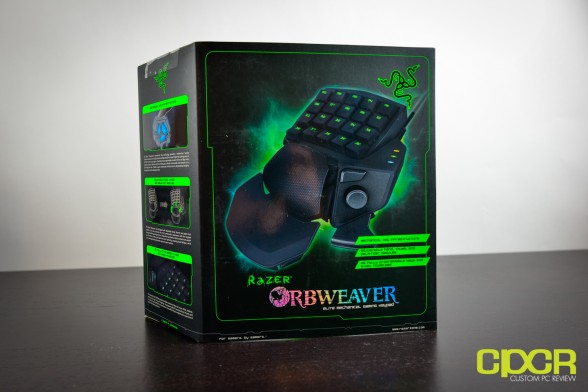 Here’s a look at the familiar Razer green/black themed packaging. 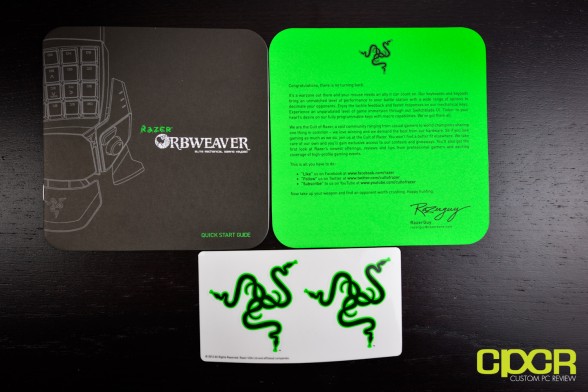 Inside we get some documentation along with the usual Razer stickers. 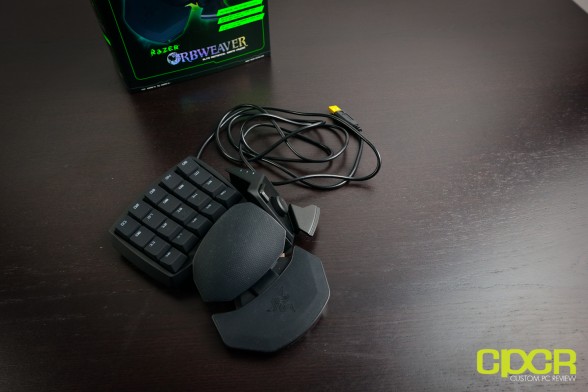 Documentation aside, we get the Orbweaver itself. Oh my it looks so cool. Let’s take a closer look. 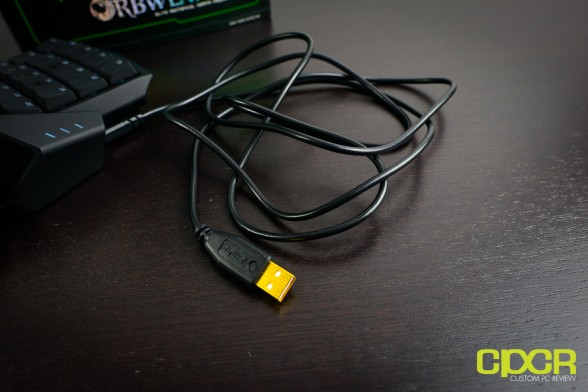 Starting at the connector here, we’ve got the usual gold plated USB connector Razer is oh so famous for. As for the cable however, it seems like Razer has decided to not go the usual braided cable route, so all we’ve got is the unusual thin plastic cable. For a  mechanical gaming keypad that costs the same as a mechanical gaming keyboard, it’s odd that Razer decided to cut costs here. 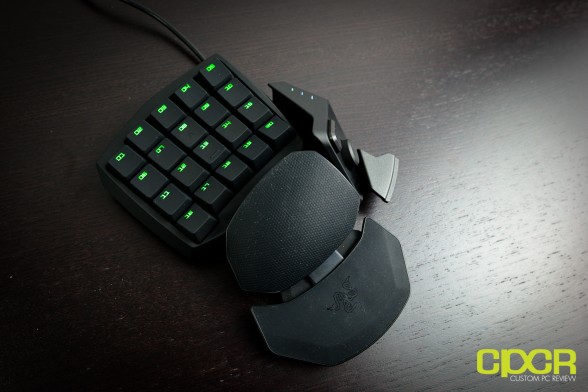 Alright, so plugging the Orbweaver in, we can see that the unit is green backlit. This is the only backlighting color, which seems to be the theme for all recent Razer products. The main keypad has a total of 20 programmable keys along with an adjustable wristrest and adjustable palmrest as well. 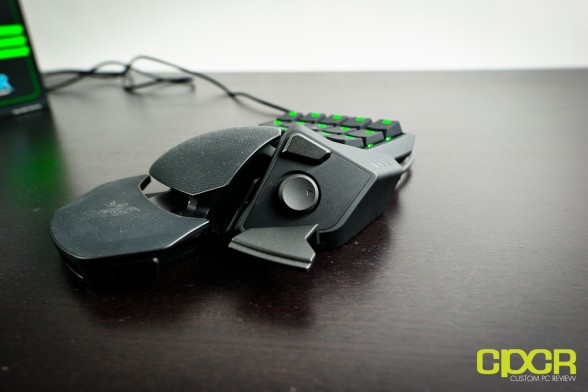 Moving to the right side of the keypad, there’s also an 8 way d-pad, a button above the d-pad, and a wing-like button below the d-pad. Like the keys on the main section of the keypad, these buttons are fully programmable as well. 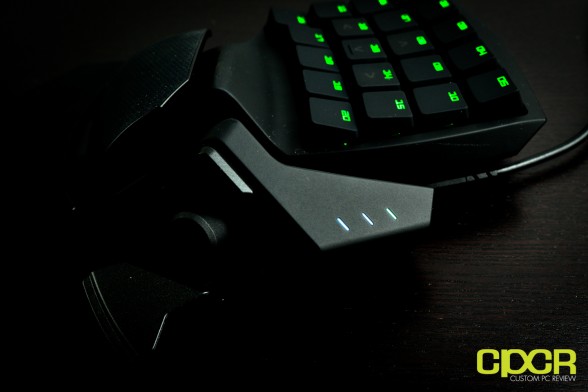 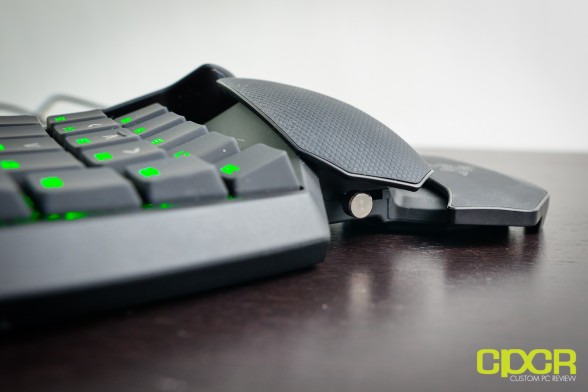 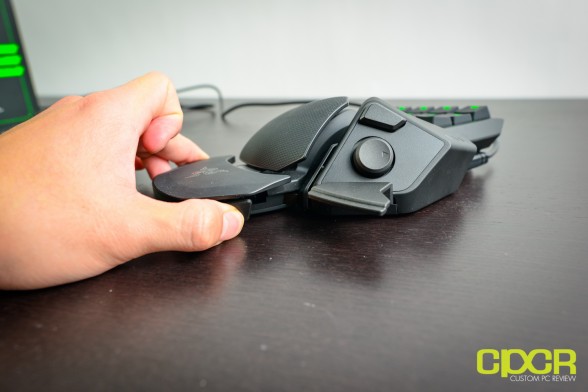 The palmrest is adjustable by pushing on the button as shown here. The palmrest may be pulled out or pushed in to increase or decrease the length of the Orbweaver. 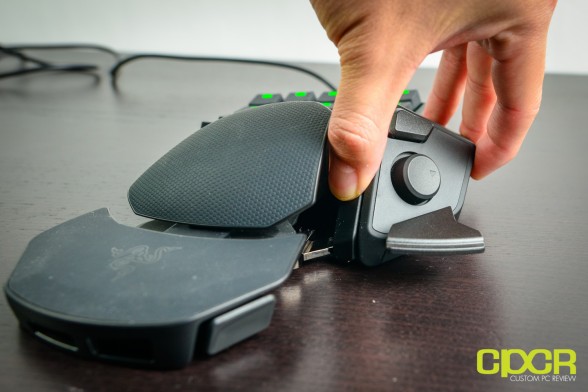 Finally, the thumbrest may be adjusted as well. 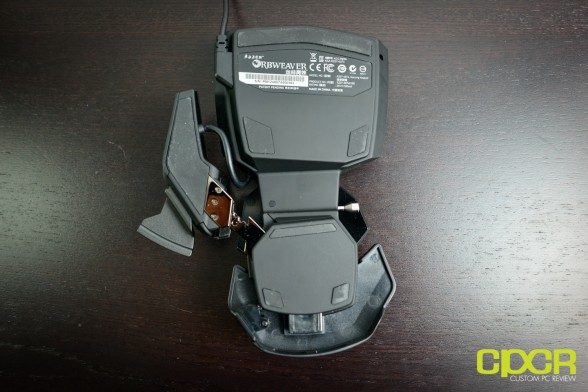 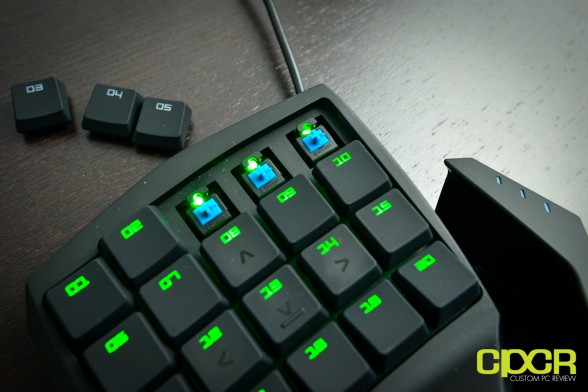 Removing a couple keycaps on the Orbweaver, we can see that Razer has gone with Cherry MX Blue keyswitches which are both clicky and tactile. This should be familiar for anyone who owns a Razer BlackWidow. Additionally, each key is individually backlit as well which allows backlighting to be both bright and even.

Like most Razer products out there these days, the Razer Orbweaver is designed to be used with the Razer Synapse 2.0 software. No software is included in the packaging, but it can be downloaded through the Razer website. 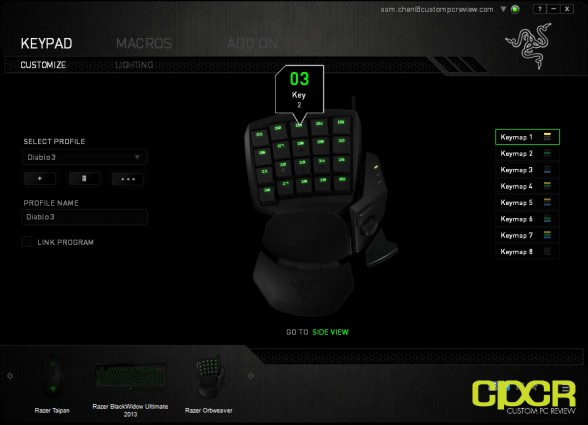 Despite how complicated the Orbweaver looks, it’s nothing more than a giant keypad for programming keys and macros, so there’s not much to the software. If you’ve ever used the Synapse 2.0 with any Razer mouse or keyboard, you should feel right at home with the Orbweaver. Simply create a profile on the left, choose a keymap on the right, and click each button to program them individually. By default, the keypad is programmed to act as the left side of the keyboard where you’d normally place your fingers. For example, button 8 is w, button 12 is a, button 13 is s, and button 14 is d. Get the picture? 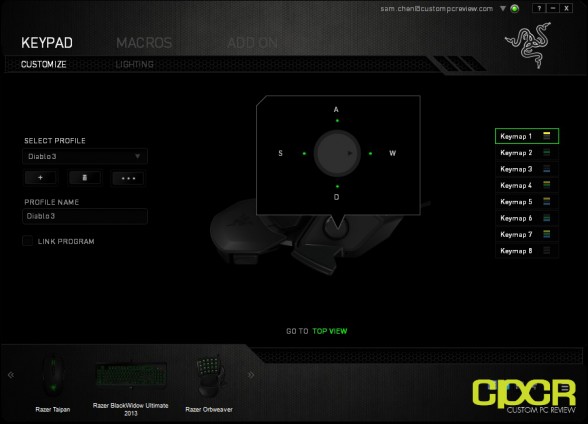 The d-pad along with the two buttons on the side of the keypad are programmable as well. It’s interesting using your thumb to walk around in Battlefield 3. Feels different compared to the usual WASD configuration. With the Orbweaver, the options are pretty limitless. 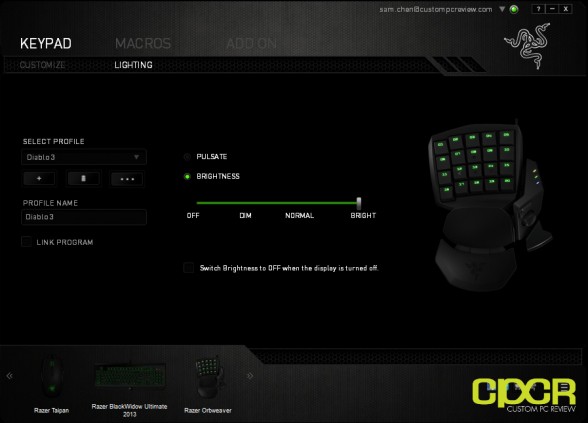 As mentioned earlier, the keys on the Orbweaver are backlit, so you do have the option of changing the lighting settings as well. The options here are fairly basic as you can choose between a couple LED brightness settings along with an option to have the lighting pulsate.

For performance testing, I tested the Razer Orbweaver in a number of different games to see if the keypad offered any sort of advantage while gaming.

For FPS gaming, I played some Battlefield 3 along with some CS:GO and overall I didn’t notice much improvement in gameplay. Since FPS gaming doesn’t benefit much from setting macros, I pretty much played the games using the default keypad setup. After spending about two weeks with the Orbweaver, I still can’t really say that I’m seeing much improvement in gameplay versus using a standard keyboard. The spacebar button on the Orbweaver is too light and the position of the thumbrest is too much of a stretch for my hand so it simply isn’t all that comfortable. The upper buttons, even with the Orbweaver’s palmrest at the shortest setting was still too far of a reach for my fingers so changing weapons was a bit difficult. I also generally use a bit of my palm to hit the CTRL button while using a standard keyboard, so there was definitely a slight learning curve to using my pinky instead.

The next game I spent some time playing was League of Legends, and being a game that pretty much only requires 4 keys on the keyboard to play, I didn’t notice any performance improvements here either. Given how difficult it is for my hand to reach the top row of buttons, I constantly found myself reaching for my keyboard instead.

Finally, I also played some Diablo 3 to see if a different genre of game could benefit more from the keypad and it didn’t really do much either. Diablo 3, like League of Legends just doesn’t require all that much in terms of buttons so I didn’t find much improvement moving over to the Orbweaver. 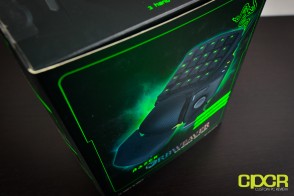 Alright, so after spending about 2 weeks gaming on this thing, I’d have to say that the Orbweaver (and I think the gaming keypad in general) is pretty cool, but it’s a very niche product designed for a very specific set of gamers out there. From the games I tested the keypad on, I didn’t see much of an improvement in my gameplay at all when compared to the good old keyboard. At least the Orbweaver can do everything a keyboard does and a bit more so if you’re willing to experiment, I think you might find a key combination or macro that would help improve your game.

That said, I could see scenarios where the keypad could be superior. While I no longer actively play MMOs, I could definitely see the d-pad for example be a great WASD replacement for walking around the map while still allowing the rest of your fingers to continue casting spells on the move. I’m also sure there are a ton of people out there much more creative than I on setting up macros and finding better uses for the Orbweaver, so I’ll just leave it at that. 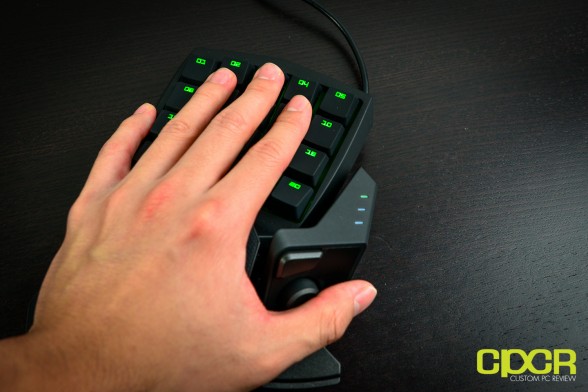 Alright, so with that out of the way, let’s talk about the Orbweaver itself. In terms of the design and comfort aspect of it, I think the Orbweaver slightly misses the mark – at least for me personally. As you can see above, my fingers have very difficult time reaching the top row of buttons, especially the 1 and 5 button which is nearly impossible for my smaller hands. While the Orbweaver can be adjusted in length by adjusting the wristrest, it’s still too long for me at its default length. Those with larger hands though, this may not be an issue. As with any gaming peripheral, your mileage may vary I guess. 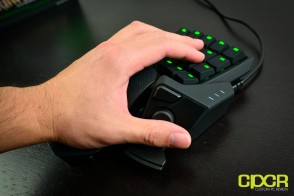 Speaking of the d-pad and the bottom button, I feel like the bottom button needs to be a bit stiffer. As it is currently, I feel that it’s way too easy to accidentally press the button as it’s simply too light. As for the d-pad, I think an analog joystick would be a lot better here, but I can see how having a d-pad can be useful in some applications that require higher level of accuracy such as switching weapons in game, so I guess it’s just a personal preference more than anything.

Pricing on the Razer Orbweaver is $129.99, which definitely makes it one of the most expensive gaming peripherals on the market. Even a full sized, fully backlit mechanical gaming keyboard like the Razer BlackWidow Ultimate 2013 is priced at $139.99, only a mere $10 more than the Orbweaver. Those who don’t yet have a mechanical gaming keyboard, I’d definitely recommend picking one up first prior to picking up the Orbweaver. You just get so much more bang for the buck.

So to answer my original question. Is the Orbweaver reason enough to forget about the keyboard? Personally, I say no – not yet at least. At this point, my reservations are simply comfort and cost rather than utility though. That said, I’m going to give credit where credit is due and mechanically, I think the Orbweaver is fantastic. I also think the concept of the gaming keypad is a good one as well. The Orbweaver really makes a lot more use of the thumb, which to me seems underused when gaming on a regular keyboard. After all, not all games even use the spacebar to begin with.

Hopefully with a couple minor tweaks, the next Orbweaver could finally be a compelling reason to ditch that silly old keyboard. Today, it’s only reason for a very specific crowd.