Since 2005, Noctua has been producing some of the most well known cooling products in the PC accessory market. Their most well known products are quiet fans and very large CPU coolers designed to be used by extreme PC enthusiasts who want to get the absolute most out of their air cooling solution. Today however, we’re going to be looking at something a bit smaller and a bit more compact from Noctua – the NH-L12 Low Profile CPU cooler, which is catered towards smaller form factor PCs such as mITX, mATX, HTPCs, etc. While there are similarly styled coolers on the market (even some from Noctua), most of those don’t go as far to cater to the small form factor crowd. 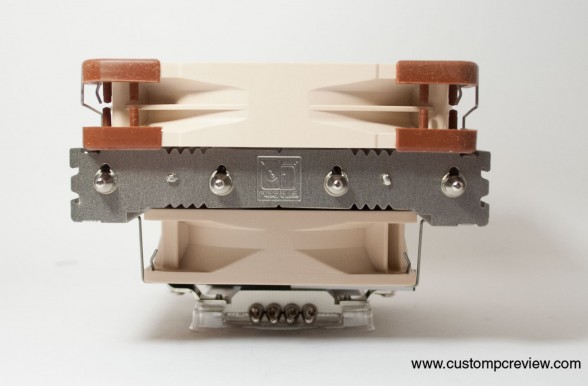 The NH-L12 isn’t your standard tower cooler as it’s built on the design idea that less is more. It’s built to be used in small, tight spaces such as small form factor computers, or SFF for short. As I said earlier, this cooler is styled similarly to other coolers on the market, as it is what’s generally called a C-style cooler. As you may imagine, the name is indicative of it’s C like shape. You have four heat pipes bending in an arch leading to the aluminum fins that sit directly above the base of the cooler. The NH-L12 is even capable of being used on a Mini-ITX system without needing a backplate.  The NH-L12 CPU cooler features one 120mm fan, as well as one 92mm fan, four copper nickel plated heat pipes, as well as a standard six year warranty provided directly through Noctua.

Before I go too far into this cooler, I want everyone to understand that Noctua has tried to make it very clear that this heatsink is not designed for an overclocked system. They have gone on record and made this statement:

Caution: The NH-L12 is a low-profile quiet cooler designed for use in small form factor cases and HTPC environments. While it provides first rate performance in its class, it is not suitable for overclocking and should be used with care on CPUs with more than 95W TDP (Thermal Design Power). Please consult our TDP Guidelines to find out whether the NH-L12 is recommended for your CPU. 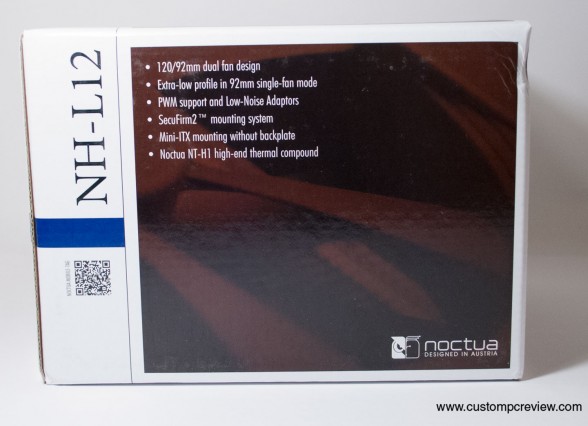 Jumping straight into this, we’re going to start off by taking a look at the exterior packaging. First, we’re starting with the front side of the box. It seems pretty basic, but features the standard Noctua styling that we’ve grown to know. We get a few tidbits of information from the front of box, letting us know that it has a 120/92mm fan design, an ultra low profile 92mm fan mode, low noise fan adapters, SecuFirm2 mounting system, Mini-ITX mounting without a backplate, and that they’ve included some of their NT-H1 thermal compound as well. 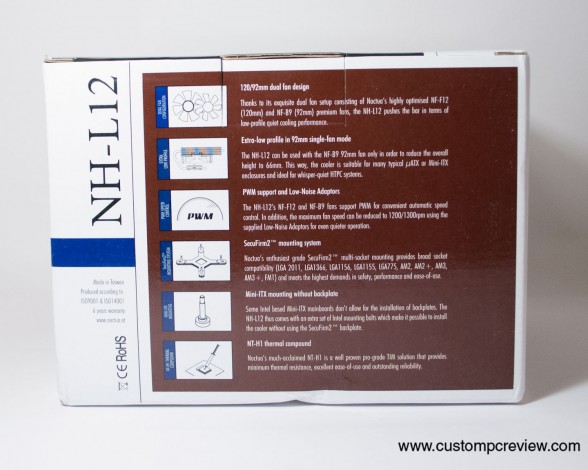 Moving around to the back of the box we can see all of the information from the front, but this time with small graphics to give you a visual representation of what they are referring to. 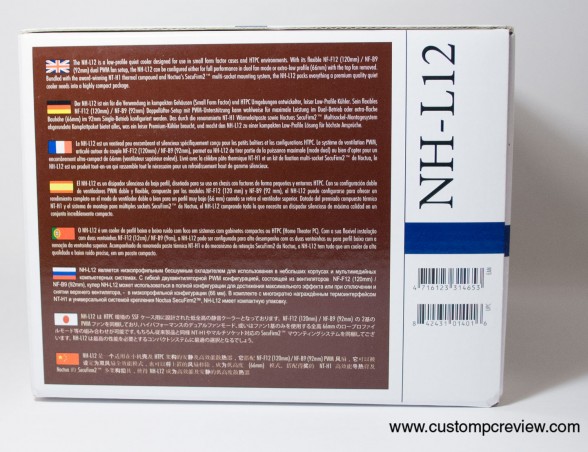 The left hand side of the packaging has a few sentences about the NH-L12 and it’s design. They are also listed in eight different languages. 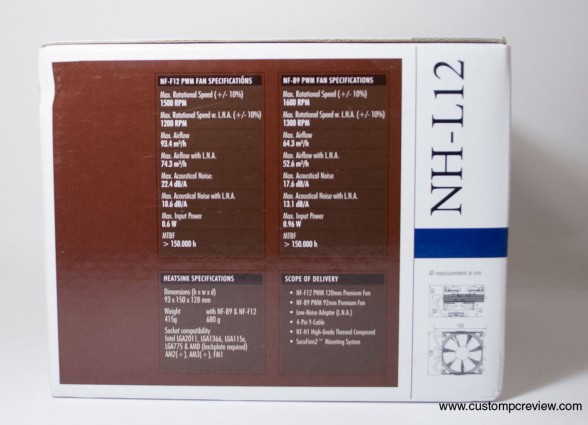 Our last look at the box just features the specifications of the cooler and included fans. 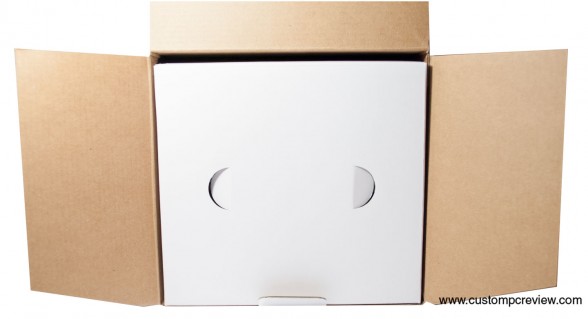 Without further adieu I’m going to get the box cracked open so we can all take a look at what’s inside. First thing we are greeted with is a white box, which holds all of our various mounting hardware, fan adapters, thermal paste, and other tidbits we may have in store for us. 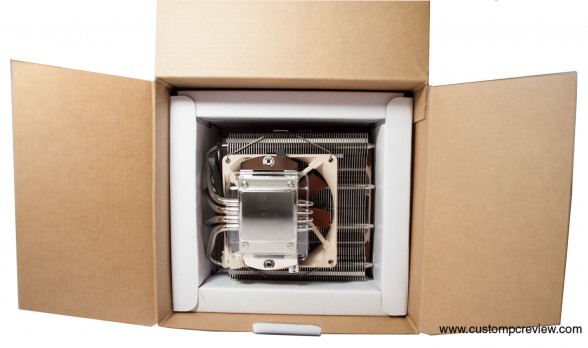 Once we get that box out of the way we are clearly able to see the base of the cooler, as well as the 92mm fan that came pre-installed. We’ll go further into that on the next page, so for now we’re going to focus on some other areas.

Once we opened up that accessories box we found all of these goodies. We have a phillips head screw driver, a small bag of various adapters, thermal paste and a case badge, our Intel mounting set, the AMD mounting set, and finally our owners manual and installation instructions for all the different sockets.

Once we got the cooler out of the box we were able to get a very good look at it, and it’s overall design. 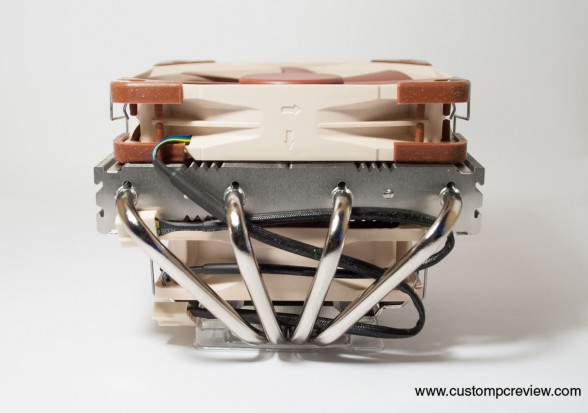 As I said earlier, the NH-L12 features four copper, nickel plated heat pipes, that are soldered directly to the aluminum fins. Here you can also see that your 120mm fan rests on top of the fins, while your 92mm fan sits above the base of the cooler.

The front side of the NH-L12 features the Noctua logo stamped into the aluminum fin that is exposed, as well as shows the four heat pipes protruding outwards. Here we can get a glimpse of the mounting for the fans, they are clip mounted and both fans are completely removable. 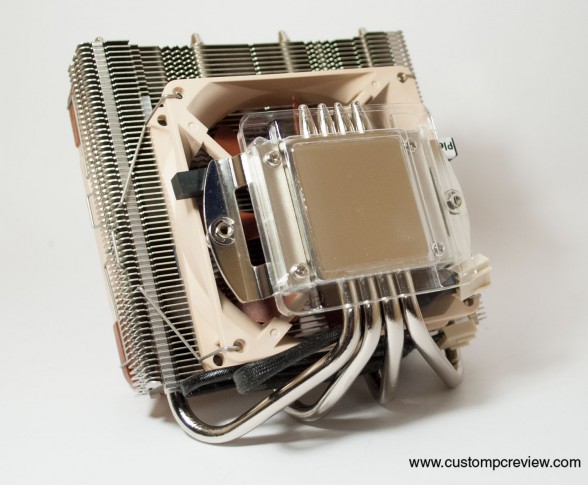 Once we flipped the cooler over, we are able to get a good look at the base. The NH-L12 has your traditional base, nothing over the top like heatpipe direct touch (HDT). 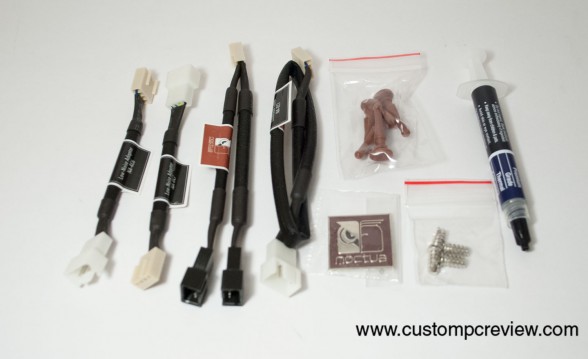 Now we’re taking a look at the included fan adapters and various other goodies we received with the NH-L12. We can see that we have two low noise adapters, which essentially just have resistors wired in the 12v line to reduce the amount of current flow going to the fan effective reducing it’s rotation speed and therefore it’s noise output. We also have a fan splitter, which allows you to connect both pulse width modulation (PWM) fans to a single motherboard fan header. Next is a four pin fan extension cable, in case your fan header isn’t within reach. They even included some fan mounting screws as well as rubber fan mounts in case you aren’t going to use the 120mm fan on the cooler, you can mount it to your case. All the way at the right we see the included thermal interface material (TIM). Also, Noctua has included a case badge for those of you who like to show off what’s inside your case!

Since we’re going to be using the NH-L12 in an Intel P67 based system, we are going to be taking a little closer look at the Intel mounting hardware. Included is your backplate, two mounting arms, your screws and washers for mounting via an ATX or mATX system, and lastly your Mini-ITX mounting gear. 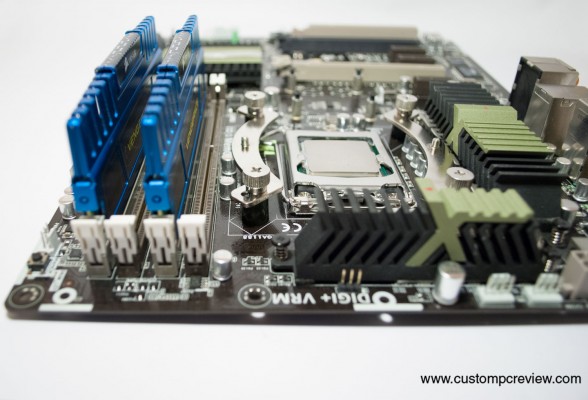 When you go to mount your NH-L12 cooler you’re going to start by putting your backplate on and selecting the proper holes for mounting to your socket. You simply place the long screws through the motherboard’s cooler mounting holes then drop a black spacer down. Next you place the Intel mounting bar on and screw it tight with the included thumbscrews. 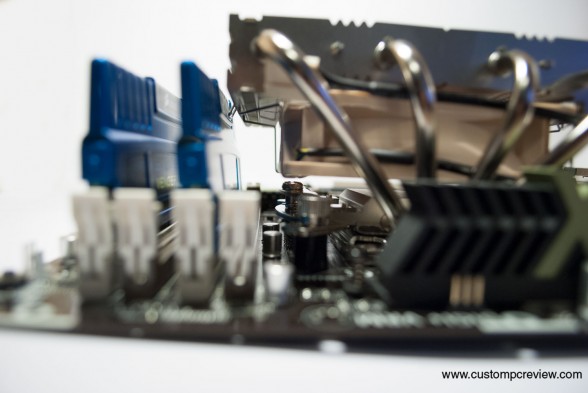 Then it’s as simple as screwing the NH-L12 to the mounting bars. There are two holes cut through the fins of the heatsink which allow your included screw driver to go down and tighten everything up. 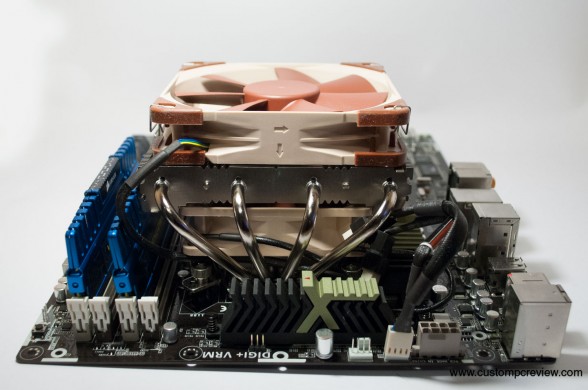 Once that’s complete, you’re done. The final product is definitely small and compact. I’ve tested virtually all types of CPU coolers and I can honestly say that the NH-L12 is the most compact cooler I’ve tested in a long time.

Today we’re going to be testing the Noctua NH-L12 on an Intel second generation Core i5 platform. 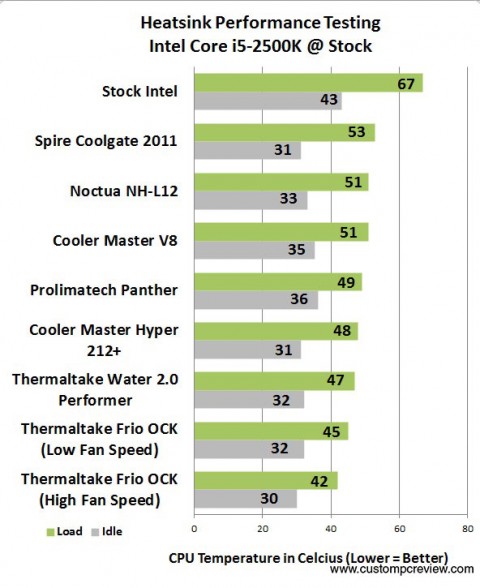 Looking first at our stock settings test, we can see that the Noctual NH-L12 measured in at 51 degrees under full load. This puts it right around the middle of our chart, but considering all the other coolers that I’ve tested have been twice as large as this cooler means that the Noctua NH-L12 performed exceptionally well for its size! 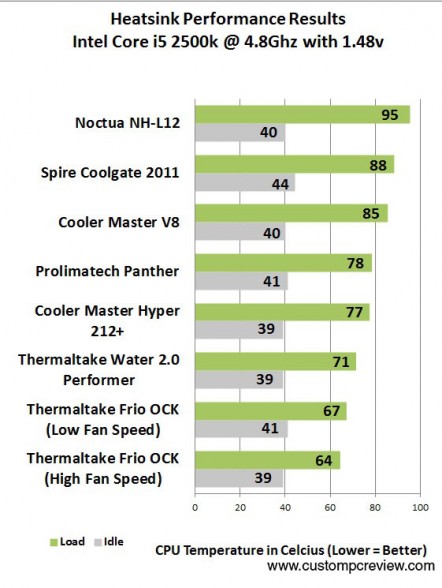 Now, I know what I said before about taking heed of Noctua’s warning about using this on an overclocked system, but what kind of enthusiast would I be if I didn’t try it and see what it could do? You can clearly see that it’s nothing to brag about, but it wasn’t designed to take that kind of heat at all. In fact, for the first few minutes I was surprised. It maintained an even 80 degree load for quite a while, but eventually the heat became too much and I was forced to stop my tests short.

Please guys, don’t put the NH-L12 in your computer thinking it can handle your overclock. This test is proof that Noctua knew exactly what they were talking about when they advised you not to try and cool an overclocked computer with the NH-L12.

Noctua has definitely done their homework with the NH-L12 low profile CPU cooler. With such a small footprint it’s surprising how well it was able to cool my Intel Core i5 2500k. The performance was on par with some much larger, and noisier, CPU coolers that I’ve tested lately. Throughout my testing of the NH-L12, the fans were never noticeably loud. You could hear them spin up, but it was never anything that was unbearably loud.

As far as the aesthetics go on the NH-L12, I can honestly say that Noctua has always made visually appealing CPU coolers in my opinion. Something about their color selection just makes them stand out and seem unique to me. The fan’s aren’t the thing that stood out to me however. It was the overall shape and design of the NH-L12. The C-style cooler is something that I’ve personally never tested before, so I was thoroughly surprised by how compact it was once it was unboxed and sitting in my hands!

The installation process for the Noctual NH-L12 was pretty straightforward. Then again, I’ve installed hundreds of CPU coolers over the years. For someone who’s never installed a CPU cooler the NH-L12 probably wouldn’t be my first cooler I’d recommend you trying to install. It wasn’t overly difficult, but I did have to fight to get the long screws from the backplate into position so that I could attach the thumb screws to mount the Intel mounting bar. Making the screws just a few millimeters longer would completely remove any hassle anyone would ever have with installing the NH-L12. The SecuFirm2 mounting system is definitely one of the better mounting systems I’ve come across, and hopefully Noctua won’t be doing away with it anytime soon.

The big question some of you are probably asking yourselves is “How much is the Noctua NH-L12?” Well, currently it’s available at Amazon for $69.99. Given that its not designed to be used in an overclocked system and is basically only good for your stock settings, some of you may find this to be a bit steep. However, the NH-L12 isn’t aimed at your average end user who just wants a monster air cooler. It’s aimed at your small form factor user who wants a silent machine without sacrificing performance. Also, don’t forget that at the $69.99 asking price you’re also getting that six year warranty from Noctua. The peace of mind of six years of reliability out of a product is probably more than worth it for plenty of users out there.

If you’re in the market for a low profile, low noise CPU cooler look no further than the Noctua NH-L12. It’s very easy to install, performs very well, and was virtually inaudible during my testing. The C-style design definitely comes with it’s limitations, but if you’re in the market for this small of a cooler you’re probably fully expecting some limitations when it comes to overclocking.

Special thanks to Noctua for making this review possible.

The Noctua NH-L12 CPU Cooler is currently available at Amazon.