The Need for Speed! 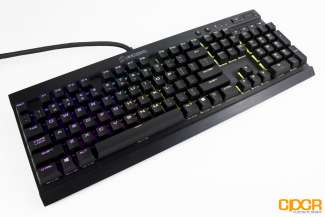 Mechanical keyboards have become fairly ubiquitous in today’s market. Likewise, RGB peripherals are pretty much a dime a dozen with pretty much every component company RGB-ifiying everything in their product lineup. From the typical RGB keyboards and mice, to the not so common RGB power supplies, RGB is everywhere, and it is likely here to stay. So, with that said, it’s probably not surprising that pretty much every new “gaming keyboard” does little but combine RGB lighting with mechanical key switches and call it a day. Offering little, if not nothing actually unique to gamers. I mean, what else is there to do?

Well, that’s what Corsair is attempting to answer with their Corsair K70 RGB RAPIDFIRE keyboard. As a follow-up to the wildly popular K70 RGB, the RAPIDFIRE has some big shoes to fill and some bold claims to back up. Corsair says the K70 RGB RAPIDFIRE is the “fastest mechanical keyboard there is” and while it makes sense on paper, whether it works in the real world is questionable. That said, it’s certainly an interesting proposition to competitive gamers looking for their next workhorse. 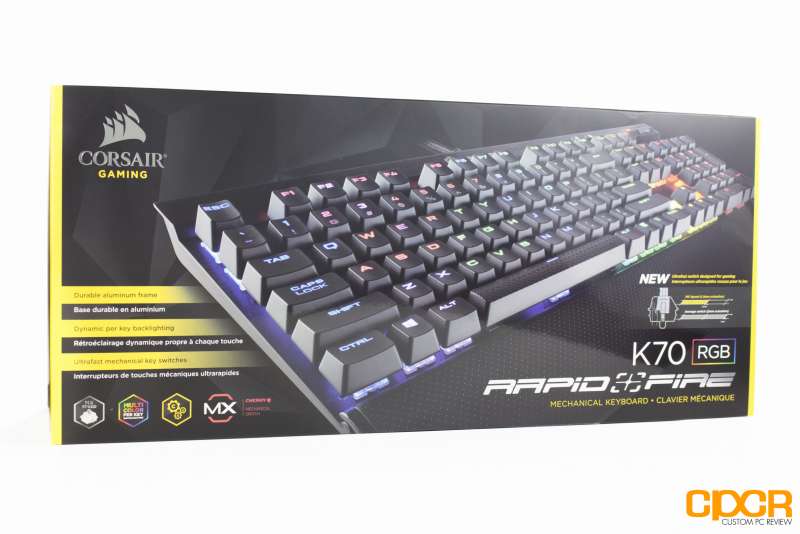 Here’s a look at the packaging for the Corsair K70 RGB RAPIDFIRE. At the front, we get a pretty nice scaled view of the keyboard itself in all its RGB glory, as well as a simple schematic of the Cherry MX Speed switches (more on that later). 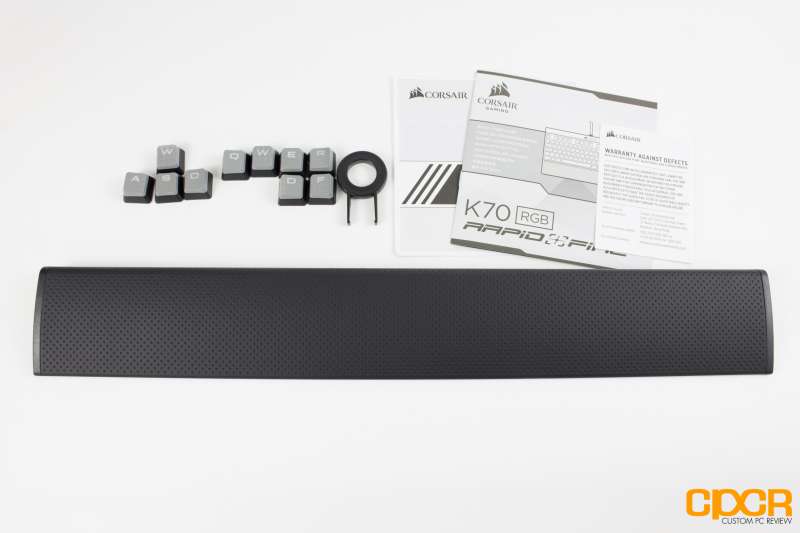 Taking a look at the included accessories, we have some instructions, warranty brochure, a keycap puller as well as two different sets of optional keycaps for either MOBA or FPS gamers. These keycaps are different from the standard ones in that they are gray in color, feature a textured finish for better grip and are raised along the edges to help you from slipping off while strafing, etc. We also have a nice detachable wrist rest. 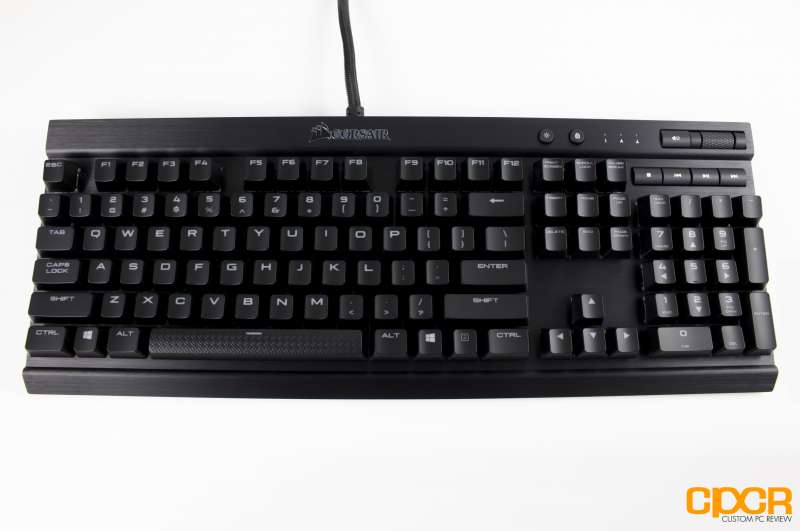 Finally, we have the keyboard itself. The Rapidfire follows the same design guidelines as the previous K70 RGB with a full brushed aluminum base which is all black (or really, dark gray) in color. We can also see that the spacebar is textured just like the optional keycaps, which is a nice addition but may irk some users. 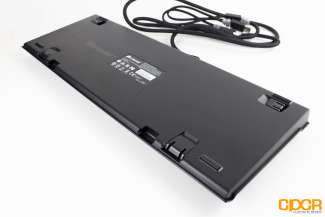 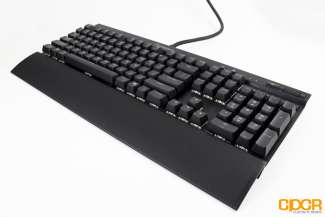 Taking a look at the bottom of the keyboard we can see that it features four rubber feet as well as two sets of standoffs which allow for adjusting the profile of the keyboard, increasing the height or creating an angled position. We can also see where the wrist rest clips on as well.

Included in the package is an adequately-sized wrist rest which is made of mostly plastic and features soft-touch rubber surface which features a dimpled-patten for added grid. I personally rather like this type of wrist rest and prefer it to one with more padding or a larger surface area. Of course, this is mostly subjective and your mileage may vary. 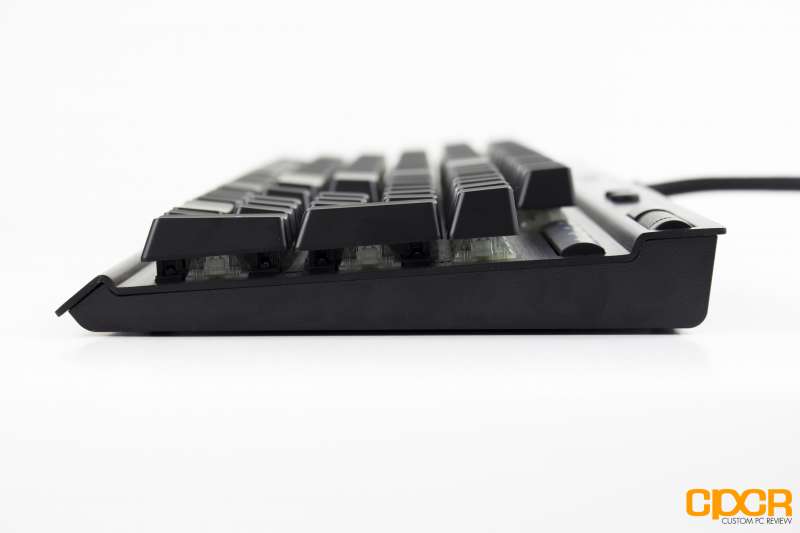 Taking a look at the side profile, we can see that they keyboard housing itself sits rather low, giving the keys a somewhat “floating” look. This is typical of modern, RGB keyboards as it allows for the backlighting to really shine through. It also makes it easier to remove the keycaps, with some not even requiring the use of a puller, depending on their position. 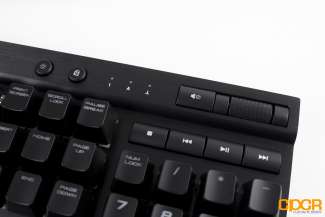 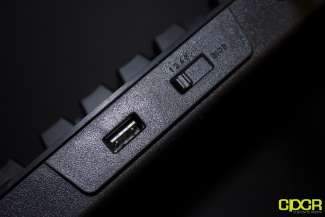 In addition to the standard 104 keys, the Rapidfire also features 5 dedicated media function keys as well as a volume wheel. There are also a pair of buttons for toggling on and off the Windows Flag key and controlling the brightness of the keyboard’s backlighting. The latter features four states: off, low, medium and high. Of course, this being an RGB keyboard, we’d imagine most users will want to keep the backlighting on.

At the back of the keyboard, we have a USB pass-through which is a new addition for the Corsair K70 RGB Rapidfire compared to the original K70 RGB. In order to take advantage of this port, you’ll need to plug in both of the USB cables into at least two USB 2.0 ports. If you don’t want to use the pass-through feature, you can use just one USB cable, but you’ll need to plug it into a USB 3.0 port in order to provide enough power to the keyboard.

Here we can also see a switch for adjusting the polling rate of the keyboard. The default state is 1 ms (1,000Hz) but it can be decreased to 2 (500Hz), 4 (250Hz) or 8 (125Hz) ms. This is mostly unnecessary for modern systems but can be useful for compatibility with some BIOs. 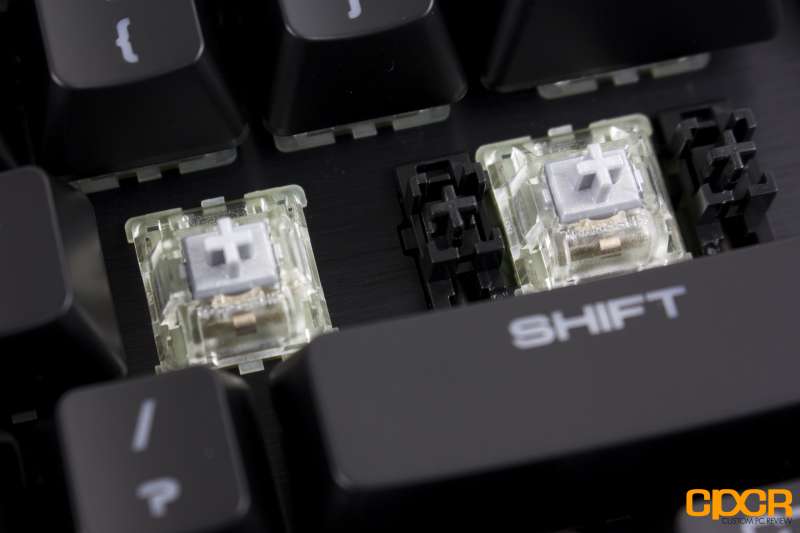 Pulling away the keycaps, we have a look at the Cherry MX Speed switch and the standard Cherry stabilizers for larger switches. 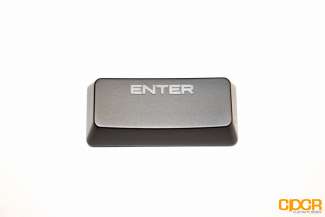 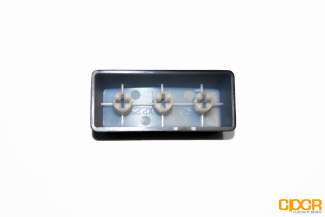 The keycap quality on the Corsair K70 RGB RAPIDFIRE is quite good, made of ABS plastic with laser-etching to reveal the backlighting underneath. They hold onto the switch stems quite tightly but are easily pulled out for replacement or maintenance. 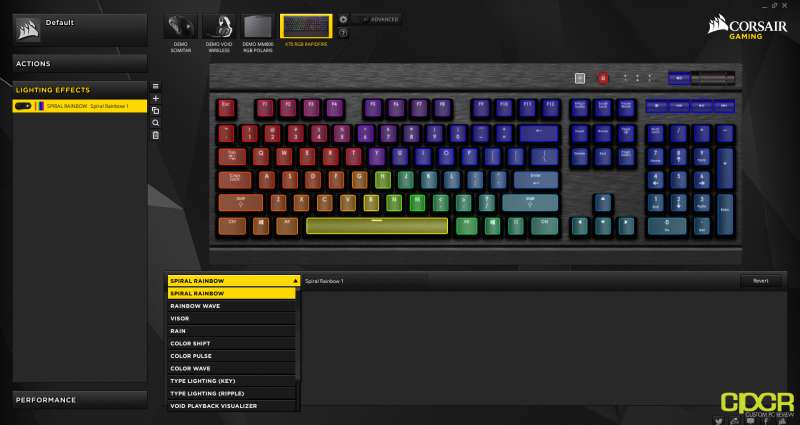 In order to customize the RGB lighting of their keyboards and other peripherals, Corsair includes their CUE (Corsair Utility Engine) software. This application allows users a wide variety of customization options ranging from simple to advanced lighting profiles, macros and other key configuration options. 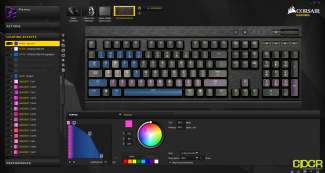 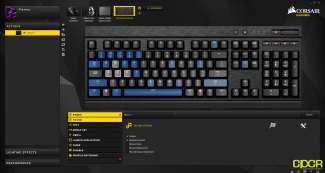 Pretty cool, right? Well, it’s not all sunshine and rainbows. Unfortunately, while the newer CUE 2 software does represent a vastly improved user experience over the previous version, it’s still far too complicated for a piece of software for your keyboard.  While the built-in “Help Text” tutorial does help, it’s still something I find a bit too “easy to learn, difficult to master” and I think most users will likely rather spend their time actually playing games than fiddling with their keyboard’s software.

Further, the the fancy lighting schemes enabled by the CUE software will not stick when the software isn’t running. This means if you close CUE, your keyboard will revert to a simple static red configuration until you restart the software again. This is something that has apparently been rectified by the newer Corsair K95 RGB Platinum but is still an issue for the rest of the lineup, including the Corsair K70 RGB RAPIDFIRE. 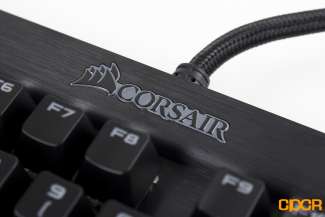 Being a linear-type switch, the Cherry MX Speed switches feel very similar to that of other linear switches such as the Cherry MX Red.  These Speed switches are built with quick movements in mind as they offer little resistance thanks to the 45gs of actuation force, and just 1.2 mm of key travel to the actuation point. This means that keypresses register faster than they would compared to Cherry MX Red (2 mm) switches. Although, this is at the potential cost of accuracy, as it is quite a bit easier to register a misclick with these switches.

As you can imagine, the low actuation force combined with the much lower actuation point make the Cherry MX Speed switches great – and possibly, the best – for gaming. If you like gaming on Cherry MX Reds, you should love gaming on these switches. I loaded up some of my favorite competitive shooters such as Rainbow Six: Siege, Battlefield 1 and Gears of War 4 and had no issues performing at my usual (fairly sucky) level.

Typing on the Corsair K70 RGB RAPIDFIRE wasn’t bad, but the lack of tactility afforded by the Cherry MX Speed switches may be an issue for some typists. I personally typically prefer typing on Cherry MX Browns, but had no major issues typing on the RAPIDFIRE. That said, I did find myself mistyping a bit more compared to my usual keyboard I can’t say whether that it entirely due to the switches or just adjusting to the keyboard. Still, if you’re a typist first, you may want something like a Cherry MX Brown or Cherry MX Blue switch.

To test the NKRO/anti-ghosting functionality of the Corsair K70 RGB RAPIDFIRE, I’ll be using a web app developed by Microsoft’s Applied Science Group. More information about the web app and the relationship between ghosting and NKRO can be found here.

While I did not have a large enough book on hand, being the resident GPU reviewer, I used the tools I had and dropped a Radeon RX 480 onto it. The results are what you’d expect from a premium mechanical keyboard in that it has full NKRO.

At the start of this article I said that the Corsair K70 RGB RAPIDFIRE had some big shoes to fill, and after a detailed look at it and prolonged daily use, I have to say it has done so with ease. Not only does it keep everything that works so well about the older K70 RGB, but it improves on the areas where it fell short such as the inclusion of a USB pass-through and an improved (but still somewhat flawed) customization software with CUE 2.

The design of the keyboard is quite nice, and the build quality is outstanding. The brushed aluminum front plate gives the keyboard a sophisticated, premium look while making it durable enough to carry with you to events such as LANs without worrying about breaking easily.  This also doesn’t add too much to the overall weight of the keyboard, which also helps for transport. 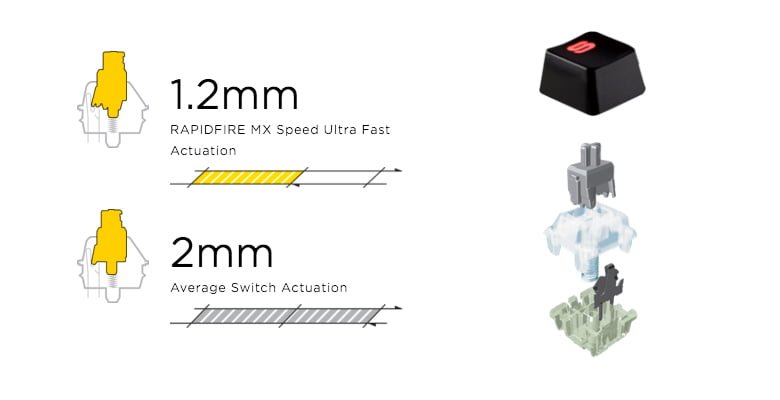 The typing and gaming experiences are both quite good, but I’d say the keyboards strength lies mostly in the latter as its linear switch-type and ultra fast actuation may be off-putting to some typists, and can definitely cause a bit of inaccuracy due to misclicks. If you’re a gamer who types, this keyboard is easily one of the best choices available for you, but if you’re a typist who games sometimes, you may be better suited by a more traditional switch-type such as Cherry MX Brown or Blues. Still, the Cherry MX Speed switches are quite good at what they were built for, and I’m certain that if you’re someone who likes Cherry MX Reds, you’ll love these switches even more.

The Corsair K70 RGB RAPIDFIRE is not without issue though, although these may be smaller nitpicks I personally wish the cable was a bit less thick and was able to be re-routed to the left or right side of the keyboard to allow for more user customization. I also wish the keyboard remembered my settings without needing to leave the software open, given the introduction of the Corsair K95 RGB Platinum, I’m sure this is something that will be rectified in the next iteration of the Corsair K70 RGB, but I can’t help but feel this was a missed opportunity this time around. Also, if I’m nitpicking, the large print typeface on the keycaps is a little… ugly. I realize this is a small gripe, and highly subjective but I mean this is my review, so.. deal with it!

With all that said, it is clear to me that Corsair has a real contender here in the premium mechanical gaming keyboard market. The Corsair K70 RGB RAPIDFIRE is easily one of the best choices for gamers looking for the absolute bleeding edge and want to eliminate as many milliseconds as they can from their response times. At $169.99 the Corsair K70 RGB RAPIDFIRE isn’t cheap, but if owning the fastest keyboard out there is the primary concern, it’s easily recommended.