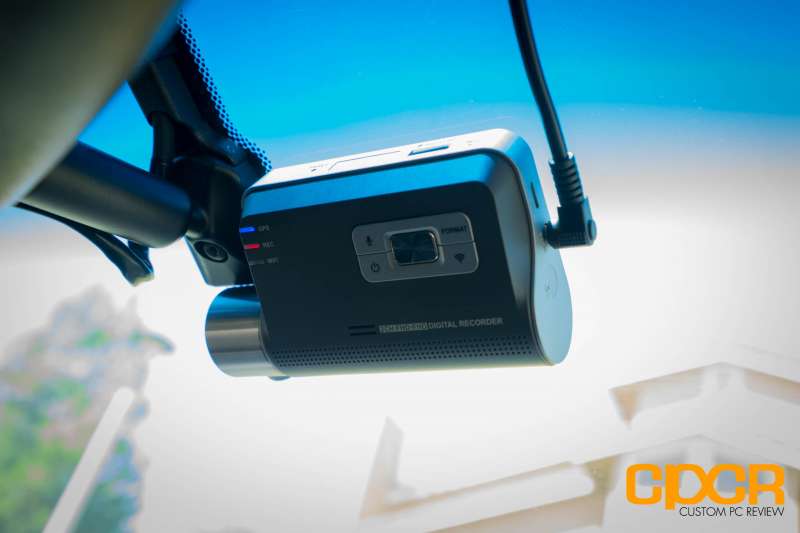 Several months ago, we reviewed the Thinkware X550 and walked away quite impressed. While some of the driver safety features were a bit more gimmicky than Thinkware would have you believe and the pricetag is relatively higher than competing dashcams on the market, the Thinkware X550 still proved to be an excellent dashcam with great picture quality and more importantly the ability to record well at night which is an issue for many of the cheaper dashcams on the market. 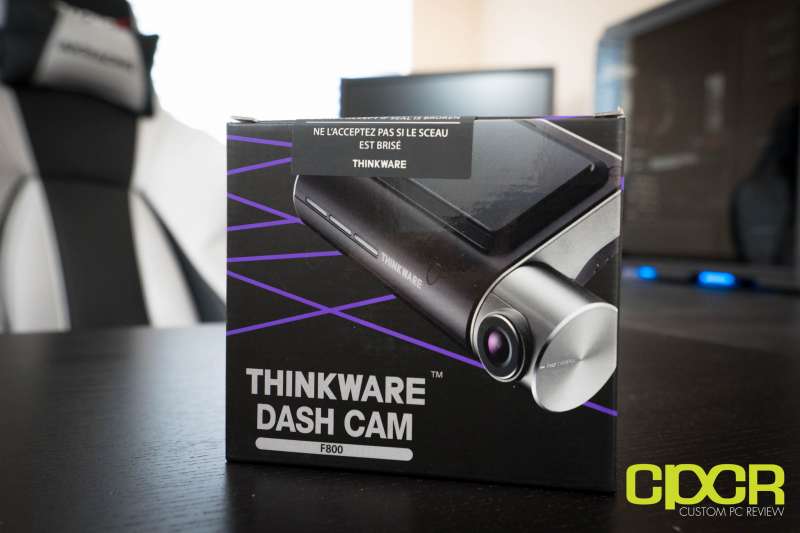 Here’s a look at the packaging for the Thinkware F800. 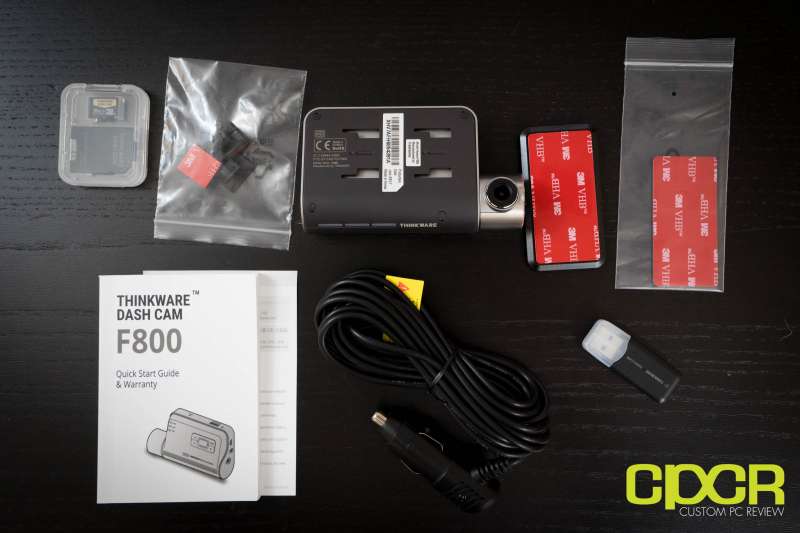 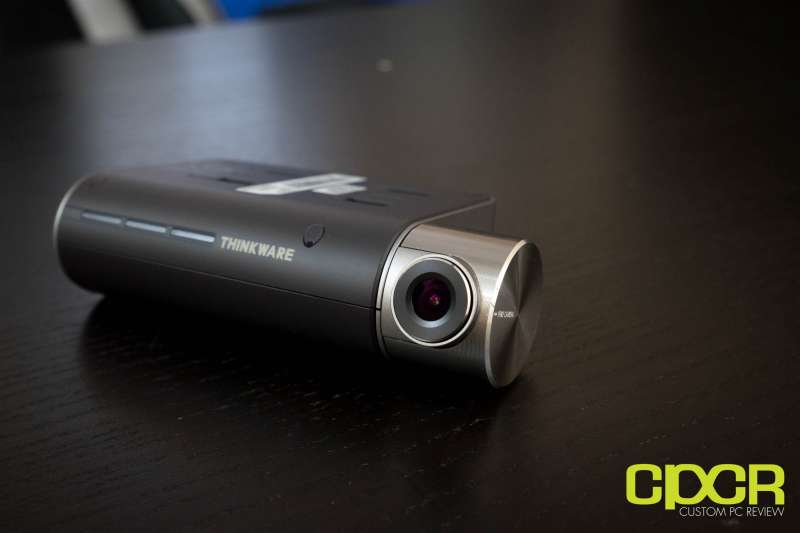 The Thinkware F800 is a fairly compact dashcam featuring a 1080p Sony Exmor R Starvis sensor based camera outfitted with a 142° (diagonal) wide angle lens. As the camera is mounted using a fixed top mount, the camera itself swivels up to about 90 degrees for adjustment. The design of the camera is relatively small making it a good candidate for stealthy installs although the silver accents do somewhat give it away. 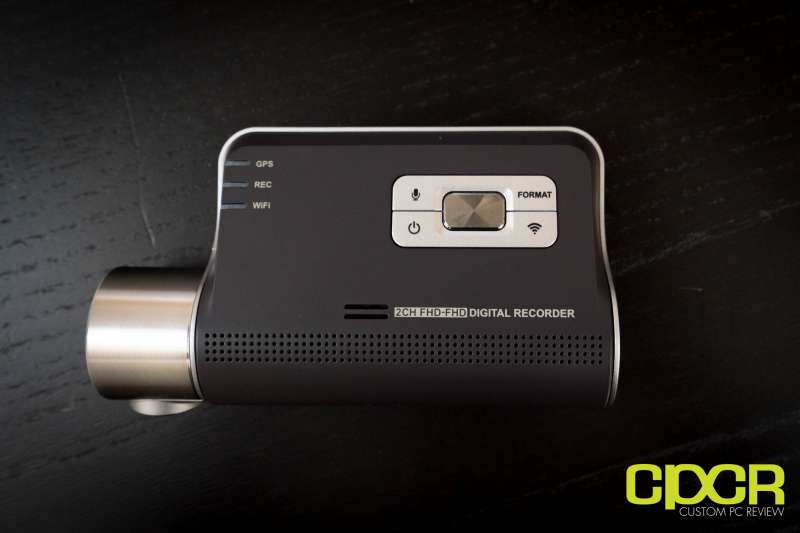 At the bottom of the dashcam is all the controls, which include a power button, WiFi button, microphone on/off button, format button and record button. There’s also a speaker as well as indicators for WiFi, record, and GPS.

At the rear of the device is a reset button, a port for the microSD card and the microphone. At the right side of the device is a video in port for a rear camera which is sold separately, a DC-IN port for power, and a GPS port. At the top is a large empty surface with mounting points for the mount. 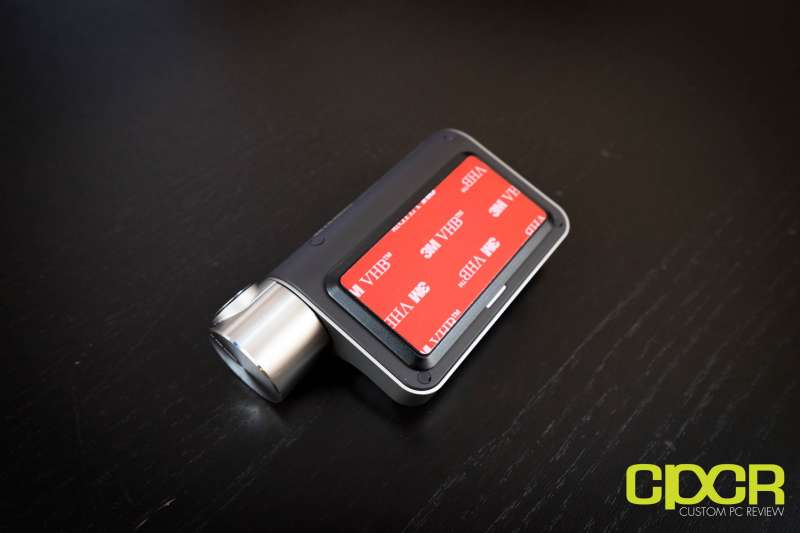 Here’s a look at the adhesive mount for the Thinkware F800. It’s quite a large mount and included is 3M VHB adhesive, so make sure you have the placement correct as once it’s installed, it’s probably not coming back off. Unfortunately, Thinkware does not sell a suction cup mount for those who want to use the camera on multiple vehicles. If this is the case, a second mount should be available for purchase. 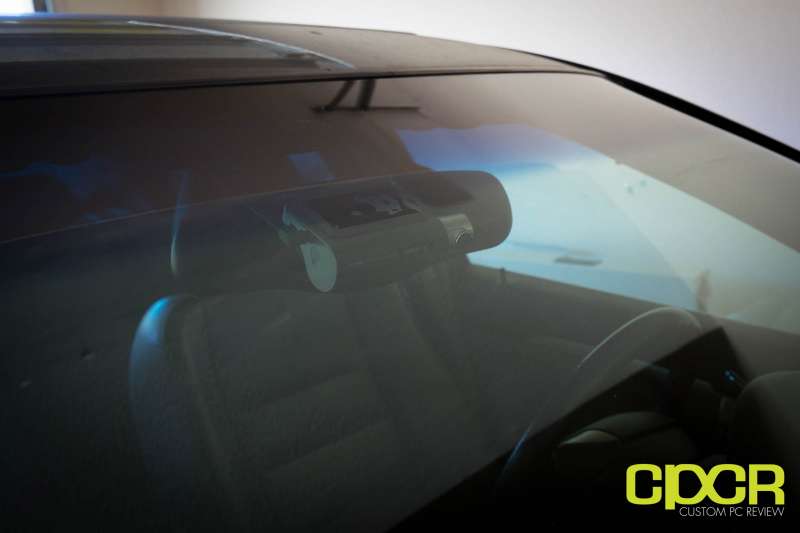 Installation of the Thinkware F800 is fairly easy. Thinkware provides a mount for the dashcam which mounts on the windshield using an adhesive mount. Then simply connect the F800 to the mount, connect either the cigarette lighter plug power adapter or hardwire kit to provide power to the camera.

When mounting, it’s highly recommended to turn on the dashcam and use the live viewer through the app to ensure the mount is placed in the correct orientation as the exceptionally powerful adhesive does make the mount difficult to remove after it’s installed. 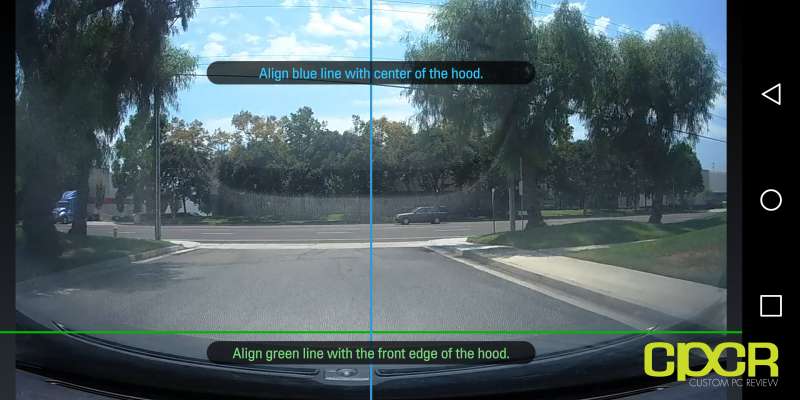 After installation, usage of the Thinkware F800 is pretty much self explanatory. Once the vehicle is turned on, the camera will automatically begin to record and once the vehicle is turned off, the recording stops. The F800 also includes voice cues to let you know when recording has started. For those with the hardwire kit installed, the Thinkware F800 will also let you know when parking mode is engaged and if any incidents occurred while you were away.

Daytime video quality is acceptable however, one issue I experienced was that the heavy video processing made the video a bit grainier and blurrier than expected. While this isn’t a huge issue as license plates can still be read without issue, daytime video quality could be better.

Nighttime video quality is acceptable as well although once again the video was both grainy and blurry due in large part to the heavy video processing. That said, license plates can still be identified although it’s much more difficult than it should be. In instances where the license plates are lit by the car’s lights, the plates are blown out, which will make them unreadable. This is a bit of a letdown as the Sony Exmor R Starvis sensor is supposed to be very good for nighttime video recording however, in testing the better nighttime video recording capabilities appear to simply be boosted exposure and additional software processing to reduce noise rather than the capabilities of a superior sensor.

Microphone sound quality on the Thinkware F800 is relatively good and captures sound very well. Like the X550, if any of the driver safety features go off during the recording, the alert sound will be recorded extremely loud due to the proximity of the microphone and the F800’s internal speaker. 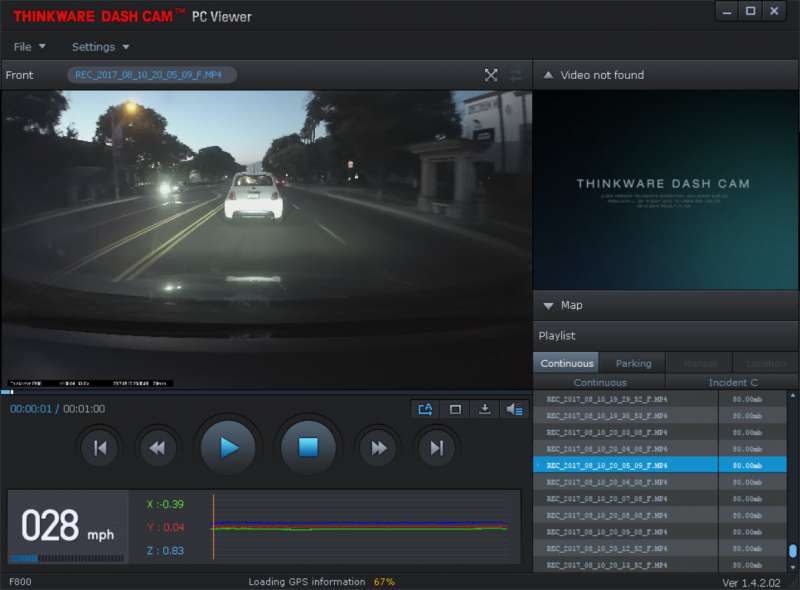 The Thinkware F800 also includes a companion mobile app. Here’s a look at the Android version of the app.

The app connects to the Thinkware F800 using a WiFi connection by setting up your smartphone as a WiFi hotspot. From there, the app is able to liveview the camera, change settings, view videos, etc. 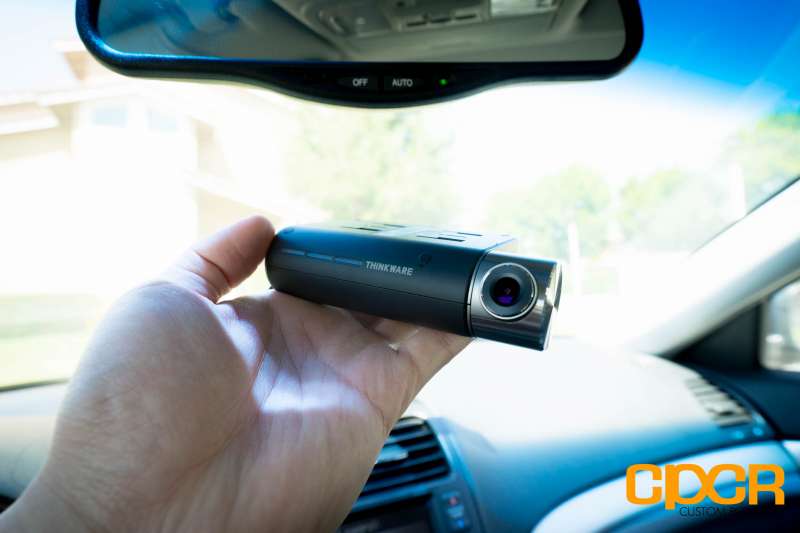 Having had the opportunity to test the Thinkware F800 over the past few weeks, my thoughts on the new camera are overall positive with my main issue with the camera being the video performance which wasn’t nearly as good as expected.

The main issue with the Thinkware F800’s video performance is the extremely heavy and apparent video processing. True to the marketing literature, the Sony Exmor R STARVIS sensor in the F800 is very good in low light. However, in order for the camera to achieve its ability to see in low light, the sensor and image processor heavily boosts the exposure and add a heavy layer of noise reduction. While this improves low light visibility, the image processing severely degrades video quality in the daytime and at night making numbers and signs that shouldn’t be blurry look blurry and difficult to see. While license plates, vehicles, and people can still be identified, video quality is not remarkable by any means.

As far as reliability, the Thinkware F800 was free of any issues during the course of my testing. During the few weeks I’ve been using the Thinkware F800, the camera had been exposed to numerous 100ºF+ days in the Southern California heat and not only maintained operation with the vehicle on, it also maintained operation while the vehicle was off and in parking mode. According to Thinkware, the F800 does have an auto-shutoff feature when it’s overheating however, this was not something that occurred during testing.

As with many other premium Thinkware dashcams, the Thinkware F800 also includes many driver assistance features collectively known as ADAS, or Advanced Driving Assistance System. This includes FVDW (Front Vehicle Departure Warning), LDWS (Lane Departure Warning System), and FCWS (Front Collision Warning System). With the F800, Thinkware has significantly toned down the notifications as LDWS is not just a quiet knocking sound, and FVDW and FCWS now a single alert sound. While this is useful for those that are inattentive while driving, most users will likely find the alerts more annoying than anything else.

The Thinkware F800 is currently available online for $299.99 just for the front camera itself. The yet unreleased rear camera is likely going to be another $99.99 which is what the rear camera for other Thinkware dashcams cost and the hardwire kit [easyazon_link identifier=”B00NC062E8″ locale=”US” tag=”cupcre06-20″](Thinkware TWA-SH)[/easyazon_link] is available online for just under $24.

Overall, the Thinkware F800 is a good dashcam. While the overdone video processing does detract from its video quality, the Thinkware F800 still provides usable video in the event of an accident, has decent night-time recording capabilities, is reliable, can support front and rear cameras, and features not only the capability of recording while the vehicle is in motion, but also when parked. Those looking for a dashcam for a stealthy install will find the Thinkware F800 a great choice.