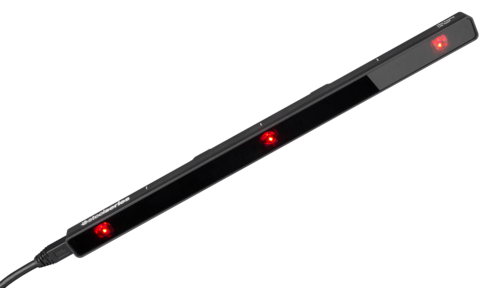 With CES 2015 right around the corner, SteelSeries recently surprised us with the announcement of their Sentry Eye Tracker.

The SteelSeries Sentry Eye Tracker, a product we first heard about at E3 2014, attaches to the bezel of your monitor and tracks your eye movement at 50 frames per second using its three sensors. It then translates the detected movement on-screen, giving the user a visual trace of his eye movement. SteelSeries believes this can help gamers review their replays more effectively by allowing them to analyze what they focused on throughout the game.

Streamers who enjoy creating tutorials will also benefit from the Sentry. By incorporating eye movement into their videos, it brings the viewers closer to the streamer’s perspective. Players looking to learn from these videos will get a much better idea of where the streamer was looking as they played.

Currently, the Sentry only supports a total of just two titles: Dota 2 and StarCraft 2, but they’re two of the hottest titles being played in the professional eSports scene right now. With SteelSeries choosing to give these two titles priority support, it’s clear that SteelSeries is targeting the competitive eSports scene as its main audience for the Sentry.

On top of being an analysis tool, SteelSeries is also working closely with Tobii to use the Sentry as a method of input. Tobii Technology, for those who are unfamiliar, is a company specializing in eye tracking technology. Their products have been widely used in medical research.