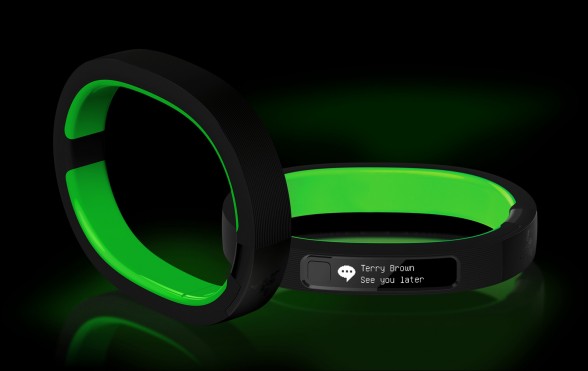 Earlier this year, we visited Razer at CES where they showed us an early prototype of the Nabu smartband, which as of a couple days ago would become Razer’s first entry into the wearable devices market. During the show, wearable devices had been quite a hot topic with seemingly everyone trying to break into the space, but thanks to the Nabu’s unique blend of social, smartwatch, fitness tracking capabilities, and an almost cult-like following of loyal customers, it earned a Best of CES People’s Choice award, beating more than 40 finalists to the top spot.

For those who missed the coverage earlier this year, the Razer Nabu is essentially a fitness band type of device that’s designed to be worn around a users wrist. There’s a small LED panel which can deliver notifications from a smartphone and the entire unit is made from IP54 certified hypo-allergic material to guard against moisture and allergies. Although the Nabu has limited functionality as a stand alone device, it’s designed to be used in conjunction with a smartphone. Through a wireless Bluetooth connection, it will be able to communicate with iPhone 5, 5S, 6, 6 Plus as well as Android 4.3+ smartphones. Razer expects the smartband to last a very respectable ~7 days on a single charge.

Like most other smartbands, the Nabu does most of the usual things you’d expect such as tell time, track a user’s sleep pattern, track distance traveled, track activity, provide notifications, etc., but the coolest  feature that makes the Nabu what Razer calls a “Social Wearable” is Razer’s Pulse wireless communication technology. Pulse allows Nabu wearers to exchange stuff like Facebook and Twitter information with a simple high-five or a shake of the hand, which is pretty neat. Of course, I imagine that this can be turned off in the Razer Nabu app for more privacy conscious users although it would remove one of the biggest selling points of this device.

If that sounds like an awesome product to you, well apparently so did a ton of others as Razer recently launched an initial wave of 5,000 Nabu pre-orders for on December 2, which was sold out within a mere 15 seconds. According to a post at Razer Insider however, Razer will be readying wave 2 of pre-orders shortly, so you probably won’t have to wait too long to get in on the next wave although a specific timeframe wasn’t available at this time. Retail pricing on the Razer Nabu is expected to be $99.99 and those interested should check out Razer Insider for more information.