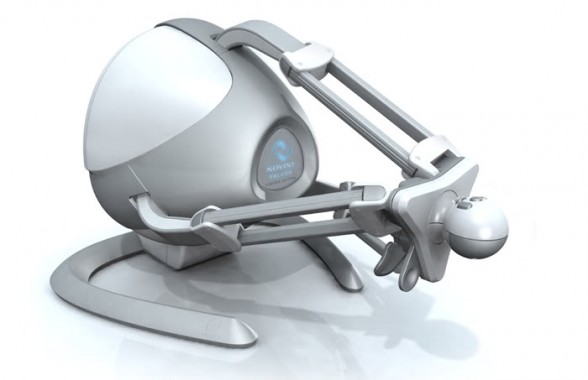 Gaming peripherals are at an all time high in the PC market. Mice, keyboards, controllers; it seems every gamer is looking for THE hardware to customize his/her experience and give them the added edge in gaming. The Novint Falcon is a step into the added immersion of a game and utilizes a unique motion control that hasn’t been seen before in mainstream gaming.

The Novint Falcon was originally released in 2007 and went primarily unnoticed by the gaming community at large. Still supported today, the Falcon includes support from some of the most popular games on the market; such as Half-life 2, Battlefield 3, Diablo III, and Skyrim. This strange little device immerses the gamer into the game by adding force feedback, a unique form of control, and perhaps most interestingly, introducing weight and texture into gaming. The Falcon adds dimension into control by allowing the user to manipulate the controller along three axes: x, y, and z. The moveable arms give the user a wide range of motion allowing for both precise and quick movements.

Ever since Half-Life 2, games have constantly been adding items and miscellaneous bits around the world that can be picked up and manipulated through a physics engine. When using the Falcon, the weight of each item truly comes to life as the moveable arms create resistance, simulating the weight of what your character is holding. This level of immersion is truly something unseen in the gaming world and would offer a lot to physics based games such as Portal or Amnesia. Further, this device attempts to add to the realism in games like Amnesia by simulating the opening of doors, manipulation of objects, and solving of puzzles.

In regards to force feedback, the Falcon touts its ability to simulate a realistic style of recoil in first person shooters while allowing the user to customize the intensity. The Falcon also has the ability to switch grips from a sphere to a pistol. The pistol grip is, obviously, designed mostly for FPS games in mind and allows for a more realistic feel when ‘pwning n00bs’ on the battlefield. These little details make this device geared towards as much immersion as possible.

One of the cooler features of this device, though, is outside of the game. The Falcon can be used as a replacement for the mouse for all of your day-to-day tasks in Windows. What’s perhaps the most interesting feature is how the Falcon can be used with a 3D rendering program (downloadable for free off of their website) . For 3D animators or modelers, the Falcon may be a dream come true, dropping the two axis mouse and moving to a more tangible work space.

While the Falcon doesn’t support every game in the market, Novint is definitely dedicated towards getting the latest and greatest game support. As the device has been out for many years, it doesn’t seem like it’s going to flop and fall the wayside any time soon. At a $250 price tag for the full bundle with pistol grip and normal grip, this is definitely something for those looking to add a little spice to their games.

For more information about the Novint Falcon, check out Novint’s website here.