Bethesda held their first E3 press conference a day before E3 started and while it’s too early to say for sure, they may have just stolen the show.

After last week’s teaser trailer for Fallout 4, the popular software company provided an early peek at some of the new features of their long running series. Improvements include the inclusion of a non-silent protagonist, the ability to build and maintain forts and bases, as well as various graphical improvements and a new engine. A companion iPhone/Android application was also announced, providing the player with access to their in game Pip-Boy. 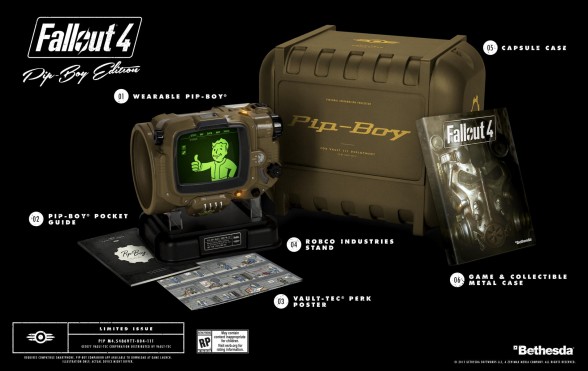 For the collector, a special edition of the game includes a life sized replica of the in-game apparatus, allowing vault hunters to pop their phones in and strap it to their wrists. Rumor has it that it acts as a form of contraceptive if worn in public.

A mobile game titled Fallout: Shelter has also been released for iOS, with an Android port being developed.

As hinted at from its brief trailer, some Doom gameplay footage was also shown off to the public. Promising faster gameplay, multiplayer, and a new Snapmap customization option where users can upload their creations to the newly announced Bethesda.net, housing any content and mods generated by users across all platforms.

Additionally, some more new announcements include Dishonoured 2, a remastered edition of the first game for next generation consoles, and a new Hearthstone-esque card game titled The Elder Scrolls: Legends.

So far it’s been a strong opening to what should be an exciting E3. Stay tuned!