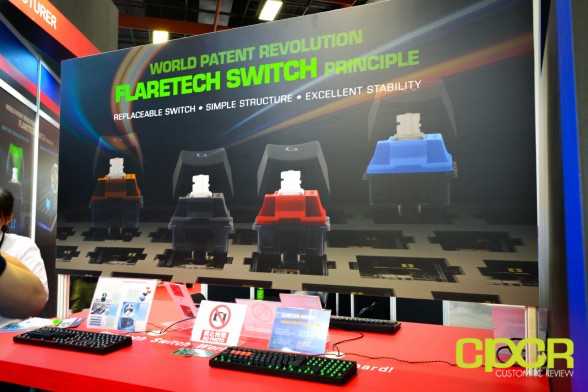 Adomax’s Flaretech infrared keyswitch could be the next big thing to come to keyboards.

Rather than a traditional mechanical switch, the Flaretech infrared keyswitch uses a different method of input detection – infrared light. Up till now, keyboard inputs have been binary in nature: the switch either sends a signal when it travels to the registering distance (closed circuit), or sits at its resting state where there’s no input (open circuit). However, Flaretech infrared switches have vertical infrared sensors embedded in the baseplate underneath each switch. They not only detects when a key is pressed, but also how far it’s been pressed. Thus, it’s capable of detecting how far a key has traveled. This is similar to how a joystick responds more aggressively when slammed to the edge compared to tilting it slightly. If it works as flawlessly as the Adomax says, the Flaretech infrared switches could really offer an innovative twist in games such as racing for example, which demands precise, incremental inputs. 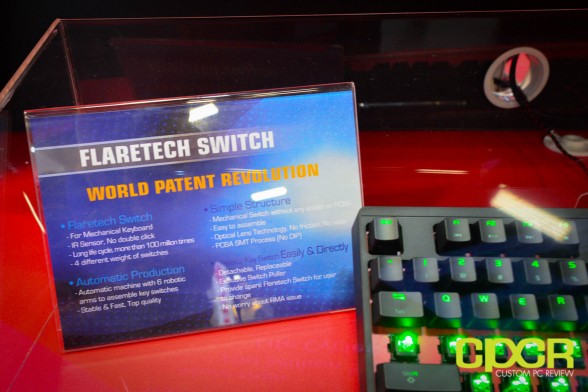 … But that’s not all. the Flaretech switches come with many more benefits over its competitors. Because it uses infrared light, the response time is also significantly lower than mechanical designs. The backlighting now shines through the optical stem to even illuminate the entire key. Adomax also simplified the repairing process by allowing the whole switch to be removable from the baseplate via a simple tool. This also means that you get to mix and match different switch flavors depending on your needs. Finally, because the infrared sensor is in the base plate, it greatly decreases the complexity of the switch, which allows them to be rated to last over 100 million keystrokes each.

Unfortunately, these switches can only be found on sample models Adomax had at their booth, but speaking with Adomax representatives, a number of unspecified big name peripheral makers have stopped by their booth expressing interest in the technology so we should be seeing keyboards with this new technology by the end of this year.