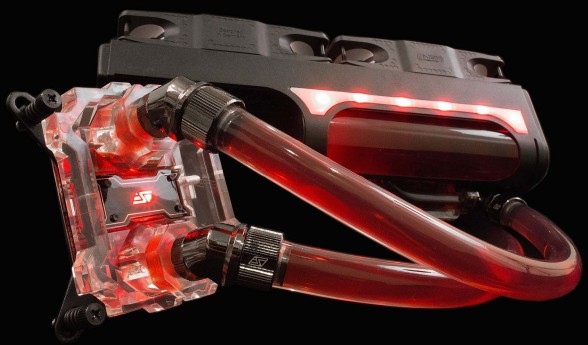 The new products feature an completely redesigned radiator+reservoir+pump combo which consists of a large clear acrylic tube-shaped casing, which displays the inner workings of the system’s pump. The radiator comes in three sizes: 240mm, 280mm, and 360mm in length. The kit also includes Swiftech’s all-new Apogee XL2 CPU waterblock which features a chrome-coated copper base plate and a redesigned housing with “enhanced flow characteristics for better hydraulic performance.”

The housing is made of a clear acrylic material, and the tubing is also clear. This allows for the newly implemented RGB ALED lighting system to fully light up the coolant for a radial glow. The “Prestige” version of the kits includes all of the above features, but also include upgrades for added performance and silent operation. These features include Noiseblocker eLoop fans, and the use of Lok-Seal black chrome compression/rotary fittings throughout the assembly.