With the fairly immanent launch of next-generation Radeon graphics cards, PowerColor is stepping their game up with a new line of “LCS” liquid cooled graphics cards. While the company did not have any specific GPU models on display, they did have a prototype of the new liquid cooling solution, which seems to be developed in partnership with DEEPCOOL. The new LCS cooler consists of a large 360 x 120 mm radiator, with full braided hoses that break out into both a full cover, copper water-block and a CPU block, which means this AIO cooling solution can be used to cool both the GPU and CPU, which is fairly impressive. 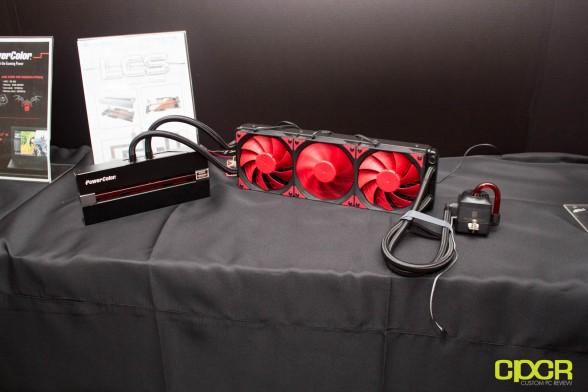 Taking a look at the design language, we can see that this is essentially a custom version of DEEPCOOl’s GamerStorm Captain 360 — which I actually use in my own test bench — featuring an identical pump and water block combo with red lighting and accents. It is worth noting that this is still in prototype phase, but as you can probably tell, it is pretty close to a finished product.

No word on when we can expect products featuring the new cooling solution to hit the market, but we’d  expect to hear more from PowerColor soon.