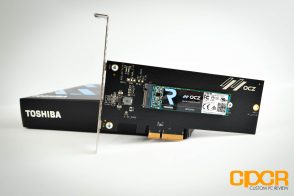 Before NVMe and PCIe SSDs became as well known as they are today, SSD manufacturers had to find creative ways to bypass the limitations of the SATA bus for customers looking for more performance than was possible on SATA. Among the companies spearheading the PCIe SSD market was OCZ with their RevoDrive PCIe line of SSDs. While they were able to provide performance far exceeding what’s possible via the SATA interface, the first RevoDrive SSDs which were Frankensteined creations built with multiple SandForce controllers and custom OCZ virtualization chips that made everything extremely expensive and very cumbersome.

Since then, we’ve come quite a ways away thanks to industrywide adoption of PCIe and NVMe, finally paving the way for mass market adoption of PCIe SSDs. Although during the course of the journey OCZ has gone through a bankruptcy and a subsequent acquisition by Toshiba, they’re still continuing to innovate in the PCIe arena – albeit now with a new name and tons more resources, recently introducing the Toshiba OCZ RD400 PCIe SSD, which they hope will help restore the OCZ name to its former glory. 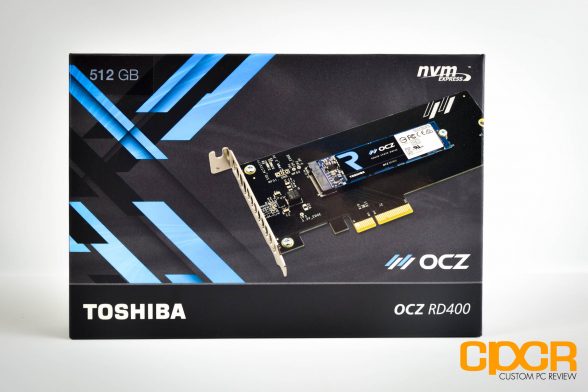 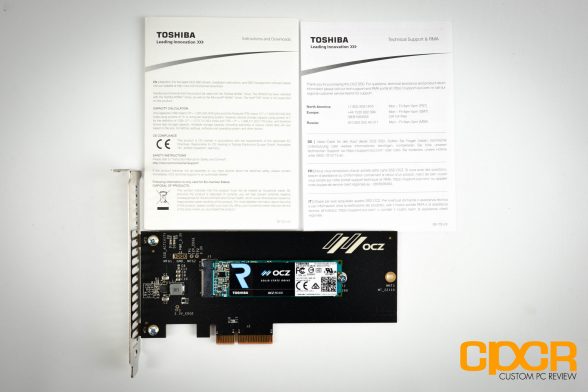 Included in the packaging is a couple pieces of documentation and the drive itself. 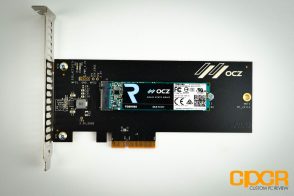 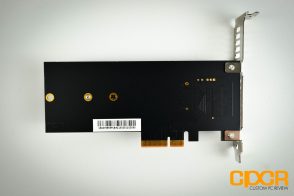 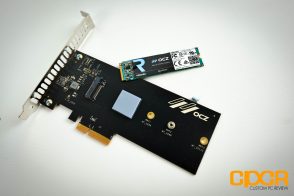 OCZ sent us the RD400 with the PCIe adapter, but the bare drive can be purchased on its own. The adapter is a fairly basic adapter without too many bells and whistles. Removing the OCZ RD400 from the adapter is achieved simply by removing a screw. Removing the OCZ RD400 doesn’t appear to void the warranty, so those who purchase a drive with an adapter now can opt to use just the bare drive later. 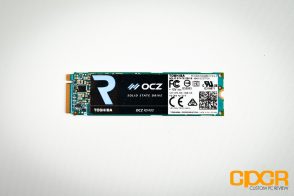 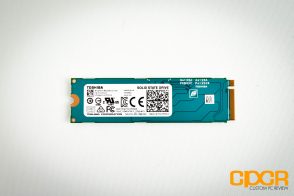 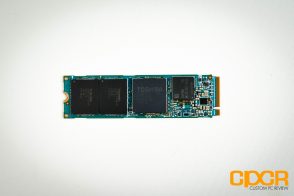 The Toshiba OCZ RD400 is sold in the common M.2 2280 form factor. Our 512GB version of the drive had two NAND packages, a controller, and DRAM package onboard. 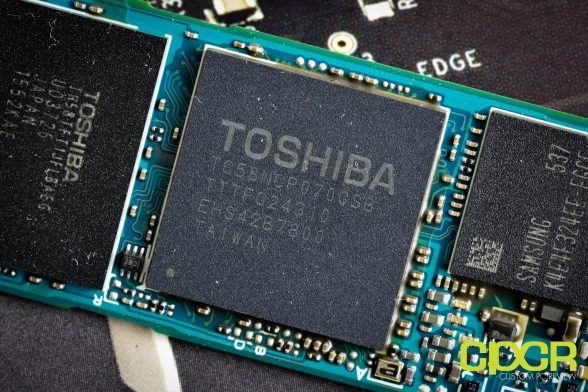 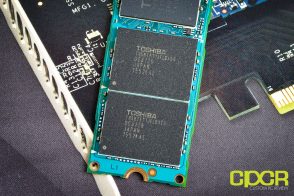 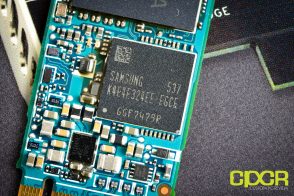 NAND onboard is Toshiba’s 128Gb 15nm MLC NAND which is fairly popular among SSDs today. This is actually the first time I’ve tested a drive using Toshiba’s 16-stack NAND packaging technology which was presented back at FMS 2015. 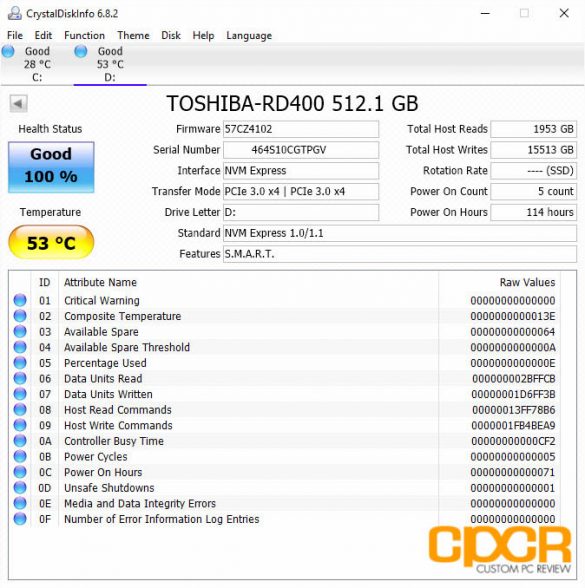 Booting off the OCZ RD400 wasn’t an issue in both Windows and Linux as NVMe drivers are already built into newer operating systems. It is important however that users looking to purchase the Toshiba OCZ RD400 to use as a boot drive will need Windows 8.1+ or the Linux with the Linux Kernels 3.3 or later, and a motherboard that supports booting via UEFI. 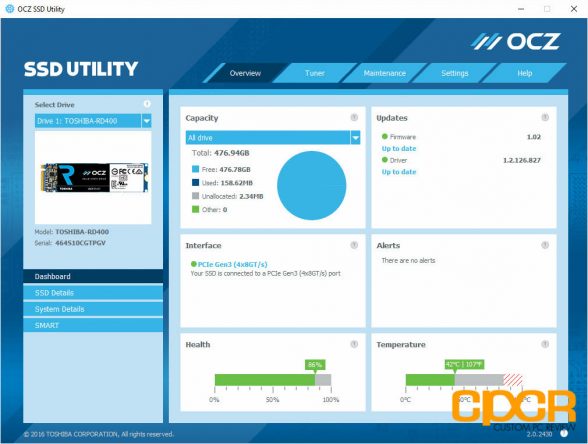 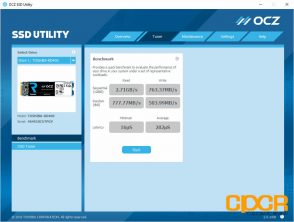 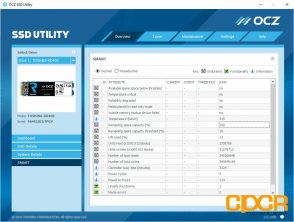 Following the footsteps of Intel, Samsung and SanDisk, OCZ also unveiled their own SSD utility back with the launch of the OCZ Vector 180. The OCZ SSD Utility allows users to perform a variety of tasks including checking drive monitoring, performance tuning, drive maintenance, and more.

Kicking off strong, the Toshiba OCZ RD400 performs very well in ATTO Disk Benchmark, with performance up to 2,700MB/s sequential reads and 1,648MB/s sequential writes. It always great to see when a drive is able to beat its rated specifications.

AS SSD is a very commonly used benchmark used to measure SSD performance in sequential, 4K, 4K QD64 and latency. Tests are run using 100% incompressible data. AS SSD also outputs a final score at the conclusion of the test based off the overall performance of the drive.

Additionally, we also run AS SSD’s included compression benchmark which tests the drive using data of varying compressibility. Some SSDs such as SandForce based SSDs tend to perform significantly better when the data is compressible. 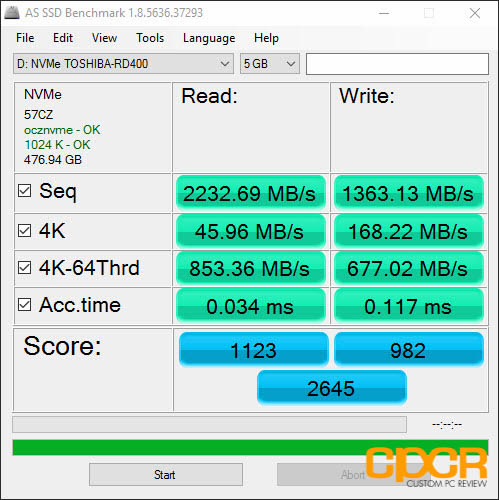 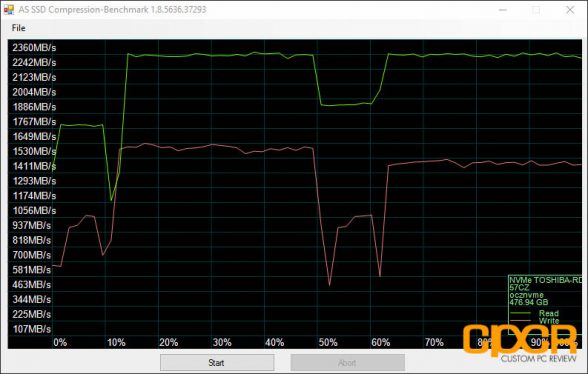 Again, fantastic performance in both these benchmarks, so no complaints here. So far, OCZ’s new drive is shaping up to be one of the fastest drives we’ve ever tested. 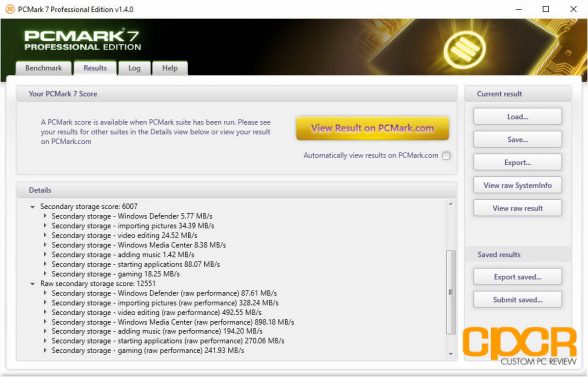 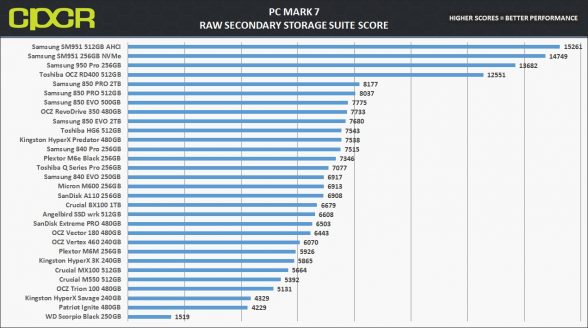 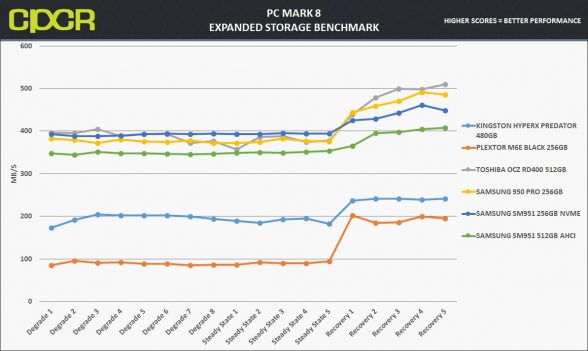 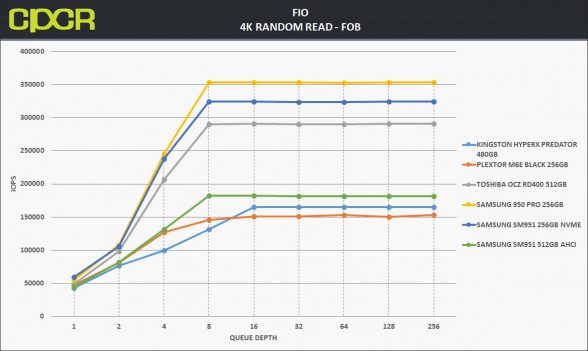 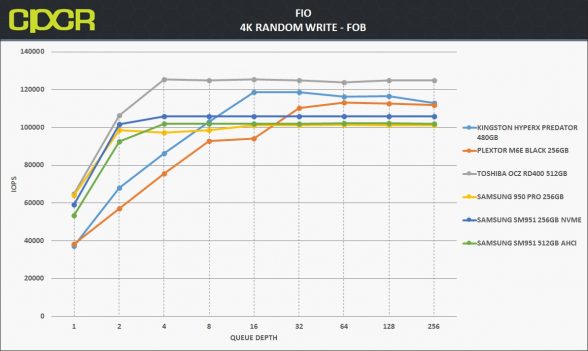 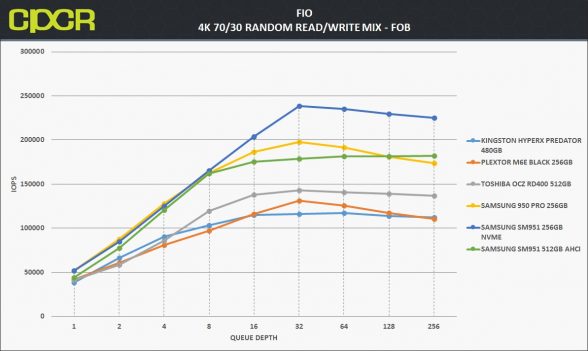 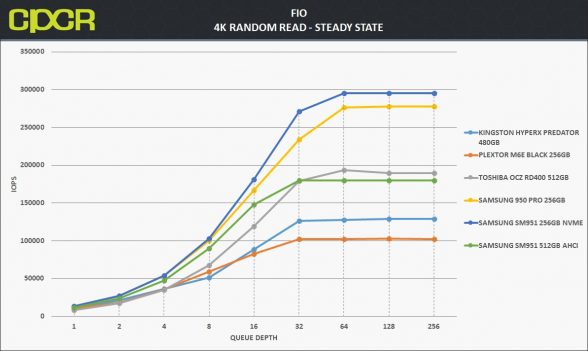 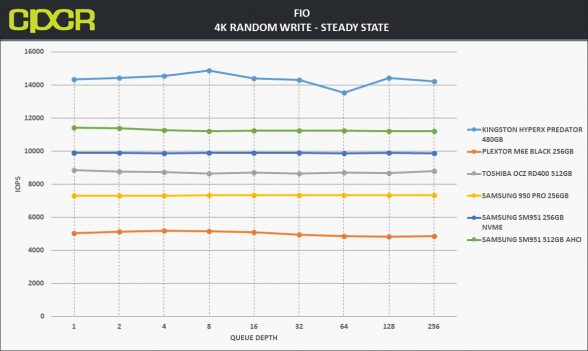 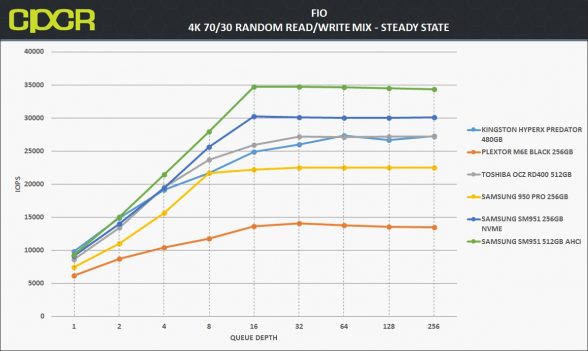 Write consistency on the Toshiba OCZ RD400 is relatively good, but there’s definitely some room for improvement, especially when compared to super consistent Samsung 950 Pro we reviewed recently.

Similar to 4K write consistency, latency could be more consistent as well. That said, latency is kept under 10ms throughout our entire testing, which is very good for a consumer SSD.

Testing methodology is very similar to our testing for 4K random write consistency. We use a fairly standard method, which includes both filling up 75% of capacity as well as 100% capacity twice with sequential 128k data followed by the actual test itself, which is running 128K random writes at a queue depth of 32. By recording the IOPS every second for 2,000 seconds, we’re able to get a good look at what kind of performance can be expected when the drive is relatively new, when it’s heading towards steady state, and when it’s actually in steady state.

Like what we saw with 4K writes, 128K writes were fairly consistent although there’s definitely room for improvement. It’s still among the best we’ve seen in the consumer SSD market. 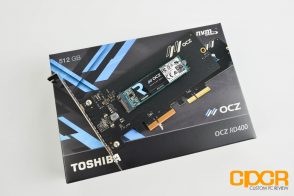 It’s been a while since OCZ really launched a top of the line, high-performance drive that I’d really purchase. While some of the older Vector drives were relatively good in their time, they were outmatched in cost and performance by competing Samsung drives. This is no longer the case today.

The Toshiba OCZ RD400 512GB can be found online for ~$309.99 for the bare drive and ~$329.99 for the drive with the PCIe adapter. This is relatively average pricing for PCIe M.2 drives, so nothing too special here. Until M.2 reaches the mass market adoption we see in SATA drives today, it’s expected to see products sitting at a premium. That said, the Toshiba OCZ RD400 is currently the best option for those looking for a 1TB NVMe M.2 SSD. Samsung’s 950 Pro currently top out at 512GB and although a 1TB drive is supposed to be coming, no hard date has been announced.

Overall the Toshiba OCZ RD400 512GB is an excellent drive with great performance, great pricing, a great warranty program, and now it’s even backed by the Toshiba name. For those looking at picking up a new NVMe M.2 drive, it’s definitely a toss up between the Samsung 950 Pro and the Toshiba OCZ RD400 dependent on price and availability. Highly recommended!