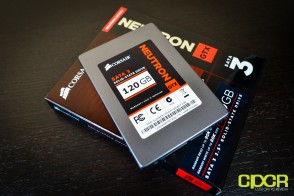 Not that long ago, when you went out to purchase a new SSD, there were quite a number of choices on the market in terms of brands, but the core components in terms of NAND flash memory and controller were generally the same. On the controller end, we generally had SandForce and Marvell being pretty much the only major players, and on the NAND side, we generally see some offering from IMFT or Toshiba/SanDisk. There’s very little variation here, and especially with many companies opting to use vanilla firmware on the controllers, there really isn’t much of a difference going with one SSD manufacturer over another.

This then brings us to our review for today, the Corsair Neutron GTX 120GB SSD. For those who haven’t kept up to date with new SSDs lately, Corsair recently unveiled two brand new SSDs using an exclusive SSD controller from Link_A_Media Devices (LAMD). These SSDs would fall under the Neutron and Neutron GTX line and while both SSDs use the exclusive LAMD LM87800 controller, the Neutron series SSD would be using Synchronous NAND while the Neutron GTX would be using slightly faster Toggle Mode NAND.

A Closer Look at the Corsair Neutron GTX 120GB 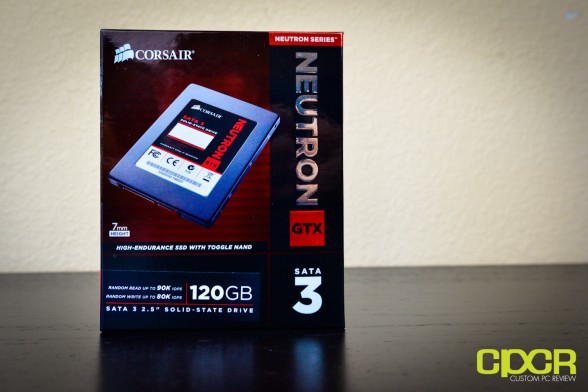 Here’s a look at the front of the box. 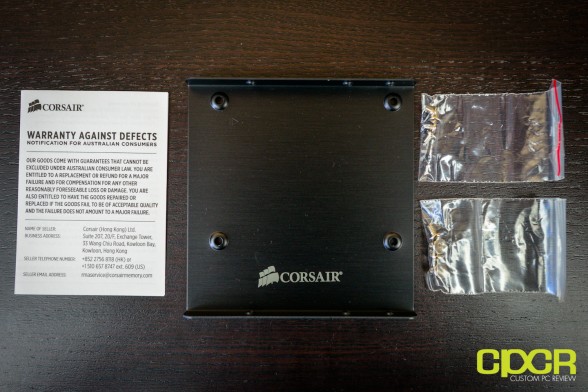 Included in the packaging, we get the usual assortment of Corsair accessories – warranty information, 3.5″ to 2.5″ adapter, and some mounting hardware. 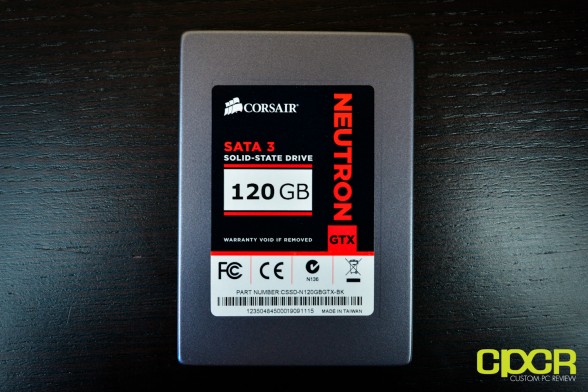 Here’s a first look at the Neutron GTX. Up front we get a sticker with all the information about the SSD. The entire SSD is constructed of a metal finish. 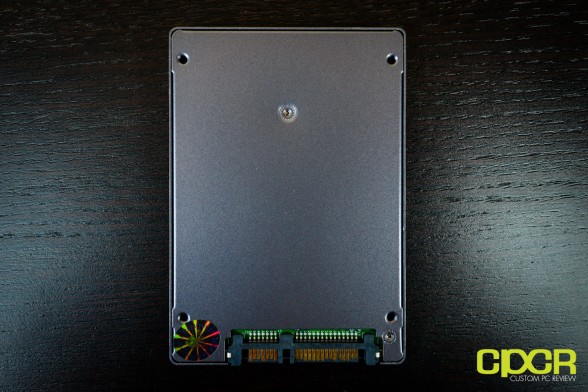 Here’s a look around the back of the Neutron GTX. 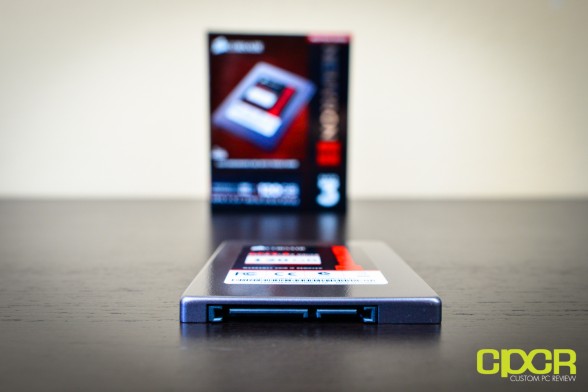 Here’s a look at the connectivity options on the Neutron GTX. We get a SATA power and SATA 3 6Gb/s connector. Very standard design. 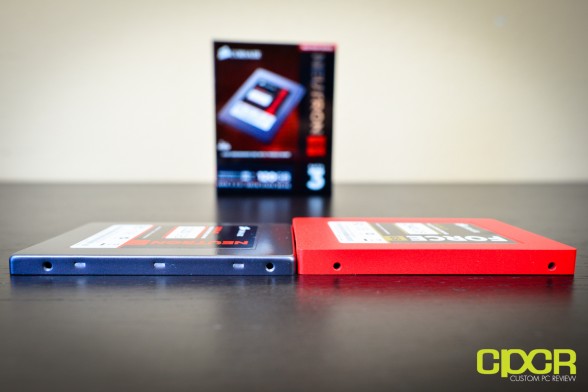 With the Neutron GTX, Corsair has opted to use a 7mm form factor rather than the usual 9mm form factor typically seen with most SSDs such as the Corsair Force GS shown on the right. This allows the Neutron GTX to be used in thin and light notebooks (such as Ultrabooks, for example) that only have clearance for 7mm SSDs.

A Closer Look at the Corsair Neutron GTX 120GB 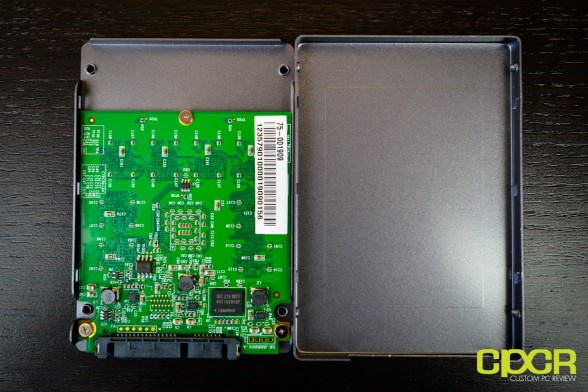 Opening up the Neutron GTX, we can see that the casing is held together via tabs rather than the typical screws. With the SSD open, we can see that Corsair chose to use a mini sized PCB rather than a full sized PCB. This is very similar to what we saw from the Corsair Force GS, and is more of a cost cutting measure than anything else. The backside of its PCB is also quite empty, which contributes to why the Newutron GTX is so thin. 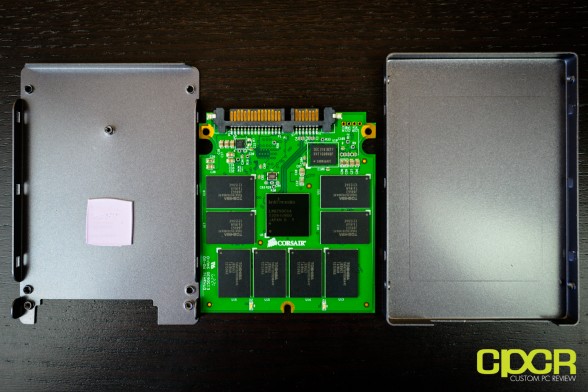 Moving to the other side of the PCB, we can see that there’s a lot going on here. We’ve got 8 NAND packages, a controller, and a DRAM chip. Let’s take a closer look. 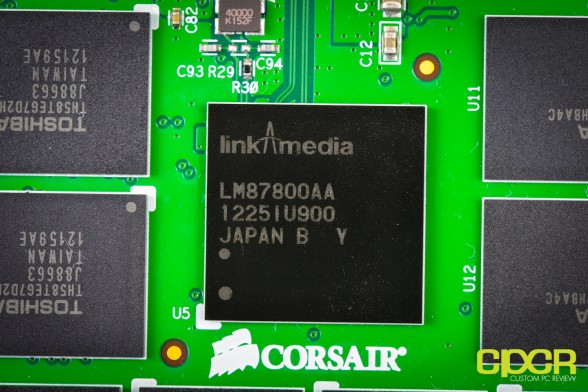 Here we’ve got the new Link_A_Media Devices LM87800 SSD controller, which is currently a Corsair exclusive controller. A quick search on LAMD tells us that they’ve been in the business of producing stuff like hard drive controllers and SSD controllers for about 8 years, but it seems like they’ve been doing so in mostly the enterprise space rather than the consumer space. Searching online for details on the new SSD controller on the other hand was quite difficult as the only piece of documentation that really talks about the LM87800 in any detail whatsoever is from a LAMD press release. That said, there are a couple pieces of important information that we can take away from the press release. 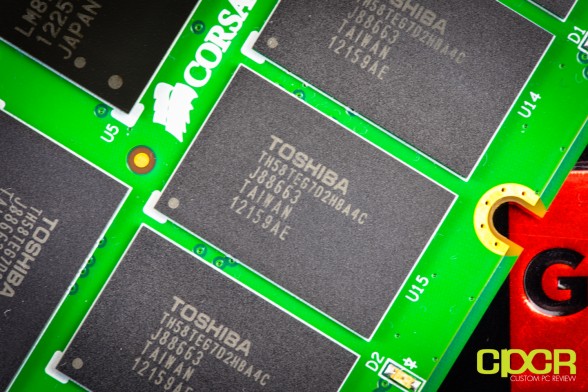 The NAND used for the Neutron GTX is Toshiba/SanDisk 24nm Toggle Mode NAND. Nowadays, this is fairly common high performance NAND. With the Neutron GTX 120GB, Corsair has opted to use a total of 8 NAND packages, each containing 16GB each. As this ends up being 128GB, 8GB is used for overprovisioning, similar to what we see in SandForce based SSDs. 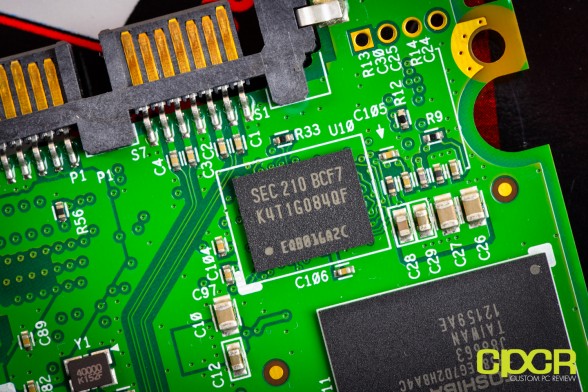 The Neutron GTX contains two 128MB DDR2-800 DRAM modules as well making it a total of 256MB of DDR2-800. The DRAM modules generally act as a buffer that caches incoming writes from the host, improving small file write performance. 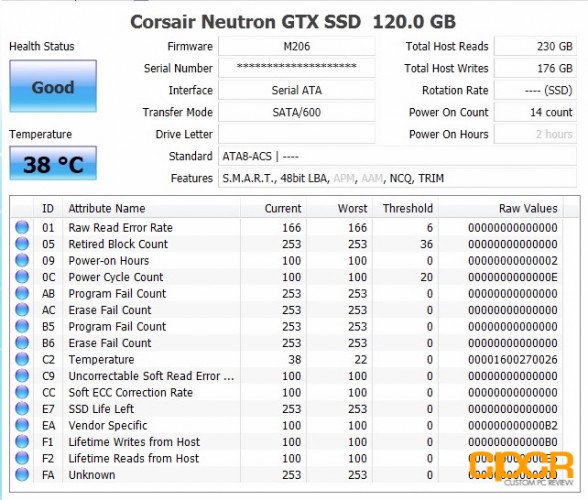 Starting off our testing with ATTO Disk Benchmark, overall results are pretty good for a 120GB class SSD with sequential reads topping out at around at slightly over the rated 555 MB/s and sequential writes topping out at around 323 MB/s, slightly under the rated 330 MB/s. It’s interesting to see that sequential reads at lower queue depths don’t ramp up as quickly as expected with the drive slowly reaching a maximum of 536 MB/s only after reaching the 8192 KB filesize.

Moving on into Crystal Disk Mark, I’m definitely quite impressed with what we’ve got here. Performance between compressible and incompressible data sets are identical which is ideal and 4K numbers are quite impressive especially with this being a 120GB/128GB class SSD. Most impressively, the 4K QD32 performance figures are very good, which is a clear indication of LAMD’s enterprise heritage. 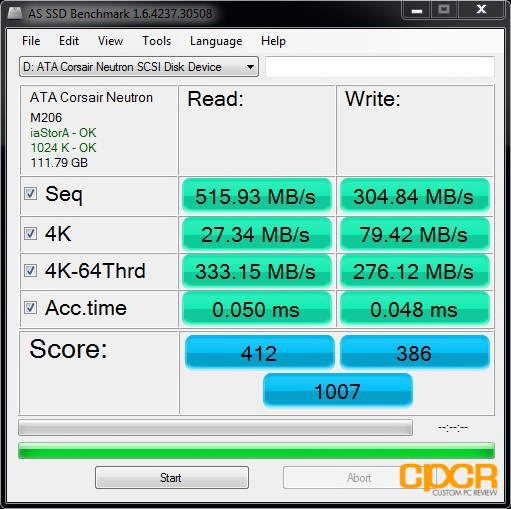 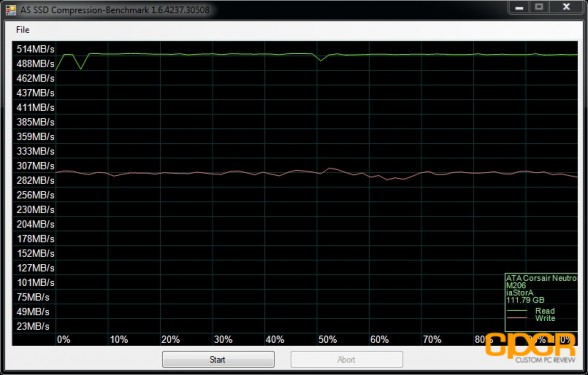 AS SSD’s performance figures mirror what we’ve seen with Crystal Disk Mark quite well, but what we’re most interested in of course is the compression benchmark here. As you can see, the line for both sequential reads and sequential writes are pretty flat, which is ideal as there will be no performance difference when working with compressible or incompressible data. 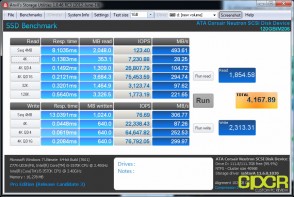 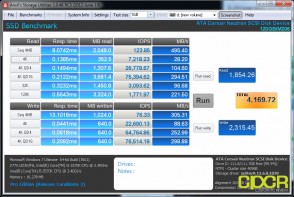 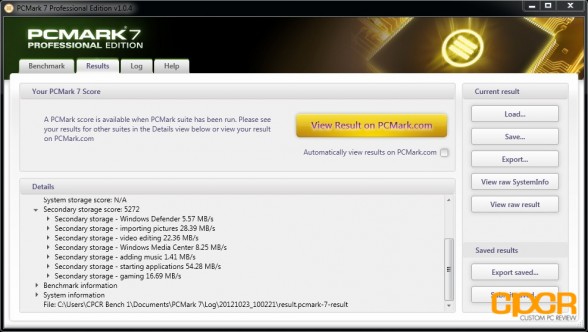 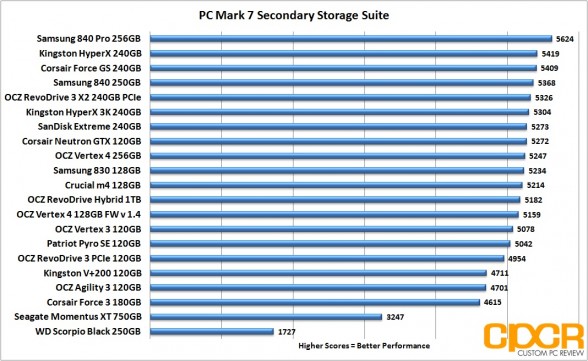 Taking a look at PC Mark 7, we can see that the Neutron GTX was able to score a whopping 5272 points, which is enough to hurl it to the top of the 120GB class SSDs, and actually puts it slightly above the 256GB class OCZ Vertex 4. This is no doubt due to the excellent 4K performance that can be expected from the Neutron GTX. 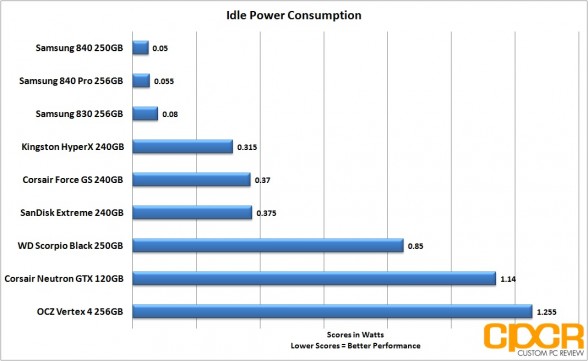 Although being advertised as low power consumption, the Neutron GTX with its LAMD controller isn’t actually all that low, drawing about 1.14W while doing absolutely nothing. 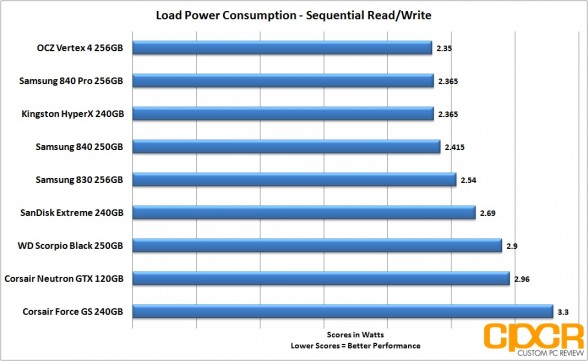 In constant sequential read/write operations, the Neutron GTX draws 2.96W here, which again is relatively high compared to the other SSDs tested today, but in absolute terms, we’re looking at less than a 1W difference between the Neutron GTX and the most power efficient SSD. 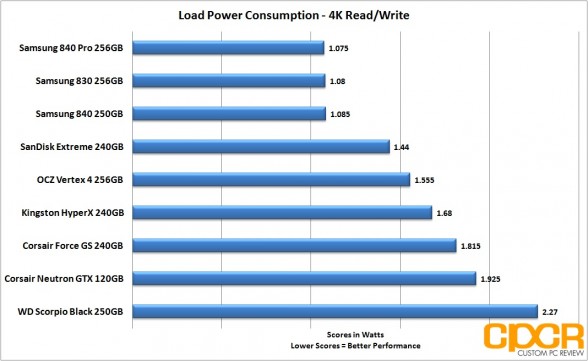 Moving on into constant 4K power draw, the Neutron GTX is the least power efficient SSD in the group, drawing 1.925W during load. Relatively speaking, it draws quite a bit of power, but again absolutely speaking it’s going to be less than 1W difference. 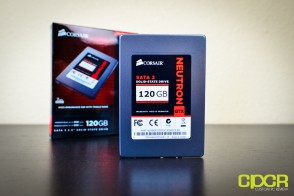 So let’s wrap it up. Normally we’ll start here with performance, but let’s first address the elephant in the room – the new LAMD LM87800 controller. Personally, I think it’s a very solid start for Corsair and LAMD. Despite slightly lower sequential read performance at lower queue depths and idle power consumption that’s a bit high, the controller is solid and shows no indication that this is a new controller with tons of bugs to be worked out. Of course, it’s hard to say with the limited amount of testing I can do here, but Corsair’s decision to throw in a 5 year warranty on every Neutron GTX certainly does seem like they’re quite confident in the reliability of their product.

Performance wise, the Neutron GTX 120GB is certainly very good. It topped our charts as the fastest 120GB/128GB class SSD we’ve tested to date and does seem to handle higher queue depths especially well, which is most likely a result of LAMD’s heritage as a enterprise product manufacturer. As I mentioned earlier, sequential reads do suffer a bit in low queue depths, which is most representative of typical client usage, but it shouldn’t be a huge deal in the real world since performance does eventually get to the 500+ MB/s range. Now do keep in mind that we normally review 240GB/256GB class SSDs, which typically will produce better performance as higher data density along with more NAND channels usually better performance.

Aesthetics and design wise, the Neutron GTX is a fairly good looking SSD. What’s special about the Neutron GTX is that it will come in the smaller 7mm form factor, which will offer some level of flexibility for those looking to outfit the SSD in a more thin and light notebook that can only accommodate smaller 7mm SSDs. That said, I’m not so sure it’s a great pick for those looking to outfit a notebook as power draw is a bit higher than I’d like to see.

Corsair and LAMD have produced an excellent first generation product here with top notch performance that normally takes multiple generations to accomplish. While pricing is a bit higher than I’d like and power consumption does need a bit of work, I think the Neutron GTX is a solid, top performing SSD for those looking make the upgrade this holiday season.

The Corsair Neutron GTX 120GB is currently available on Amazon.