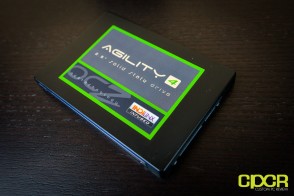 When we look at OCZ’s main SSD lineup, we generally think of two product lines – Vertex and Agility. It’s been that way for a couple generations of OCZ SSDs now with the Vertex line being engineered as the top of the line OCZ SATA based product and the Agility line being the budget option for those who aren’t necessarily interested in top of the line performance, but want to get into the SSD game.

With the 3rd generation Vertex and Agility series SSDs, the main difference between the two (other than price of course) was the NAND flash being used onboard. Whereas the Vertex 3 used faster, more expensive 25nm IMFT ONFi 2.x Synchronous NAND (up to 200 MB/s), the Agility 3 used older, less expensive, and consequently slower 25nm IMFT ONFi 1.0 Asynchronous NAND (up to 50 MB/s). Those interested in learning more about ONFi specifications, please visit the ONFi website here.

Of course since then, OCZ has unveiled the new Vertex 4, which is an excellent, high performing drive still based off of IMFT’s 25nm ONFi 2.x Synchronous NAND, but is now carrying OCZ’s in-house Indilinx Everest 2 controller (Marvell hardware, Indilinx firmware) rather than a SandForce based offering, which had been staple in both 2nd and 3rd generation Vertex and Agility series products. It’s only logical then since the Vertex series is receiving a controller update that the Agility series receive an update as well.

This then brings us to our review for today, the new OCZ Agility 4 256GB SSD. As expected, the new Agility 4 will be using OCZ’s in-house Indilinx Everest 2 controller, very much like the Vertex 4, but will be using 25nm IMFT Asynchronous NAND instead, very much like the Agility 3 SSD. With that said then, those interested in learning more about the Indilinx Everest 2 controller, be sure to check out our review of the Vertex 4 128GB and Vertex 4 256GB. Otherwise, let’s move on.

Taking a quick glance at the specifications here, it’s immediately apparent that because the Agility 4 no longer uses a SandForce based controller, maximum rated read and write performance in comparison to the Agility 3 will now take a huge dive of about 100 MB/s in both sequential read and sequential write performance. Now I wouldn’t be too alarmed with these specifications because SandForce controllers are only superior when dealing with compressible data, which is why it’s able to mask the slower Asynchronous NAND’s performance (or lack thereof). However, the Indilinx Everest 2 controller, unlike the SandForce SF-2281, does not discriminate between compressible and incompressible data, which consequently means lower rated performance.

A Closer Look at the OCZ Agility 4 256GB 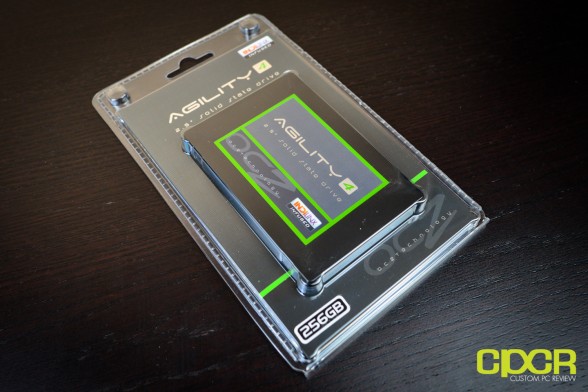 With the Agility 4, OCZ has gone with blister packaging rather than the usual retail box we’ve grown to know and love. Speculation says OCZ is trying to cut packaging costs here, but it’s anybody’s guess. 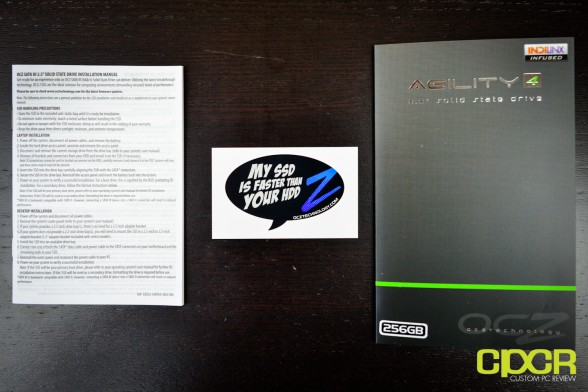 Included in the packaging is some documentation along with the usual OCZ sticker. Unfortunately, no mounting hardware or 2.5″ to 3.5″ adapters are included so make sure your case supports 2.5″ drives or you’ll have to get an adapter. 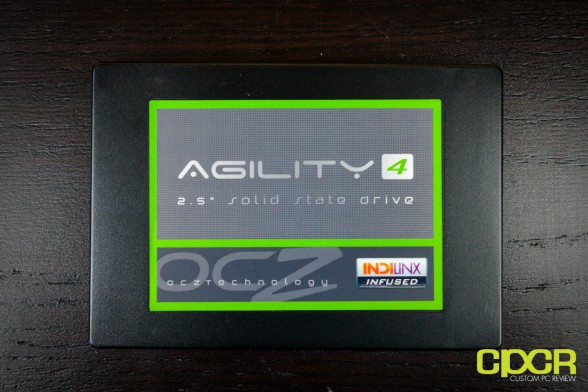 Here’s a look at the OCZ Agility 4. It’s a very similar design to the pretty much every OCZ product out there. We can see that it’s Indilinx Infused, which hints that we’ve got an Indilinx controller in there. 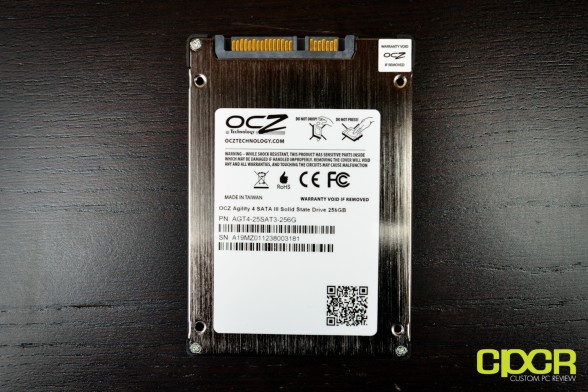 The rear contains all the extra information for those interested. 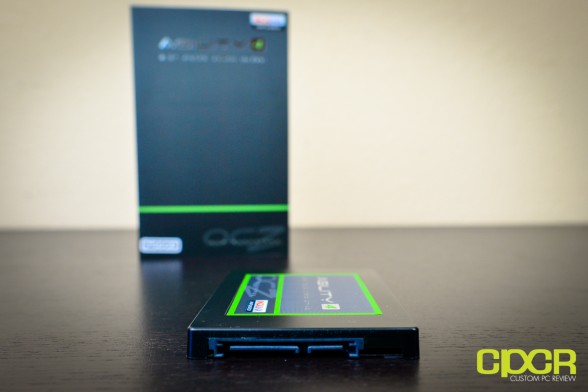 Here’s the SATA 3 6Gb/s connector along with the SATA power connector in its usual spot. Standard stuff. Additionally, the Agility 4 is a 9mm SSD, so it may not be compatible with ultra thin notebooks (Ultrabooks) that need 7mm drives.

A Closer Look at the OCZ Agility 4 256GB 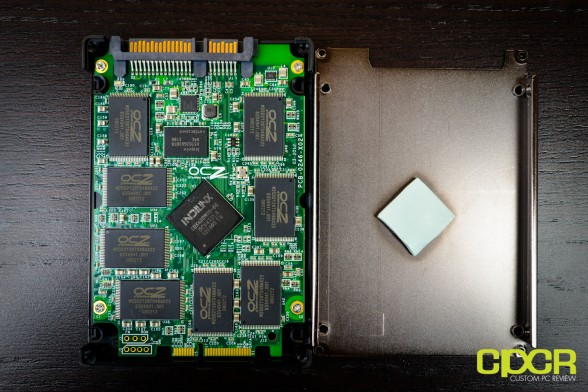 Opening the Agility 4 is quite simple as it’s held together via 4 Phillips screws. Immediately opening the drive, we notice that there’s the Indilinx Everest 2 controler, 8 packages of NAND, along with a DRAM chip. There’s also a thermal pad attached to the controller as well for better heat dissipatilon. 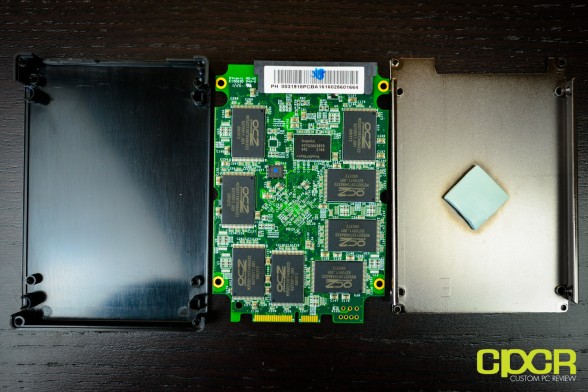 Removing another 4 screws allows us to remove the PCB entirely. The rear of the PCB includes another 8 NAND packages along with another DRAM chip. 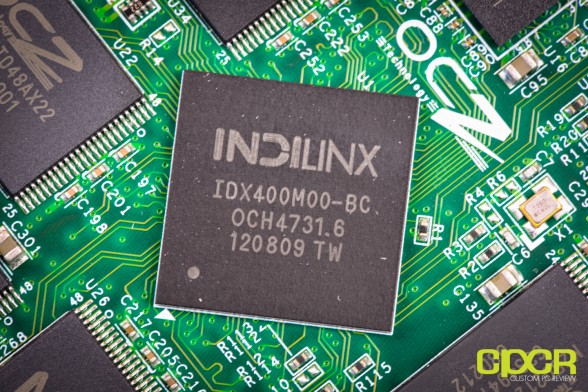 Identical to the Vertex 4, the Agility 4 contains the Indilinx Everest 2 controller, model # IDX400M00-BC. 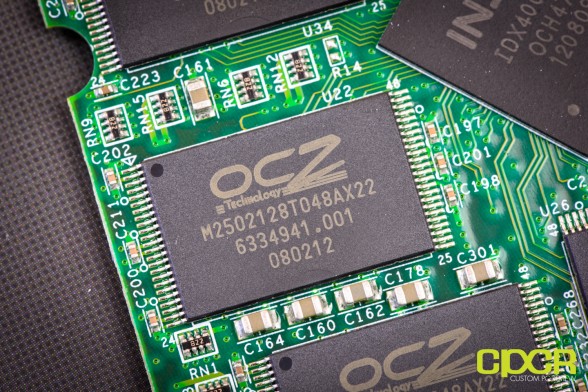 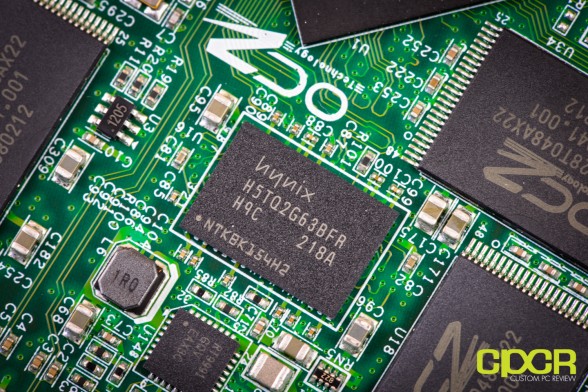 Finally, the Agility 4 also has two 128MB Hynix DDR3-1333MHz DRAM chips to make up for a total of 256MB worth of DRAM cache. The specific model number here is H5TQ2G63BFR signifying 128MB chips while the H9 speed grade marking signifies that it’s DDR3-1333 MHz. 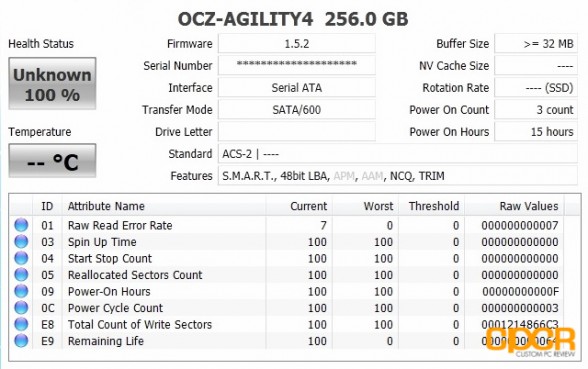 On the bright side, 4K figures across the board are still good, which is the most important when dealing with day to day use. 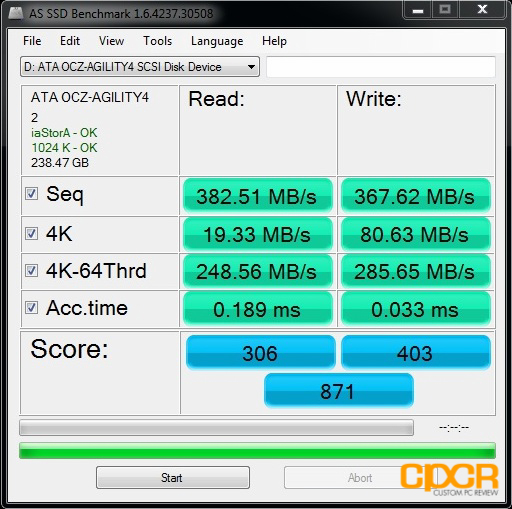 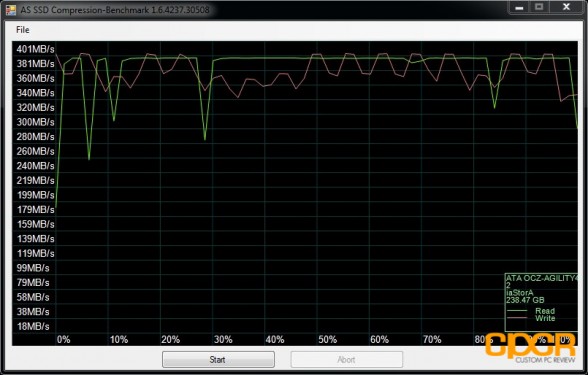 AS SSD results mirror Crystal Disk Mark quite well and in the compression benchmark, we see that the Indilinx Everest 2 controller has fairly stable performance no matter if the data is compressible or incompressible. Performance across compression levels in both read and write is a bit inconsistent in comparison to the Vertex 4, which is probably due to the asynchronous NAND bottleneck. 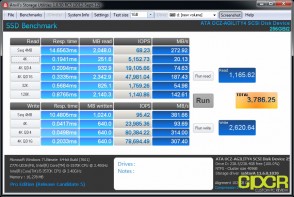 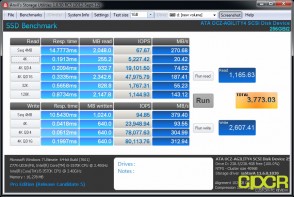 As expected, Anvil Storage Utilities doesn’t yield the best performance out there with the drive only scoring around 3,786 points. Like the Vertex 4, it’s quite apparent that the controller heavily favors write performance over read performance, which is strange given the fact that client workloads are much more heavy in reads than writes. I think if OCZ optimized the Agility 4 to favor reads over writes, it would be much more beneficial than what’s seen here. 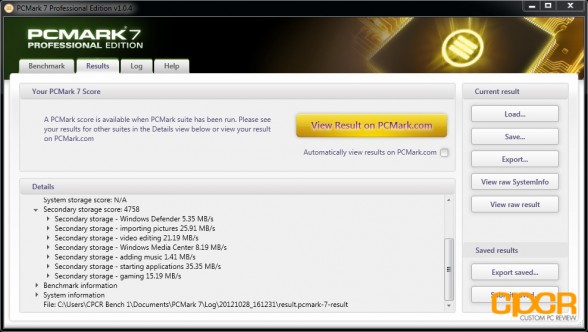 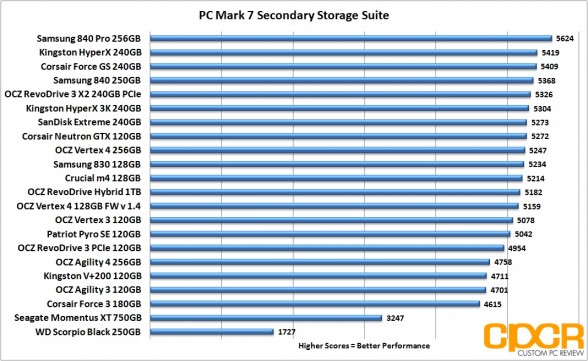 With PC Mark 7, the Agility 4 really isn’t all that impressive, dishing out a measly 4758 points. It’s currently the lowest scoring 240GB / 256GB class SSD we’ve tested to date, and it doesn’t score much higher than the 120GB class Agility 3. The combination of low, low queue depth performance in addition to low read performance definitely doesn’t help the Agility 4 at all. 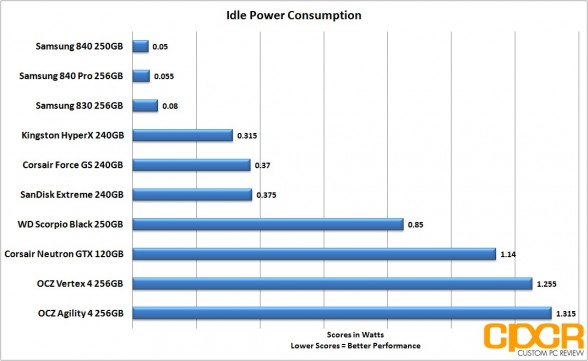 As expected, idle power consumption isn’t very good. OCZ has packed a ton of components onto the PCB and from previous experience, the Indilinx Everest 2 controller isn’t the most power efficient of the bunch either. 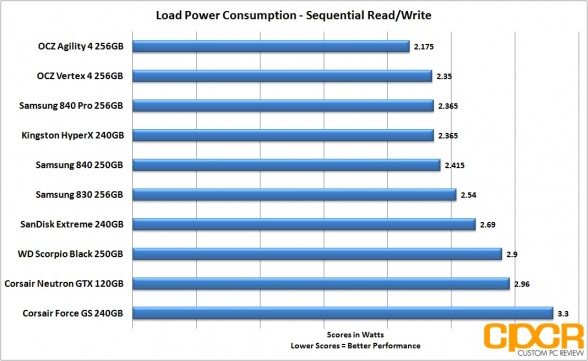 What is a bit strange is that during constant sequential read/write activity, the power consumption for the Agility 3 is relatively quite low in comparison to everything else on the market. 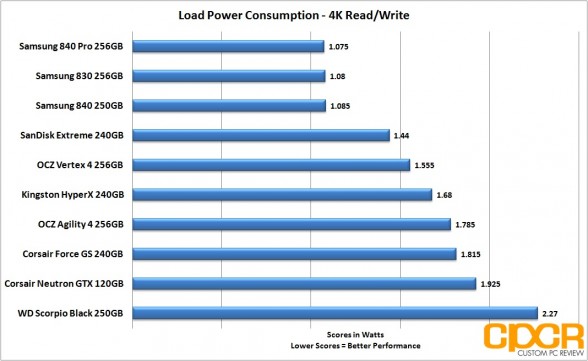 With constant 4K read/write activity, the Agility 4 is in the middle of the pack in terms of power consumption, drawing about 1.785w. 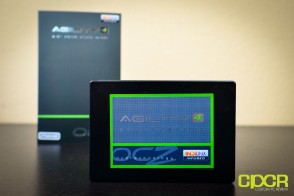 For mobile users, the power consumption on the Agility 4, like the Vertex 4 isn’t all that great either. This was somewhat expected since the Agility 4 uses the same Indilinx Everest 2 controller as the Vertex 4, and OCZ has decided to pack on a very dense 16 NAND packages onboard, each requiring some amount of power to run.

Since performance isn’t all that great, power consumption isn’t all that great, and OCZ is only throwing in a very standard 3 year warranty, pricing should be where OCZ makes the Agility 4 competitive, but I just don’t see that at the moment – at least with the more usual capacity drives such as the 128 GB or 256 GB drives. Taking a look at pricing for the much higher performance (and longer warranty to boot) OCZ Vertex 4, the 128 GB Vertex 4 is $104.99 and the 256 GB Vertex 4 is $199.99. In comparison to the 128GB Agility 4, it would only cost an additional $20 to upgrade to the 128 GB Vertex 4 while it would cost only ~$17 to upgrade from a 256 GB Agility 4 to a 256 GB Vertex 4.

The OCZ Agility 4 is your run of the mill budget oriented SSD. Those looking to upgrade from a mechanical hard drive will see massive performance benefits, but I still think there are better options out there for the price. If you can find an Agility 4 going for around $0.55/GB or lower this holiday season, I think it’ll be a steal, but anything over that and you’re better off going with something like a Vertex 4 instead.

The OCZ Agility 4 256GB SSD is currently available on Amazon.