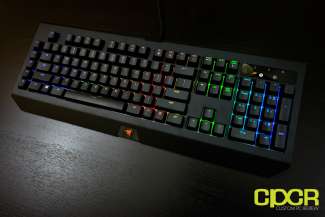 Back in 2014, Razer launched their BlackWidow Ultimate Chroma mechanical keyboard which was an instant hit at the time as little competition in the space along with the fact that the BlackWidow Chroma was actually a great mechanical keyboard helped propel it to being one of the most popular gaming keyboards in Razer’s lineup.

Since then, Razer has launched several other Chroma based products including the BlackWidow TE Chroma and BlackWidow X Chroma, leaving the popular BlackWidow Chroma without any updates for the past few years, until now.

As an update to one of Razer’s most popular mechanical keyboards, the recently launched BlackWidow Chroma V2 has received several important improvements for 2017 while still keeping all the great features of its outgoing predecessor. Does it succeed? Let’s take a closer look.

A Closer Look at the Razer BlackWidow Chroma V2 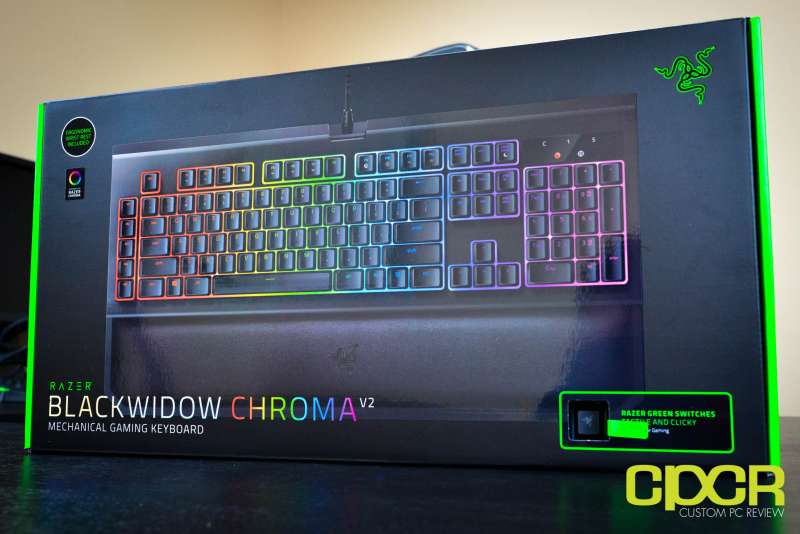 Here’s a look at the packaging for the Razer BlackWidow Chroma V2. 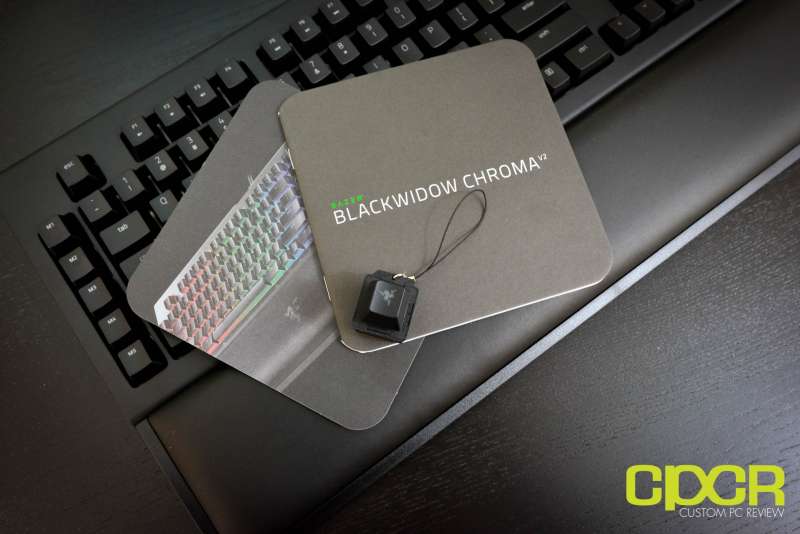 Included in the packaging is some documentation, a Razer keychain keyswitch tester, the Razer BlackWidow Chroma V2, and a magnetic wrist-rest. 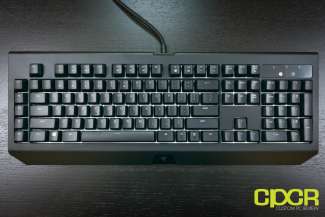 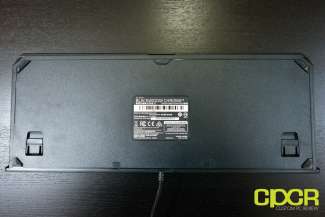 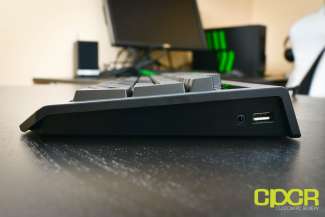 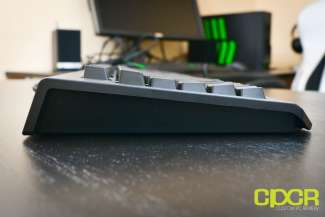 The Razer BlackWidow Chroma features the standard full size US layout for its main set of keys with a row of dedicated macro keys running alongside the left of the keyboard. Razer also has several F-keys which double up for other functions such as volume, media, sleep, illumination, enabling/disabling game mode, and macro recording. At the top right of the keyboard is also a newly designed status LED indicator panel.

Construction quality on the Razer BlackWidow Chroma v2 hasn’t changed much since the original and that’s not a bad thing. Razer utilizes quality plastics and a nice textured matte finish for the casing which gives the keyboard quite a bit of heft. As usual for a cased mechanical keyboard, the Razer BlackWidow Chroma V2 has a fairly thick profile. This allows Razer to add a USB and 3.5mm passthrough on the right side of the keyboard. 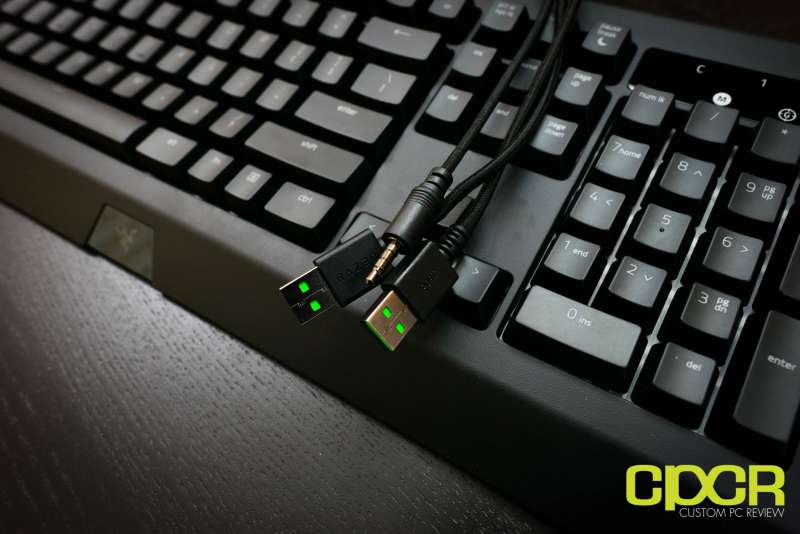 Despite the dedicated USB plug for the pass-through however, the pass-through itself is USB 2.0 only, so those planning to use high speed storage or other higher bandwidth USB devices will be capped at USB 2.0 speeds. Additionally, the 3.5mm audio pass-through is a single 3.5mm 4-pole connection which means those with older gaming headsets or a PC without the capability of outputting both audio and microphone on a single jack will likely need to purchase a 3.5mm splitter to use the functionality. 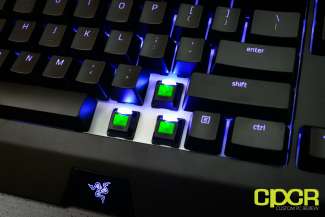 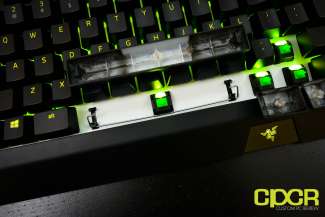 Removing the keycaps, we can take a look at the keyswitches underneath. The unit I received features the Razer Green switches which is a tactile and clicky switch similar to the Cherry MX Blues. Stabilizers on the Razer BlackWidow Chroma V2 is the costar style stabilizers which utilizes a small bar to ensure consistent actuation force across the entire length of the longer keys.

Keycaps on BlackWidow Chroma V2 is your standard ABS plastic with laser etching. For many keyboard enthusiasts, this may be the biggest complaint as these keycaps tend to wear out quicker than keycaps using more premium materials. That said, the switches do feature standard Cherry MX stems, so widely available 3rd party keycaps can be used for those who prefer PBT, double-shot or metal keycaps. 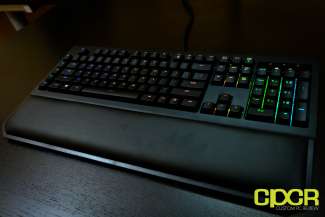 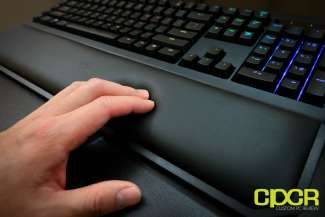 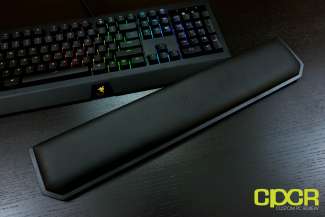 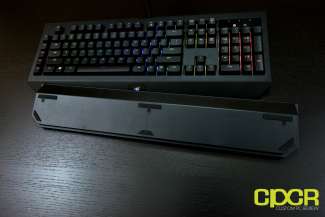 For the BlackWidow Chroma V2, Razer also added a nice magnetic wrist-rest which is something we saw previously on the Razer Ornata Chroma. The wrist-rest is very soft and comfortable, which helps reduce fatigue from typing on keyboard with such a thick profile. The magnetic design of the wrist-rest is also convenient for moving the wrist-rest out of the way when it’s not needed. 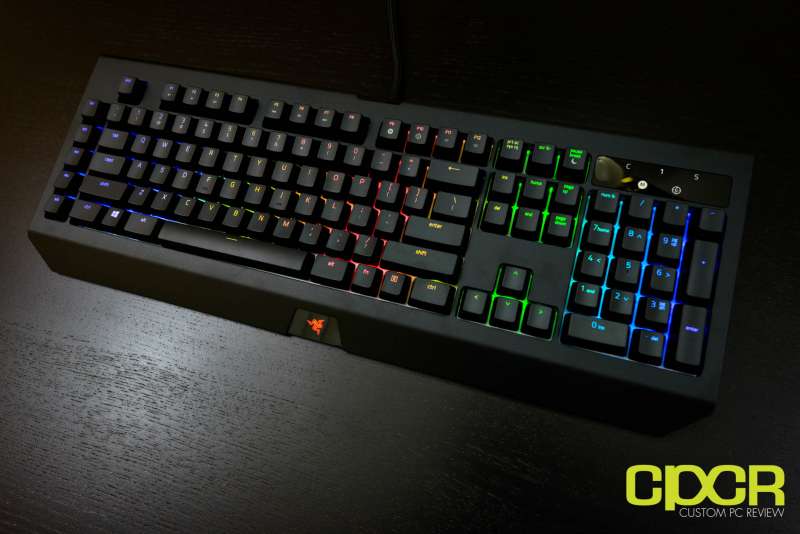 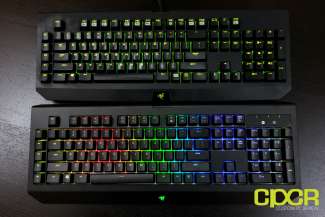 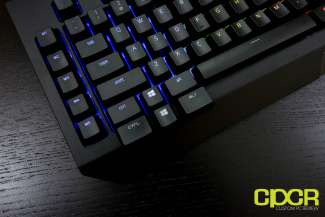 Aside from the change in the plastic casing for the keyboard, the other big change is that the font has been changed as well from the strange space style font to a more standard font. Another minor change is the top right corner of the keyboard which houses the status LEDs for Caps Lock, Num Lock, Scroll Lock, Game Mode, and Macro. There’s now a glossy cover over the LEDs which helps improve the look of the keyboard overall. 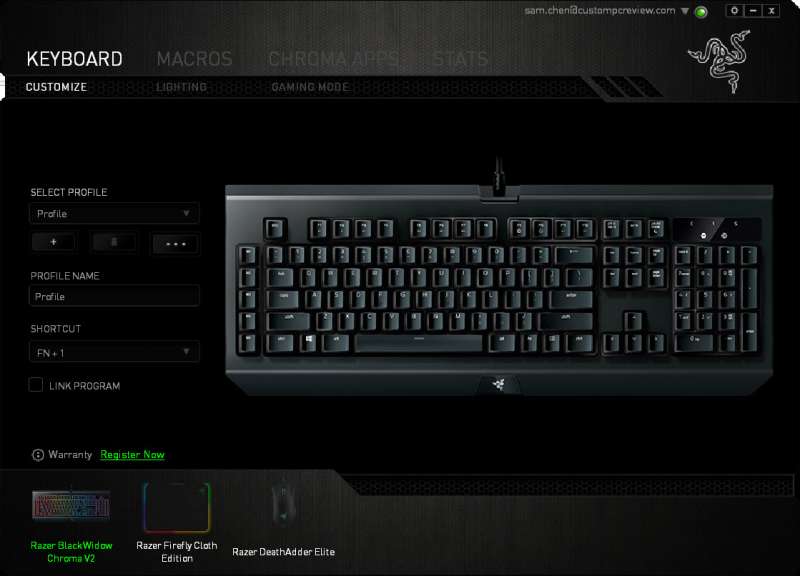 Software for the Razer BlackWidow Chroma V2 is Razer Synapse (surprise!). Synapse allows quick and easy control of all the features of the keyboard such as setting up macros, changing the LED lighting colors and effects, adding Chroma apps, and more. As we’ve covered Synapse as well as Chroma lighting previously in many of our reviews, go ahead and refer to those reviews for more in-depth information about the software and lighting capabilities. 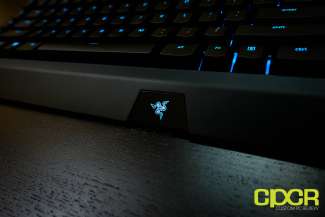 In gaming, the Razer Green switches are a pleasure to use. Although not as quick as a linear switch for those who need to spam keys a lot, the Razer Green switches feature a slightly lower actuation distance compared to the popular Cherry MX Blue making it faster, but it still retains the click and tactile bump from the Cherry MX Blue which I personally find to be better. Unlike linear switches, the tactile bump helps prevent accidental keypresses such as throwing a grenade onto yourself during high pressure in-game situations.

For testing typing speed, I utilized TyprX and completed the typing test several times to compare typing speed between the Razer BlackWidow Chroma V2 with the Razer Green switches against the Razer Deathstalker Chroma with membrane switches. As typing speed tests are highly subjective, your mileage may vary.

The Razer BlackWidow Chroma V2 with its Razer Green switches proved to be significantly better for typing performance with an average of 94WPM vs the Deathstalker Chroma with its membrane switches where I averaged approximately 69WPM. While typing performance is very subjective and typer dependent, an improvement in typing speed is generally the case when switching to mechanical keyboards.

In my testing, the Razer BlackWidow Chroma V2 was able to achieve 14KRO. This means that no more than 14 depresssed keys can be detected simultaneously. This however does require installation of the Razer Synapse software as it’s otherwise limited to just 6KRO. No ghosting was detected during any of my testing. 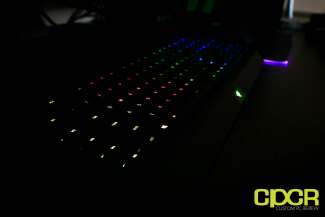 The original Razer BlackWidow Chroma is an excellent keyboard and continues to be one of my favorite mechanical keyboards since its launch several years ago. Aside from its great aesthetic design and build quality, the original BlackWidow Chroma checked all the boxes as it featured mechanical switches, Chroma RGB backlighting, dedicated macro keys, USB and audio pass-throughs, and more. The BlackWidow Chroma V2 essentially takes the original and refines it by adding a wrist rest, improving the font on the keycaps, improving the casing material, and adding a new Razer Yellow linear switch option  making it an even better value proposition than its predecessor.

Searching for areas of improvement proved difficult for the BlackWidow Chroma V2, but one thing I did notice is that the USB pass-through is USB 2.0 rather than USB 3.0 or better. While I understand Razer may have gone with the older USB standard due to the fact that typically the pass-through is used to connect low bandwidth gaming headsets and other peripherals, it would also be nice to be able to connect and achieve the full performance of USB 3.0 when connecting flash drives or external storage. Additionally, it would also be nice to see 3.5mm audio splitters included with the keyboard as many gamers still utilize older desktops and laptops which don’t have a combined 4-pole 3.5mm headphone/microphone jack. 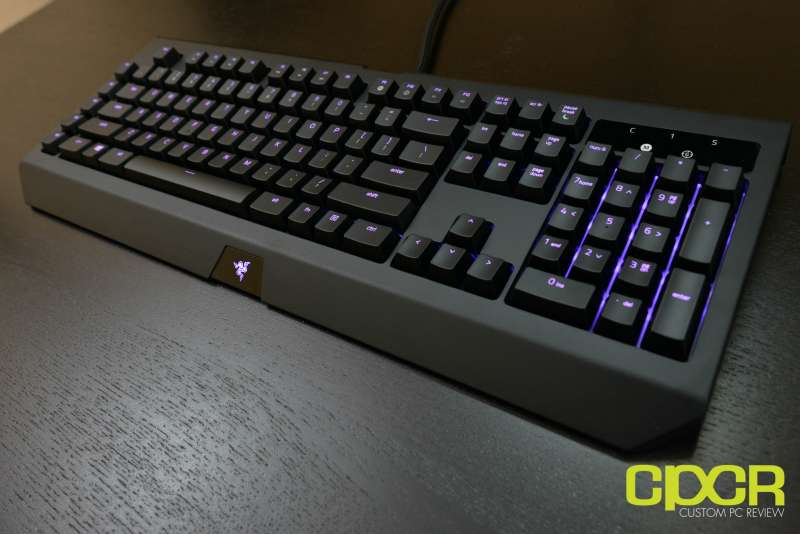