Perhaps the most striking feature about the Galaxy GTX560 GC is its dual removable fans on top of its wicked-looking customized heatsink. Designed to reduce flying dust clouds during cleaning (and quiet cooling performance, of course), these fans eliminate the need for compressed air – just take them out and wipe them clean with a non-static cloth.

So, how well does this card perform? Let’s find out! 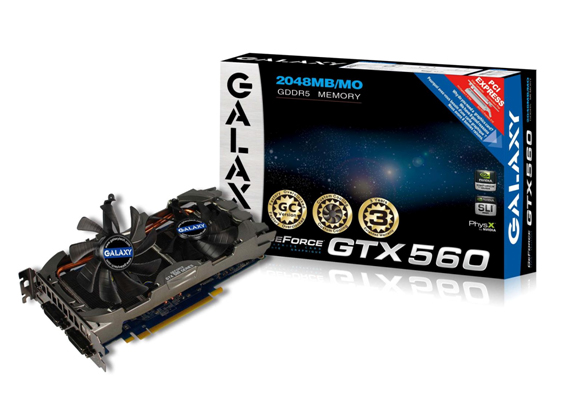 From the specifications, there are a couple things we should take note of.

Special thanks to HSPC for providing us with the HSPC High Speed Tech Station (large) for our testing setup. 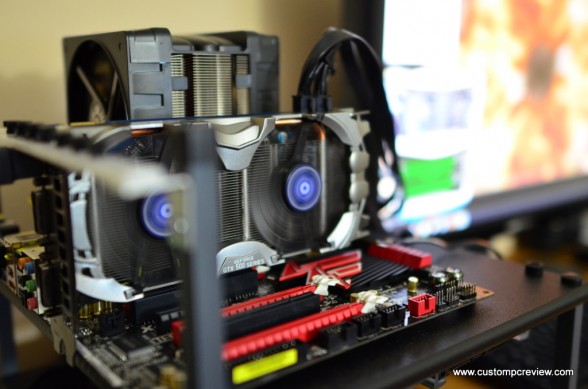 As seen from the numbers above, the factory overclocking doesn’t make a whole lot of difference making a 1-3 fps difference at most. Nevertheless, the card was able to run most of the benchmarks at playable 30fps or higher.

Overclocking the Galaxy GTX 560GC 2GB was a fairly effortless experience. With the stock voltage, we were able to crank this card up to 903MHz core / 1806MHz shader with little to no artifacting. After running a Furmark stress test with the heatsink fans blasting at 100%, the Galaxy GTX 560 GC 2GB peaked at 79°C which is well within safe temperature limits for a graphics card like this. The 903MHz overclock was able to yield us a 5.26% increase in performance in our Heaven benchmark.

With some additional voltage tuning and pushing the card even further, we eventually reached an operable clock speed of 982MHz/1964MHz at 1.087V. As you can see below, temperatures held steady at 87°C after our full 15 minute Furmark stress test. We were also able to achieve a 29.0fps in our Heaven benchmark which equates to a 9.02% performance increase. It should be noted however that at this clock speed there was noticeable artifacting. Despite a full 21.23% (172MHz) increase in clock speeds, the card’s cooler was still able to keep the GPU at acceptable temperatures. 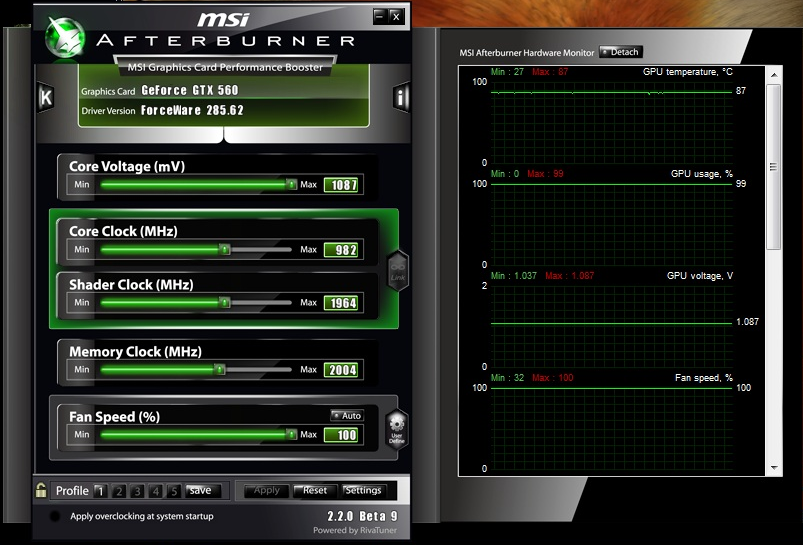 For those of you wondering why we didn’t use Galaxy’s own overclocking software, Xtreme Tuner HD, for this review’s overclocking portion, here’s a quick explanation. When we first made our attempts at overclocking this card, we downloaded Xtreme Tuner HD version 3010, which was the latest version on Galaxy’s website at the time. Unfortunately we had one big issue with the software – voltage controls were greyed out. This meant that the voltages could not be adjusted any higher than stock, so we resorted to using our tried and true MSI Afterburner overclocking software.

Well, after we published the review, Galaxy contacted us to see why we didn’t include the Xtreme Tuner HD software and after explaining the situation, they informed us that a new version of the software had been released – version 3016. Of course, naturally I went ahead, installed it and tested it out.

Check out what happened next: 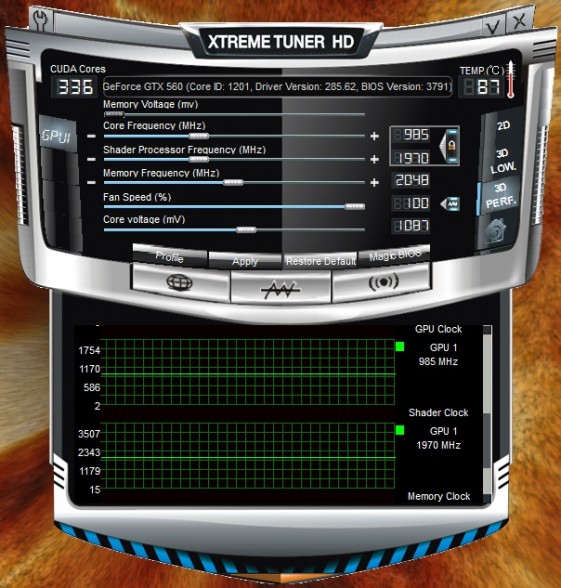 Long story short, pushed it up to 985MHz core / 1970MHz shaders @ 1.087v and ran a little over 15 minutes worth of Furmark to ensure stability. Sweet! Everything works now! Did I mention I was able to get to a higher clock speed today? 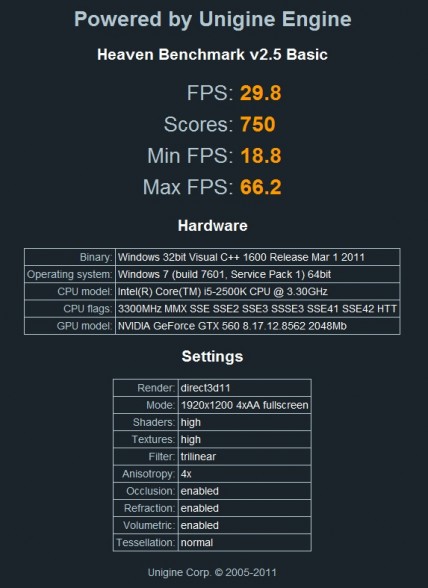 Of course, what’s a high overclock without some benchmarking to back it up right? So, I ran Heaven v2.5 again and… Nice. 29.8fps. If you missed it from the screenshot earlier, in this round I also pushed the memory clocks to 2048MHz from the stock 2004MHz whereas in my original overclocking I neglected to do so. Of course, when running at these clocks you do get quite a bit of artifacting, but Heaven does run all the way through.

If you’re interested, be sure to take a look at Xtreme Tuner HD version 3016 or higher. As you can see from the screenshot above, the software is pretty versatile allowing you to do some pretty cool stuff. For example, you can access the 2D section and lower the voltage being pumped to card to save electricity and allow your video card to run a bit cooler/quieter while idle. Also, if you happen to have an iPhone, you can download the Galaxy Xtreme Tuner HD iPhone App allowing you to overclock from your phone. Neato!

The Galaxy GTX560 performed admirably in our benchmarks churning out playable frame rates in most games tested. It even managed ~26fps in the tessellation intensive Unigen Heaven benchmark despite this being a mid range video card.

While many other manufacturers also offer the exact GTX 560 GPU that Galaxy has offered today, the main differentiating factor for this card is its factory made aftermarket cooler. As evidenced from our tests, the custom heat sink design was not just for show. It did its job very well, keeping the card below 80°C under load even with the gpu overclocked to 903MHz with voltages remained untouched. With the voltages boosted to 1.087v, the videocard was able to achieve an overclock of 982MHz and the heatsink was still able to keep temperatures under 87°C.

Unfortunately, we didn’t have the equipment to gather empirical data on sound levels. However, with that in mind, subjectively speaking the cooler was also able to do its job very quietly during idle and sound levels were acceptable when running at 100%. We found that during typical gaming situations, the fans never spun up above 80%.

Additionally, the Galaxy GTX560 GC 2GB was able to demonstrate its strong performance with very little power. During our Furmark stress test, which draws far more power than typical gaming situations, our total system power usage peaked at only 341W, meaning that you should be able to comfortably run this card with a high quality 450W power supply. Maximum power consumption during overclocking at 1.087V was 364w.

This card is a mid range card designed for customers who have mid range monitors. This means a  typical resolution of 1920×1200 or less. Without a high quality monitor running at resolutions higher than 1920×1200 or a multi-monitor setup, the 2GB memory buffer will provide little to no performance benefit. Typical consumers such as ourselves don’t have 2560×1440 monitors or triple monitor setups. From a customer standpoint, it seems like the larger framebuffer was implemented solely for marketing purposes designed for customers who are under the impression that a 2GB framebuffer would improve performance.

Personally, I would rather see Galaxy put the cost of that added frame buffer to better pricing or value added features such as a lifetime warranty.

If you are looking for a new graphics card that can comfortably handle modern games at high to ultra settings, the Galaxy GTX560 GC 2GB Edition is one helluva good choice.

The Galaxy GTX 560 GC 2 GB is currently available at Amazon, Newegg, and TigerDirect.