Back in 2006 when Sony launched their highly anticipated next generation console, the PlayStation 3, Sony needed a good starting lineup of games – especially if they wanted to compete with the other successful next generation consoles such as the Xbox 360 and the Nintendo Wii. Among the high budget launch titles was Heavenly Sword from developer Ninja Theory. Was this launch title a good enough to justify spending the pricy $500 original PS3 price? For me, it was. In fact, Heavenly Sword was the first PS3 titles in my collection and it’s still one of my favorites as well.

The story focuses on prophecy of a warrior who wielded a “Heavenly Sword” and fought to save the world from King Bohan. To achieve the goal of world domination, King Bohan is convinced that he will need the Heavenly Sword, a powerful weapon which gives the wielder incredible power. As such, the game will follow the struggles of the main character, Nariko, who is entrusted to protect the Heavenly Sword.

Picking up the game, the first thing you’ll notice is that game play is very fast paced and gamers will have an easy time learning how to play the game. Everything from the large cinematic combos to the quick time events, gamers familiar with hack and slash games like God of War and Devil May Cry will feel right at home. The Heavenly Sword allows players to switch between three different stances to maximize the whupping that anything standing in its way would receive. There’s a ranged attack, a fast attack and a heavy attack. These different moves are used to dispatch a variety of enemies and can be tailored for a persons individual play style. As the player dispatches the minions of Bohan’s armies, a combo gage will begin to fill up. Once it is filled the player will be rewarded with a finisher. These super violent finishers were fun to watch specially those focused in inflicting much pain around the male crotch area.

Sixaxis implementation was also a big feature in the game, and it’s something Ninja Theory did a fantastic job with. To this day, I still think Heavenly Sword has the best implementation of this technology, which was quite fun. Seeing the possibilities with Sixaxis, it’s too bad most game studios these days have abandoned development with Sixaxis controls. In Heavenly Sword, the Sixaxis controls allowed the player to hold a button and guide anything that could be thrown. I had great fun killing a soldier, picking up the dead body and then guiding it straight into a mob of soldiers trying to rush you. Not convinced yet? Well it gets better! In certain parts of the game, the player was allowed to either mount a canon or shoot using a cross bow. These projectiles could be guided by Sixaxis controls and be made to defy the laws of gravity for some amazing results. Imagine the thrill I received after releasing my first arrow and seeing it fly around in slow motion as I guided it straight into the butt of a fleeing soldier. 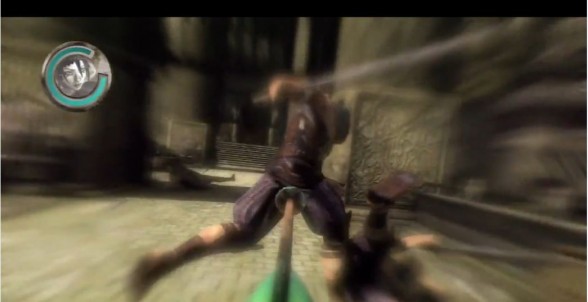 Complaints with this game are few and far between, but one of the most major complaints is that the game is rather short. Yeah, the game is great. In fact, it was so good that I was glued to the controller for six hours straight to find that I beat the entire thing in a single sitting. Royally sucks when you paid the original $60 for it, but with the game going for only $35 nowdays, I’d say it’s a must buy… or at least worth a rent.

Heavenly Sword was a Ps3 launch title that did the new system justice. This was the first time I ever saw hundreds of enemies rushing my character in HD and it seemed like a great start for the new system. The story was engaging and the gameplay was awesome. To this day, this title has integrated the use of the Sixaxis technology the best. For those who missed this game on launch day, it’s definitely worth a look.