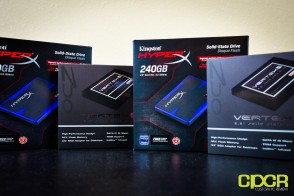 It’s no secret that SATA based SSDs these days are bottlenecked by the interface, and when it comes to attaining additional disk performance, you’ll either need to move to a PCIe based solution, a thunderbolt solution, or a RAID solution. However, PCIe based solutions are generally quite expensive and the lack of support for for thunderbolt based SSDs makes RAID seem like the best choice of the three.

For those unfamiliar with RAID and what RAID does, RAID stands for “Redundant Array of Independent Disks”. In simpler terms, RAID allows you to use multiple disks in order to achieve certain functionality with multiple disks. While most RAID setups involve some form of redundancy, what we’ll be testing here today is RAID 0 performance. In order to continue on about RAID 0, we’ll need to discuss what RAID 0 is first. While pages and pages may be written on RAID, the most basic way to think about RAID 0 is splitting the data onto two drives. Basically by giving each drive half the data, then we can theoretically expect twice the performance, right?

Now, before we begin the performance testing, there are a couple things which prompted me to write this article that I’d like to share with you. 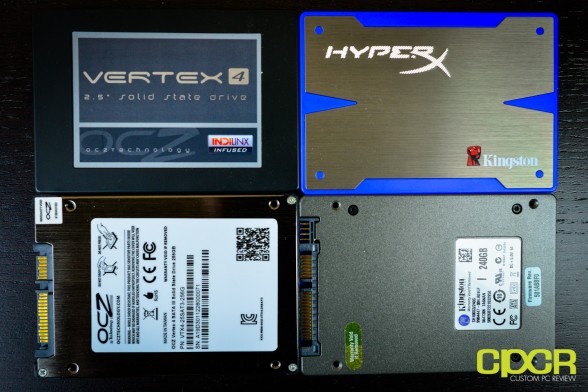 Today, we’ll be doing some RAID 0 performance testing on the OCZ Vertex 4 256GB and the Kingston HyperX 240GB. As this is more RAID 0 performance testing rather than a full fledged review (although titled as review), we’ll be jumping right into performance shortly. For more details on each of the SSDs being tested today (interior and exterior product shots, accessories, extraneous details, etc.), please be sure to visit each SSD’s respective full standalone review.

Starting off with our pair of Vertex 4 256GB SSDs, we can see  that pairing two drives in RAID 0 yields some pretty significant boosts in performance with sequential reads now topping out at around 960 MB/s and sequential writes peaking at 1.17 GB/s!

Looking at the ATTO Disk Benchmark scores for Kingston HyperX 240GB RAID 0 performance, we can see that the SSDs scaled very well here with the two drives in RAID 0 configuration pushing over a whopping 1GB/s in sequential read/writes in all queue depths tested today.

In comparison to a single Vertex 4 256GB in Crystal Disk Mark, we can see again significant improvement on sequential read/write speeds, 512K write speeds, but strangely a slight decrease in 4K write performance.

Shifting the focus to our pair of Kingston HyperX 240GB drives, the  pair once again scaled very well, outputting nearly double the performance in every metric when compared to the single Kingston HyperX 240GB. That said, it’s important to be aware that for the most part, the 4K read performance once again slightly dropped when moving from a single drive to a pair of drives in RAID 0. 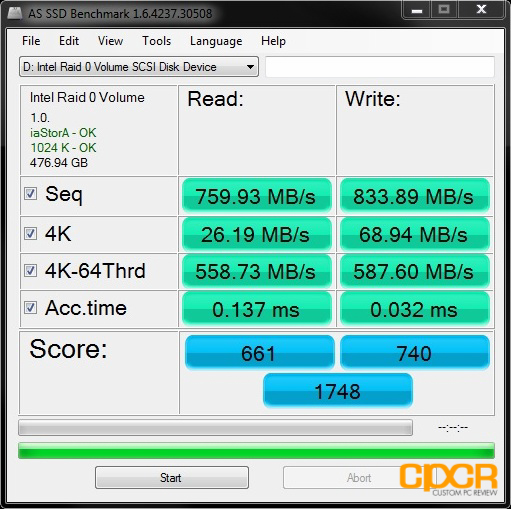 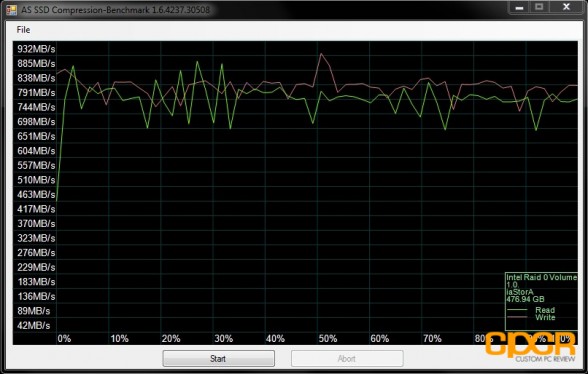 In our AS SSD compression benchmark, we can see that in comparison to a single Vertex 4 256GB, the performance curve for two drives in RAID 0 is much more unstable. That said, we still see the general straight line pattern suggesting performance will be fairly consistent no matter the compression on the data being read/written. 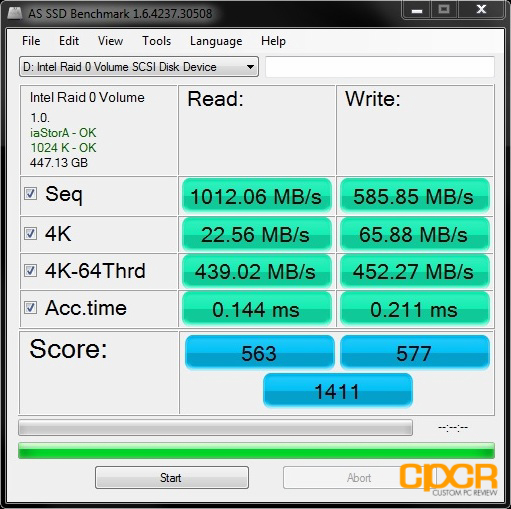 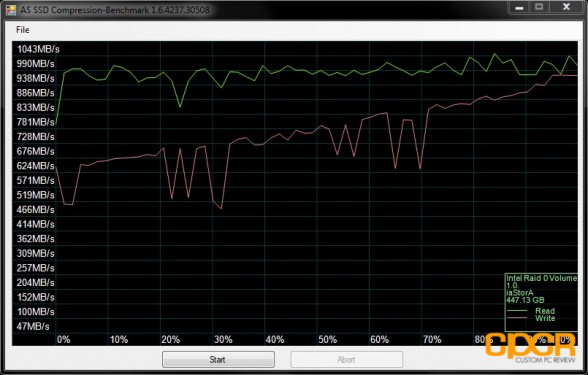 As expected from a pair of SandForce based drives, reads here are quite consistent over the entire range of compression while performance tends to suffer when data is very imcompressible. 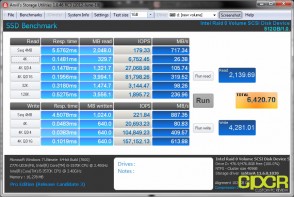 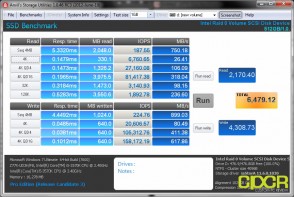 With Anvil Storage Utilities, we’re seeing larger queue depths and sequential file transfers being much faster with the two Vertex 4’s in RAID 0 than with a single drive by itself. There’s also significant decrease in latencies as well since having multiple drives is very similar to having multiple channels for data to pass through. Additionally, there’s also a huge point score increase in this benchmark as well from around the 4,500 range to the 6,400 range. 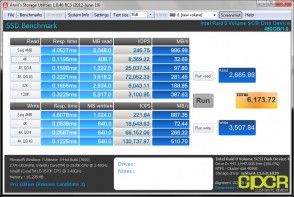 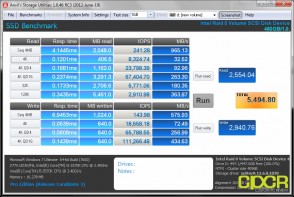 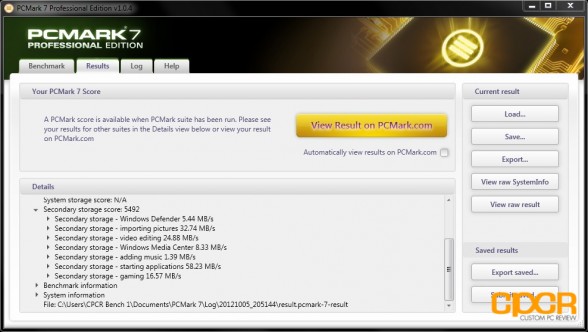 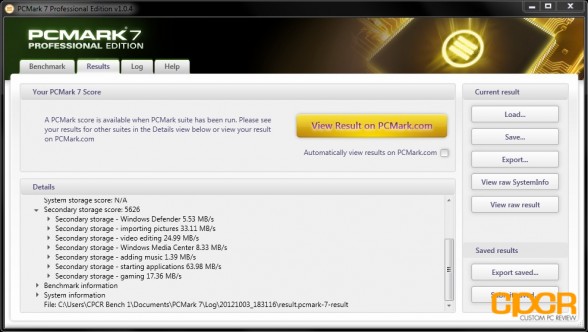 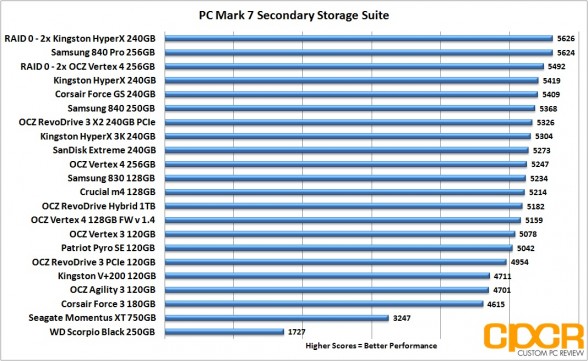 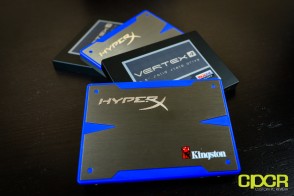 Since reviews for each SSD tested today is already available, this article is more simply about RAID 0 performance testing rather than a full fledged review, so I’ll only be sharing some general thoughts on SSD RAID 0 configurations along with a little bit about what we’ve seen here today.

First off, let’s talk about the Vertex 4 256GB. For those of you who regularly follow this website, you’ll know that back in July, I considered the Vertex 4 to be among the best SSDs of 2012. It had plenty of speed, it was priced very competitively, and OCZ gave it an industry leading 5 year warranty to boot. Excellent. That said then, nothing’s really changed when moving to two Vertex 4’s – the numbers speak for itself. We’re getting near 1 GB/s transfer rates in both sequential reads and writes, irregardless of data compression and significantly faster 512K read/write speeds as well. This is huge, especially for those who do a lot of photo or video editing and need to read and/or move large files around.

Like the Vertex 4, doubling up on the number of Kingston HyperX SSDs yielded similar performance doubling benefits. In ATTO Disk Benchmark, we were able to reach a whopping 1 GB/s in both sequential reads and writes, which is an astonishing feat in itself. In PC Mark 7, a pair of the HyperX SSDs were able to record the highest PC Mark 7 secondary storage score we’ve ever seen to date, which makes this a fantastic choice for those looking to push the limits of storage speeds. Additionally, let’s also not forget that a single 480GB HyperX is spec’d at slightly slower sequential read/write performance when compared to a single 240GB HyperX, which is simply just additional incentive to go for a pair of 240GB HyperX’s in RAID 0 rather than going with a single 480GB. 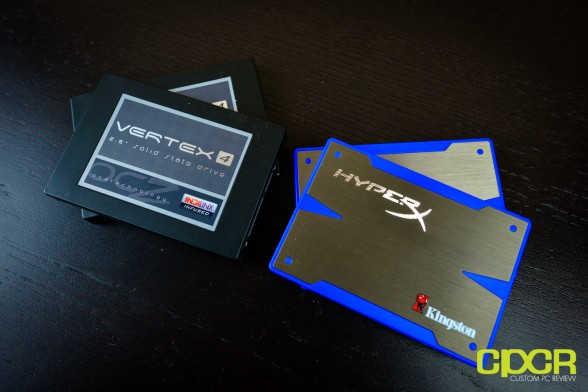 Generally speaking, the review of each single SSD applies to two SSDs in RAID 0 configuration as well. Both SSDs tested today are top tier products, and in RAID 0 configuration both SSDs are still top tier products. That said, I did find that the pair of Kingston HyperX SSDs fared slightly better in read performance while the Vertex 4 was able to perform significantly better in write performance. Because of this, those looking for a pair of SSDs to use for scenarios such as gaming where read performance is paramount, the Kingston HyperX may be a better pick. On the other hand, because of the Vertex 4’s superior write performance especially when dealing with incompressible data sets, those looking for a pair of SSDs to use when the primary purpose is transferring a lot of less compressible data such as photos, movies, etc., may find it a better idea to pick up a pair of Vertex 4’s instead.

Before we part, let’s also take a look at pricing as well since that’s going to be one of the biggest factors when deciding whether to pick up a pair of 240GB/256GB class SSDs, or a single 480GB/512GB class SSD. As you can see in the chart above, with the Vertex 4, it’s quite obvious that if the choice is between two 256GB SSDs or a single 512GB SSD, it’s slightly more economical to go with a pair of 256GB SSDs, while in the case of the HyperX, it’s slightly more economical to go with a single 480GB SSD over a pair of 240GB SSDs.

With Intel now supporting the TRIM command over RAID, it’s a very viable and possibly economically sound option to consider purchasing two 240GB/256GB class SSDs in place of single 480GB/512GB SSD. As we’ve seen today, by using two 240GB/256GB drives, we can effectively bypass the 6Gb/s theoretical transfer limit of SATA 3 and hit a full 1 GB/s sequential read/write, which previously restricted to only extremely costly options such as PCIe based SSDs.

Special thanks to OCZ Technology and Kingston Technology for making this review possible!