A Tale of Two Storage Technologies 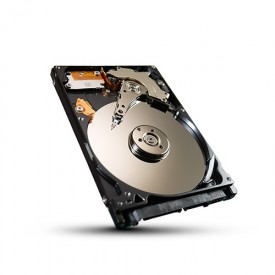 By now we all know that for the most part there are two major storage technologies out there – solid state drives (SSDs) and traditional hard drives (HDDs). Whereas solid state drives rely on NAND flash memory and a memory controller similar to how RAM in a computer works, traditional hard drives rely on spinning platters and a magnetic head that picks up data as the drive spins at thousands of rotations per minute.

SSD vs HDD: Pros and Cons

On one hand we’ve got the newcomer to the market, the SSD, and if you’ve been following up on your SSD reviews, you’ll know that they’re quiet, power efficient, shock proof, and fast. In fact, in most cases, they’re many, many times faster than the traditional hard drives. The downside? Well, they’re currently pretty limited in capacity, and at larger capacities, prices are quite exorbitant. Not to mention, up until the recent improvements in the memory controllers and NAND flash memory, SSD reliability was questionable at best.

On the other hand, we’ve got the traditional hard drive. Traditional because the core design of these drives really haven’t changed all that much since like 1954. Yeah, we’ve had minor improvements to the drive’s design, but the core design underlying this technology has been pretty much been the same. The upside? Well traditional hard drives have boatloads of capacity and they are relatively inexpensive. The downside? Well, they’re slow. Very slow. 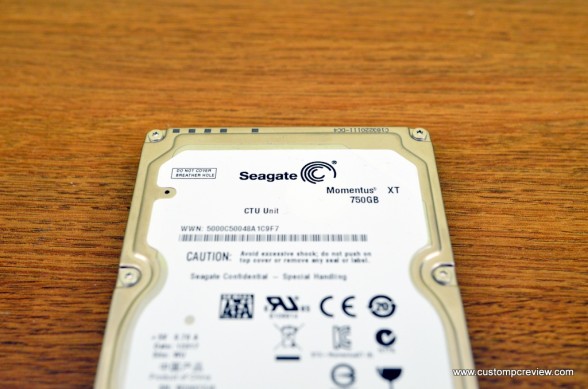 Luckily for us, Seagate Technology, one of the world’s largest hard drive manufacturers, has also noticed the apparent lack of a middle ground between the hard drive and the SSD, and they’ve introduced the Seagate Momentus XT Solid State Hybrid Drive, or SSHD. Now the idea of this hybrid drive is to combine both the hard drive and the solid state drive into a single hybrid drive, theoretically giving users the speed of a solid state drive with the capacity and price of a traditional hard drive. In order to achieve that, Seagate is using a technology they call FAST, or Flash Assisted Storage Technology, which is basically their method of combining a small amount of NAND flash memory into one of their hard drives to act as a cache thereby allowing users to attain the best of the both worlds – SSD and HDD.

A Closer Look at the Momentus XT 750GB 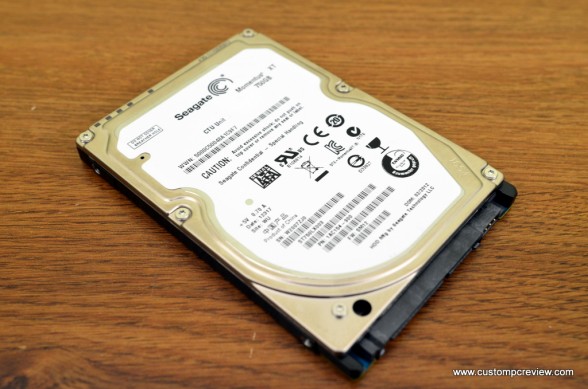 Since Seagate just sent the bare drive itself, I don’t have an unboxing for you, but here’s what the top of the drive looks like. From the top, there’s actually no way to even tell this thing has 8GB of SLC NAND in it. Up top you get the drive’s model, the Seagate Momentus XT and at the bottom you get information about the drive such as the firmware. For this drive, you can see that the firmware is revision SM12. 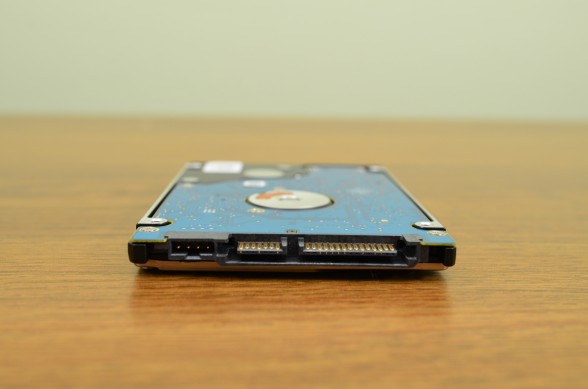 At the front of the drive, you get the SATA 3 6Gb/s connector along with the SATA power connector. Since the core of this drive is still a traditional hard drive, you aren’t going to benefit too much from using the SATA 3 6Gb/s interface. That being said, if you do happen to have a SATA 3 6Gb/s port available, you should definitely use it.

The bottom of the drive looks exactly like a traditional hard drive as well. You can clearly see the outline of the platters down here as well. Inside the drive you also get 8GB of SLC (Single Level Cell) NAND. The reason for this is because SLC NAND, unlike MLC (Multi Level Cell) NAND used in most consumer SSDs today is much more resilient to wear.

Since the caching feature of the Momentus XT is quite unique and requires the drive to “learn” the user’s usage patterns, I ran each benchmark on the Momentus XT three times prior to recording the third run only.

ATTO Disk Benchmark has lately become one of the industry’s most popular benchmarks for testing SSD read/write speeds, but also works very well with HDDs as well. This benchmark allows read and write testing using predefined block sizes and gives us a good idea of read/write speeds with different sized files. 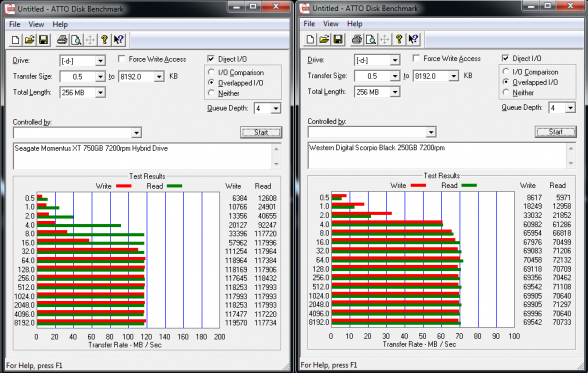 In the ATTO Disk Benchmark, we can see that the Seagate Momentus XT 750GB is much faster than the Western Digital Scorpio Black 250GB even as a hard drive itself. However, this test is a tad bit unfair as the Momentus XT is a 750GB drive, meaning the data is much more dense on the drive than the Scorpio Black, which is why it’s able to achieve much faster read/write speeds. Despite the Momentus XT having the 8GB SLC NAND, it doesn’t seem to benefit much here.

In Crystal Disk Mark, we again see that the Momentus XT is capable of much faster sequential reads/writes than the Scorpio Black, mostly attributed to the fact that it simply has denser platters. However, if you take a look at the 4k and 4k 32, it does seem like the Scorpio Black has the edge here, so in theory if both these drives are traditional hard drives, the Scorpio Black *should* perform a tad bit better when it comes to operations requiring random small file reads/writes (such as system booting or application launching).

As its name implies, HD Tune is a pretty standard benchmark for hard drive benchmarking. It gives us a good idea of both the drive’s transfer rates and the drive’s access times.

Again, we see that the Momentus XT does outperform the Scorpio Black, in sequential transfer rates, but otherwise the access times seem very similar. Underneath all the technology the Momentus XT is still, just a hard drive.

The PC Mark 7 storage test tests the storage drives under many different real world tests such as gaming, video editing, etc. This is most representative of the drive’s performance under real world situations. 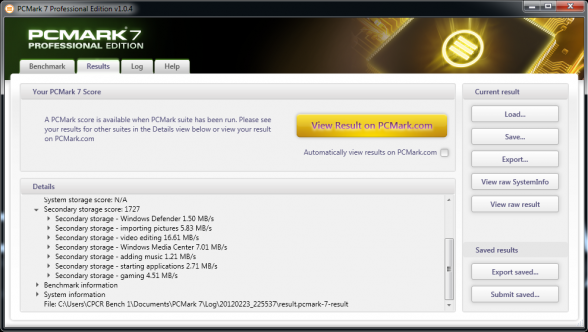 Here we see the PC Mark 7 run off the Scorpio Black. As we see here, the drive doesn’t perform very well at all, coming in at only 1727 points. The “starting applications” performance is abysmally slow, coming in at only 2.71MB/s. Safe to say, if what you’re using is coming in at this speed or  slower, it’s time to make that upgrade. 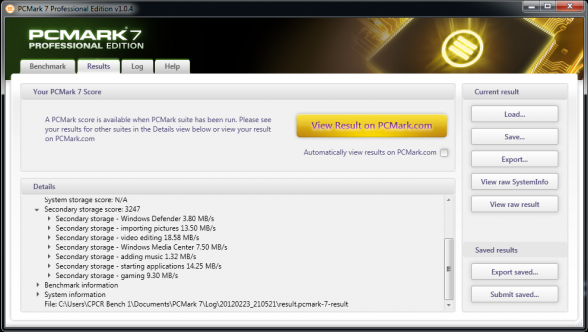 Finally, comparing the Momentus XT’s score to some of the scores for SSDs we’ve tested previously, the Momentus XT is able to come in between the Scorpio Black and the Corsair Force 180GB. I’d say that’s not bad for a hard drive with a bit of NAND in it. Wouldn’t you?

Of course, keep in mind the times taken here are cold boots, which means I am including the entire boot sequence including loading bios and all that good stuff. 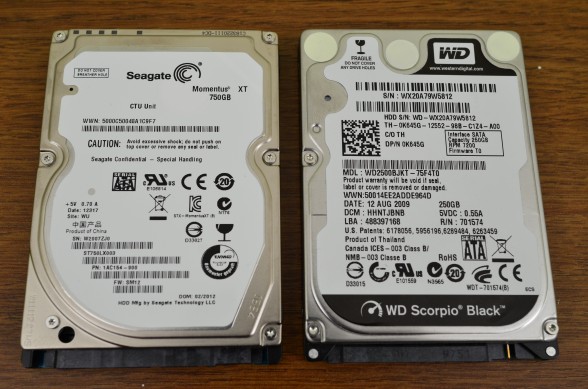 Overall, I found it a tad bit difficult to really sum up this drive in a single word because it’s definitely something for a certain group of people, and not that much for another.

To be honest, in the majority of our benchmarks it was really difficult to even notice that the drive had an internal NAND chip sitting in there. It just didn’t really do much. The benchmarks constantly threw random data sets at the drive, so it was really hard for the cache to work properly. Because of this, if you’re planning to use this drive as a storage drive where all you’re doing with the drive is random, large sequential transfers this drive probably won’t be any better than say another comparable 750GB 7200rpm traditional hard drive.

That being said, once we moved over to PC Mark 7, the performance improvement was certainly nothing to scoff at. In PC Mark 7, the drive was able to put up very solid numbers in both the “starting applications” and the “gaming” benchmarks, which pushed it up way past the Scorpio Black. Additionally, with the boot up time test we saw that while the Momentus XT ultimately wasn’t able to boot up quite as fast as the SSD, it was able to come close, at only 15 seconds behind. Of course, it was able to boot up a full 28.5 seconds faster than the Scorpio Black, so I think it’s safe to say that the cache works, and it work pretty damn well.

Looking at pricing on the Momentus XT, it’s definitely up there, but I think it’s still fair. On Amazon, the drive tested today, the Momentus XT 750GB is $174.99 while the Western Digital Scorpio Black 750GB is actually more expensive at $179.95. However, the non XT traditional Seagate Momentus 750GB 7200RPM (Bare Drive) comes in at only $114.22 and the Hitachi Travelstar 7200RPM 750GB comes in at only $119.99, so if you’re not looking for extra performance, but just that extra capacity, those are options as well. As for the OCZ Vertex 3, it does come in at $169.99, which is cheaper than the Momentus XT, but it only comes with 120GB, which is 630GB less than the Momentus XT.

For those on a desktop with plenty of expansion room and are thinking about either a SSD or the Momentus XT, I’d still take the SSD in a heartbeat. Make no mistake, in certain situations the Momentus XT is “like” an SSD, but the bottom line is that it still isn’t.

However, I feel like this drive was designed for a different purpose in mind. Consider the situation where a notebook owner is looking to upgrade that 160GB 5400RPM drive included with the notebook because it simply didn’t offer enough capacity. Most notebooks these days only have the capability to fit a single 2.5″ drive, and if you need something like 750GB, SSDs are just simply not an option. While higher capacity 240GB or 480GB SSDs do exist, they will also run you somewhere in the neighborhood of $300 – $700+ respectively. Considering the cost, if you’re currently on a notebook with no expansion space and you’re looking for a ton of disk space in addition to SSD “like” performance, the Momentus XT is quite possibly the only way to do it without putting your house down for a second mortgage.

Special thanks to Seagate Technology for making this review possible.