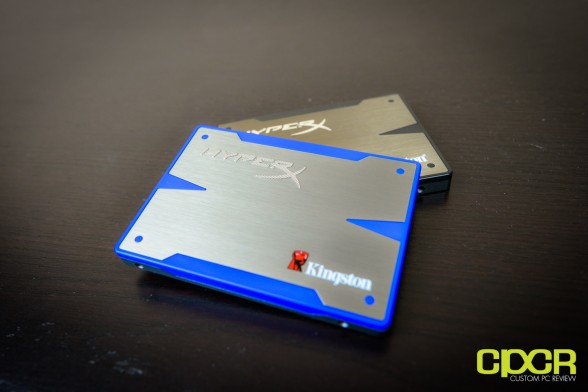 A couple weeks ago, we reviewed the Kingston HyperX 3K 240GB SSD and we were quite impressed with its exeptional value, great looks, and blazing performance. Today, we’ll be reviewing the 240GB edition of the original Kingston HyperX.

For those who aren’t familiar with SSDs, SSDs (in the most basic terms) are storage drives that store data on NAND memory controlled via a SSD controller. This NAND memory typically comes in many different forms, but regardless of what memory is used, this NAND memory only has a limited number of write cycles before data can no longer be written to it. These are typically counted in program/erase cycles, or P/E cycles.

With that out of the way, we’ll be talking a little bit about the difference between the original Kingston HyperX SSD and the newer Kingston HyperX 3K SSD. For the most part, the two drives are quite similar as both drives are using synchronous NAND and both have similar design (with the exception that they differ in color, which we’ll see a bit later). However, the main difference lies with the grade of NAND memory that’s being used as the original HyperX features 5,000P/E cycle NAND instead of the HyperX 3K’s 3,000 P/E cycle NAND. This means that the NAND in the original HyperX will last longer especially for those who must constantly move a lot of data around every day.

A Closer Look at the HyperX 240GB 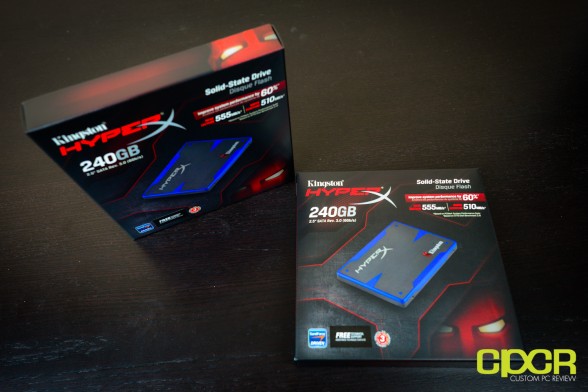 Here’s the packaging for the HyperX. It’s made very clear up front that we’ve got a 240GB SSD with read speeds up to 555MB/s and write speeds up to 510MB/s. 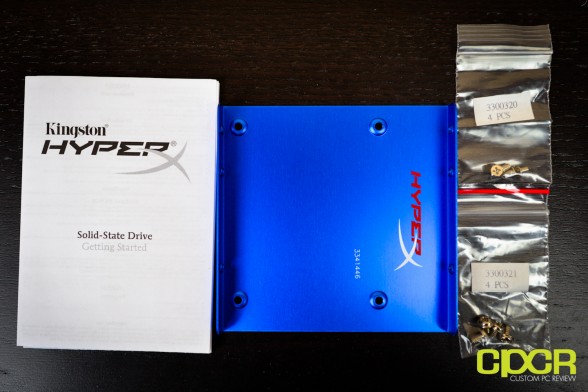 Accessories in the box include simply the documentation, a 2.5″ to 3.5″ adapter, and some mounting screws. 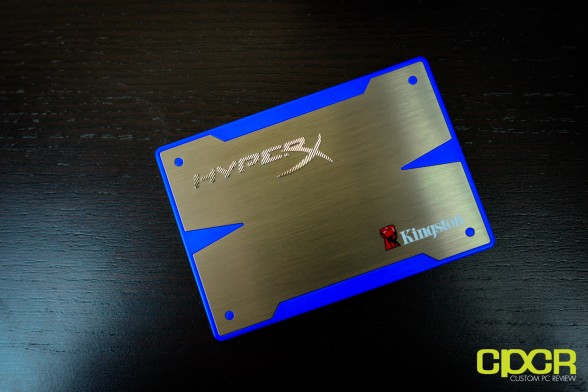 Taking the HyperX out of the box, it looks like the HyperX is identical to the HyperX 3K except the drive has blue trim instead of black. The top of the drive is finished with a metal finish and the top left of the drive includes a HyperX logo. 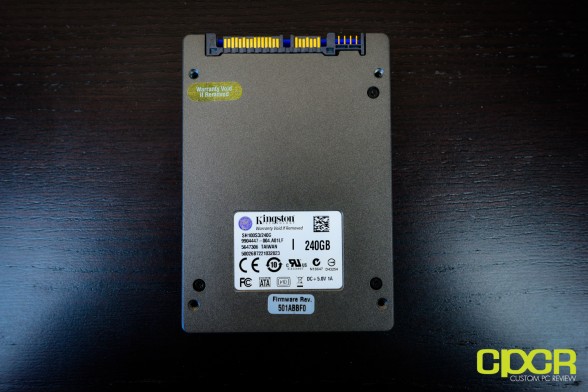 Here’s a look at the rear of the drive. We get a huge sticker in the middle which includes all the information for the drive. 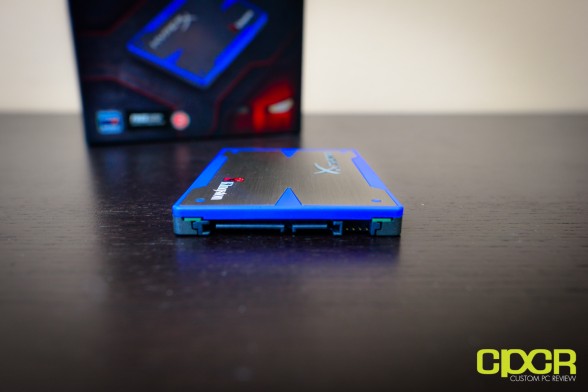 Here’s a look at the connectors on the HyperX. We’ve got a SATA 3 6GB/s and SATA power connector. Fairly standard stuff.

A Closer Look at the HyperX 240GB 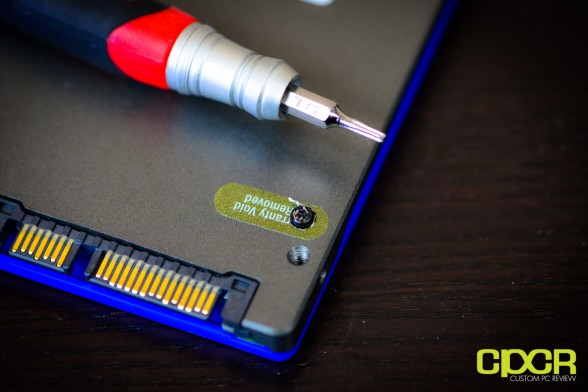 Unlike opening most other SSDs, opening up the Kingston HyperX (and every other Kingston SSD I’ve dealt with) requires both the use of a T6 torx screwdriver and breaking the warranty void if removed sticker. 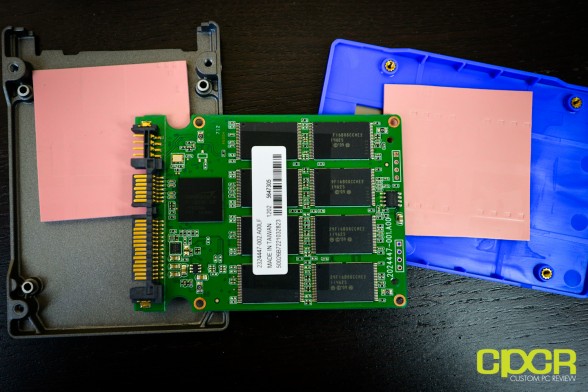 Opening up the HyperX, we’ve got a fairly crowded PCB. The top of the PCB includes a SandForce SF-2281 controller along with eight Intel branded NAND chips. 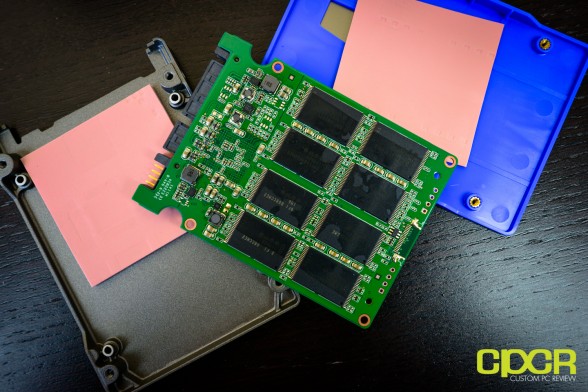 Moving around to the back of the PCB, we’ve got another eight Intel branded NAND chips. Both the top and bottom of the casing includes large heat pads for heat dissipation. 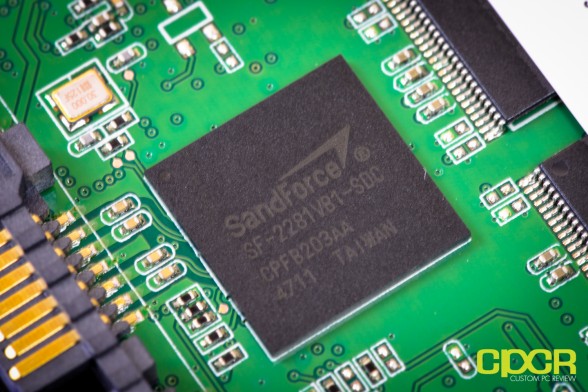 Here’s a closer look at the SandForce SF-2281VB1-SDC controller powering the HyperX. 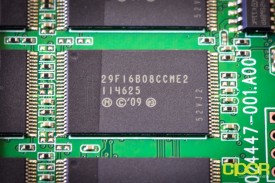 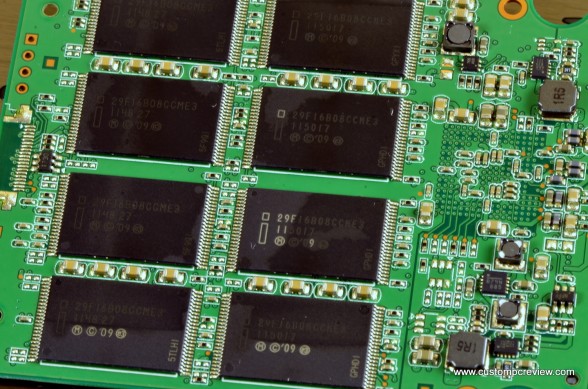 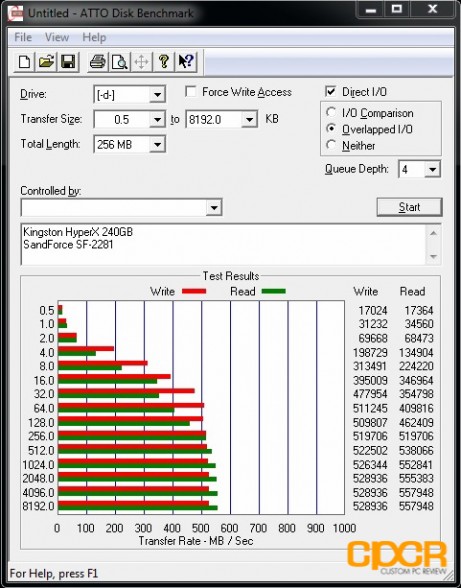 Moving into Crystal Disk Mark, it’s pretty apparent this is going to be one very, very high performing SSD. What’s particularly interesting here is how strong the incompressible writes are even compared to other top tier SandForce based SSDs. 4K numbers aren’t too bad either with the drive’s compressible and incompressible numbers looking near identical. 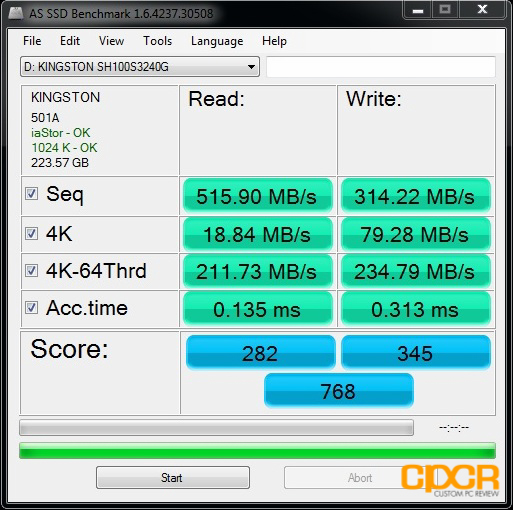 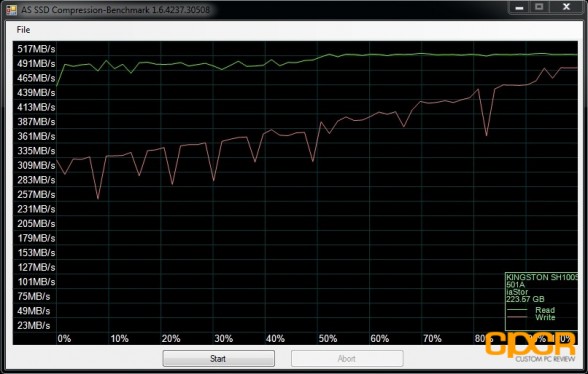 As usual, AS SSD confirms our findings in Crystal Disk Mark. What’s particularly interesting about AS SSD though is its compression benchmark which we’ve included here as well. Similar to other SandForce based SSDs, the drive’s write speeds start off fairly slow at around the 300 MB/s mark and begins to increase significantly as the data becomes more compressible. 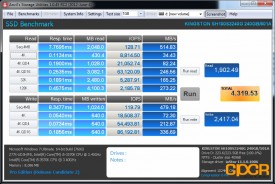 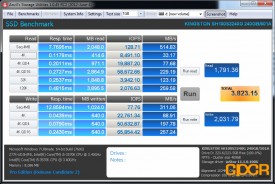 Here we’ve got the Anvil Storage Utilities numbers for both compressible and incompressible data. Again, we’re looking at some strong, well rounded performance from this drive. 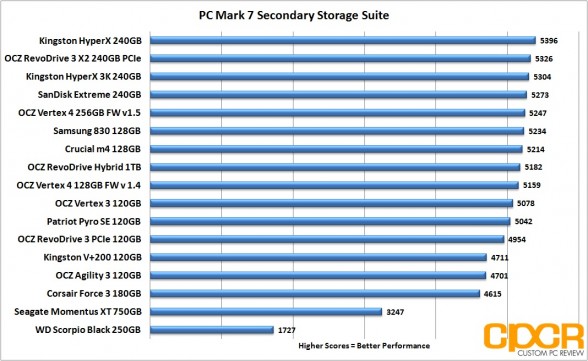 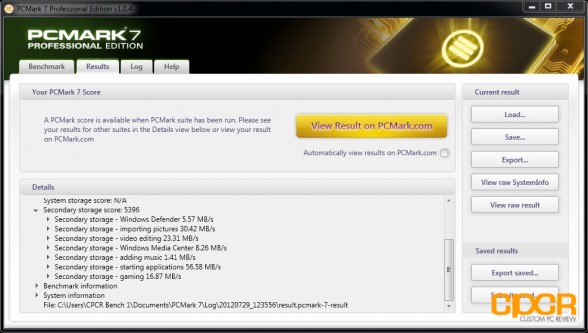 In PC Mark 7, the HyperX 240GB was able to snatch a full 5396 points, which puts it right at the very top of our chart. Not only is this the highest scoring drive we’ve tested on this benchmark, it outperforms the second on the list by a whopping 70 points!
[section label=7. Conclusion] 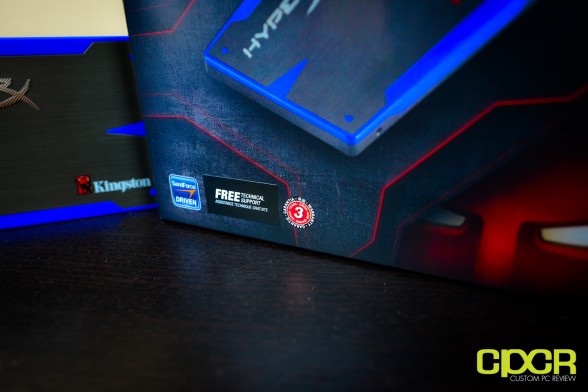 Pricing on the Kingston HyperX 240GB stand alone drive is currently around $374.99, which to be blunt is quite pricey for an SSD these days. However, do remember that Kingston is using higher endurance 5,000 P/E NAND, which is nearly double the lifespan of 3,000 P/E NAND. That said, most consumers probably won’t need high endurance NAND and will be perfectly fine with the equally capable Kingston HyperX 3K SSD, which produced very similar performance in comparison to the original HyperX SSD. However, given the higher endurance NAND included here and higher pricetag on this SSD, I’d really like to see Kingston offer a 5 year warranty instead of the 3 year offered here.

So I’ve mentioned that the HyperX 3K is perfectly fine for most consumers out there. In that case then, who should actually be interested in the original HyperX? Well, for the most part it’ll be those who work with a lot of data. Using the SSD as a photo/video editing scratch disk for example is something that the original HyperX with its higher endurance NAND would be better at as it’s capable of more writes overall.

With most manufacturers carrying only lower endurance 3K P/E NAND these days, SSDs with high endurance 5K P/E NAND are becoming increasingly rare. For Kingston to even offer a product like the original HyperX SSD to give consumers the option of choosing between a 3K P/E and 5K P/E is already a massive win by itself. Add in the fact that it’s one of the fastest SSDs we’ve tested so far? Even more win.

Special thanks to Kingston for making this review possible!

Currently the Kingston HyperX 240GB SSD is available at Newegg.