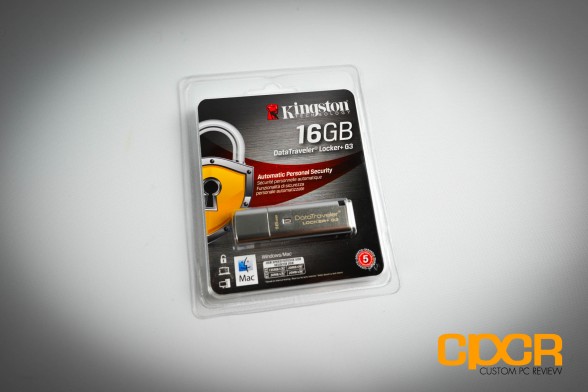 Whether it be pictures of your Friday night escapade, scans of your tax records, or your company’s secret next generation product design, the flash drive has become one of the most common methods of taking your data on the go.

Unfortunately, one thing we seem to overlook is data security. While flash drives have become quite convenient for taking lots of sensitive data on the go, it’s also extremely easy to lose, which is bad news for those who sometimes tend to be forgetful.

This of course means better performance and better ease of use as well.

A Closer Look at the Kingston DataTraveler Locker+ G3 16GB 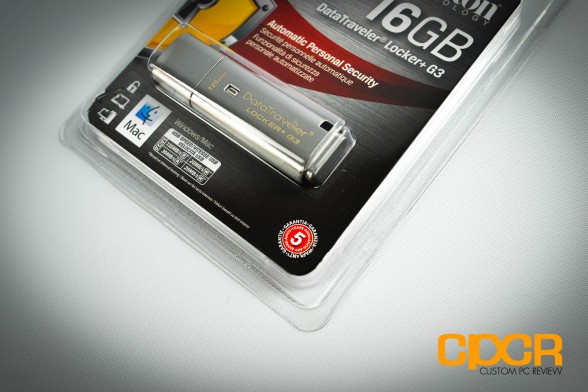 Not only is the drive secure, so is the packaging. Kingston decided to use the dreaded clamshell packaging for the DataTraveler Locker+ G3. 5 year warranty though. That’s pretty awesome. 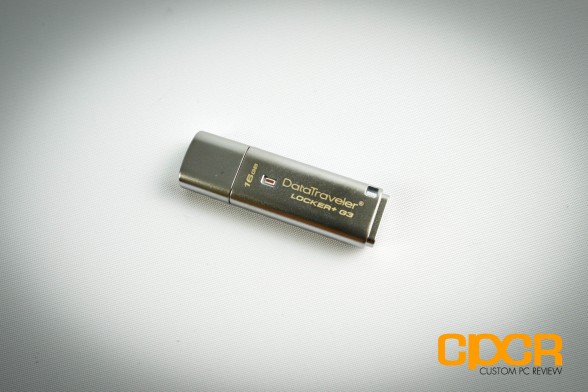 The drive looks fantastic out of the box. An aluminium casing wraps around the entire drive and the entire unit feels very solid. There’s a little hole at the rear of the casing so you can attach a strap or keyring to it although Kingston doesn’t include a strap with the package. 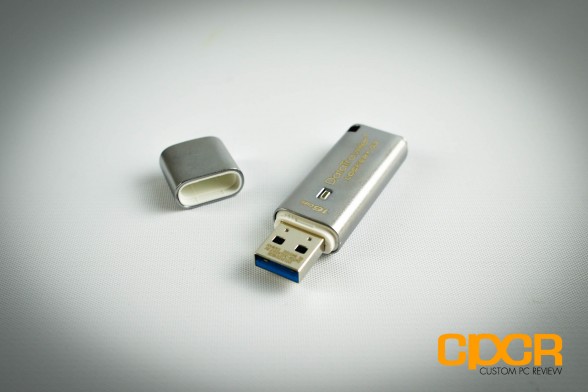 The Kingston DataTraveler Locker+ G3 uses a USB 3.0 interface, but is backwards compatible with USB 2.0 hosts as well at a reduced level of performance. The little square on top of the drive is the activity indicator light. 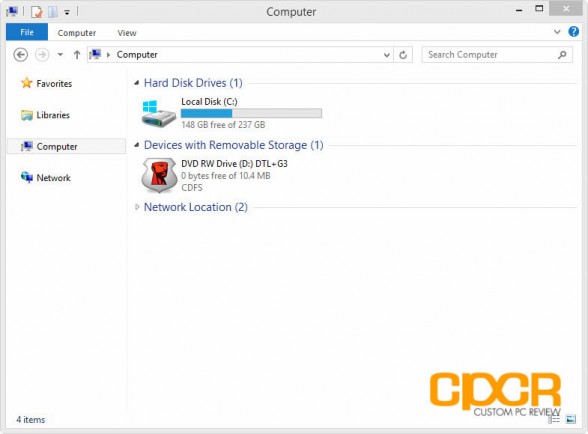 Once the Kingston DataTraveler Locker+ G3 is connected, the only thing that’ll show up is a launcher for the DTLocker+ G3 software. 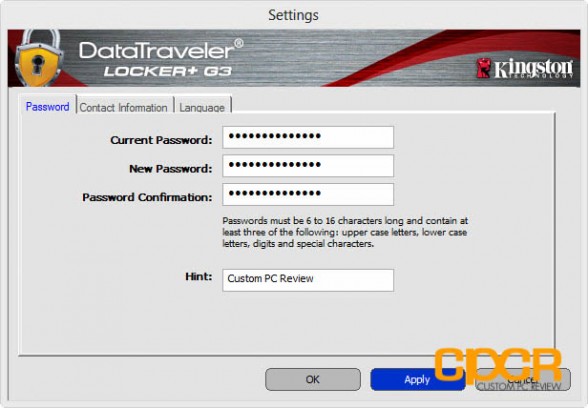 Once the software is launched, it’ll begin an initialization sequence where it walks you though a setup process which includes entering a password as well as contact information. 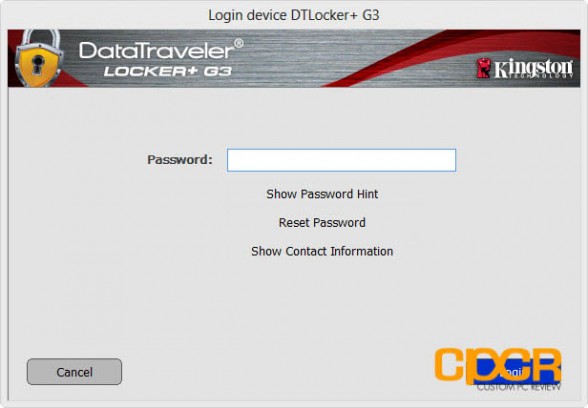 After the password is set, the user must enter it every time to access the drive. Failure to enter the correct password after 10 tries will result in the formatting of the entire drive. Your contact information may be viewed without entering the password, so the finder can still return the drive to you. Unfortunately because Kingston does use verification software here, it’s only compatible with Windows and OSX. Unfortunately you can’t use the drive with Linux or Android based devices. 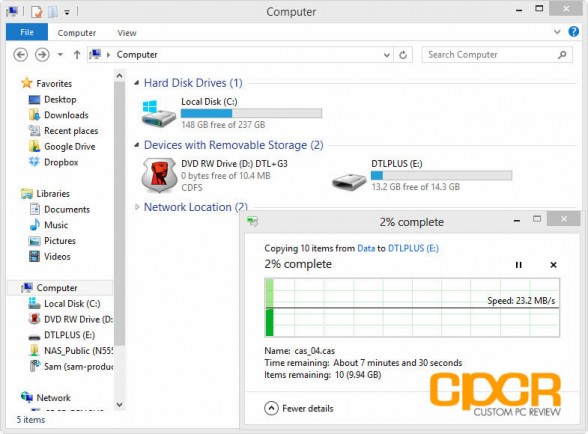 Once the password is entered and the drive is unlocked, the actual storage portion of the DataTraveler Locker+ G3 shows up as a separate drive. This is where you store your data for safekeeping. 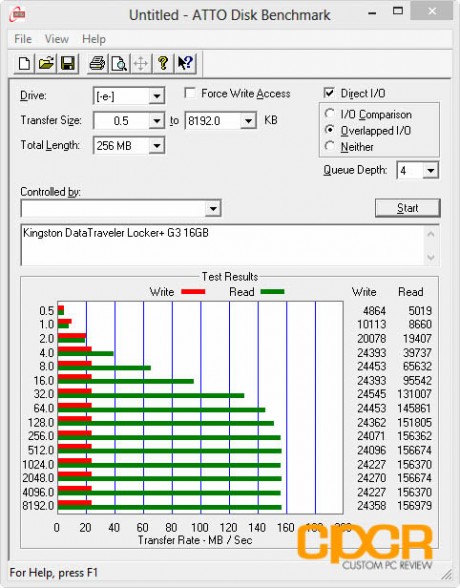 It’s not the fastest we’ve ever seen for a USB 3.0 flash drive, but it’s a lot faster than what you’d generally find from encrypted flash drives. 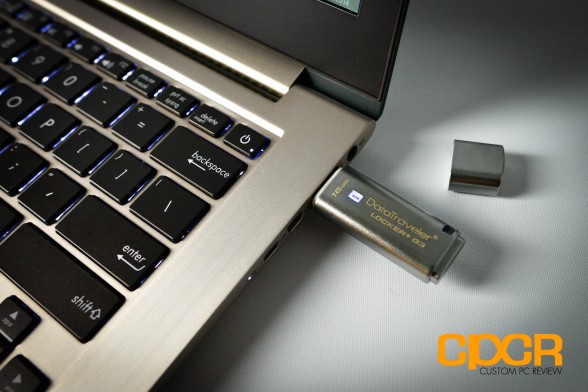 After spending a couple weeks with the Kingston DataTraveler Locker+ G3 16GB, I really can’t think of many bad things to say about the drive.

Build quality was solid and the aluminum shell definitely helps give the DataTraveler Locker+ G3 the feel of a product you’d expect will keep your data safe. I kept my unit on my keyring for the past couple weeks and it held up to the abuse just fine. There’s a couple minor scratches, but overall it’s fine.

The software included on the drive is pretty straightforward, even for those who aren’t the best with computers. All there had to be done was insert the drive, run the included software, and set a password. The entire process took me less than a minute to complete. Since the drive uses hardware encryption, there’s nothing to install, which is great if you want to use your drive on computers other than your own. The password is required every time the drive is connected, and it will wipe itself after 10 failed attempts, so I think that should be something to watch out for if you tend to forget your password. It probably wouldn’t be good if you accidentally wiped your drive after forgetting your password.

The one thing you should watch out for is that you won’t be able to use the drive with OSes other than Windows or Mac. Those who use Linux or those who want to use the drive for flashing a BIOS will be out of luck here. It’d be really nice if Kingston would allow the option of only encrypting a portion of the drive so that the rest can be used without launching the included software.

As for security, the DataTraveler Locker+ G3 is pretty secure. Without the proper password, nothing can be done to the drive. The only way to use the drive again after you’ve forgotten your password is to deliberately enter the wrong password 10 times and re-format the whole thing. There’s no password recovery option available in the software, only a hint, so if you forget your password you must either contact Kingston support (and hope they have a solution) or deal with the data loss. The way I’ve been doing things though is keep a cloud stored TrueCrypt encrypted weekly backup of the drive so that if I do end up losing it, I still have a backup available.