CPU coolers are a dime a dozen. Go to any specialty computer shop and you’ll find a variety CPU coolers from tons of manufacturers. On the other hand, GPU coolers are actually quite rare, with the number of companies actively producing coolers in the single digits. One of these companies is ARCTIC, who’s one of the top producers of GPU coolers on the market.

So, will ARCTIC actually put your GPU in the ARCTIC? Let’s find out! 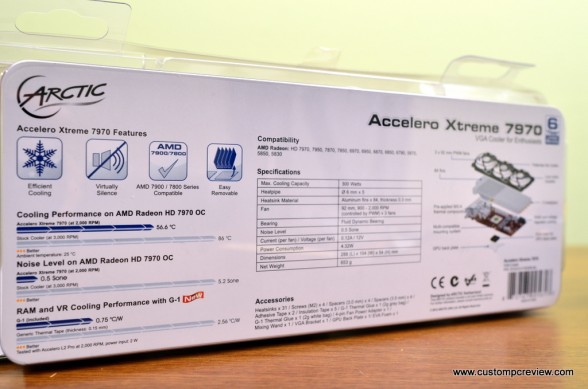 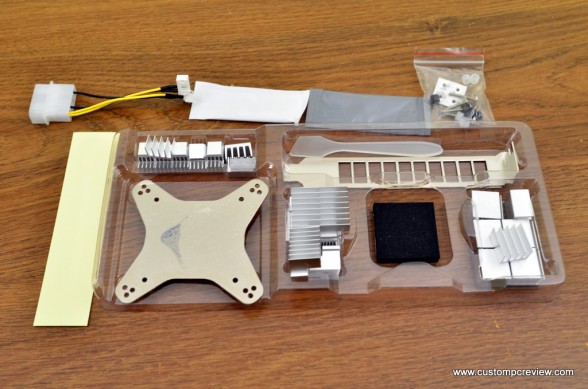 Included in the package you get everything you need to install the GPU ccoler. Unfortunately, this GPU cooler doesn’t have a single piece VRM cooler, but this allows this GPU cooler to be compatible with a wide range of graphics cards. Additionally, in order to attach the heatsinks (VRM, memory, etc.), ARCTIC has included a pack of their new G-1 thermal glue for attaching the heatsinks. Also notice that there’s no thermal paste. That’s because ARCTIC has already pre-applied their flagship MX-4 thermal paste on the baseplate itself. 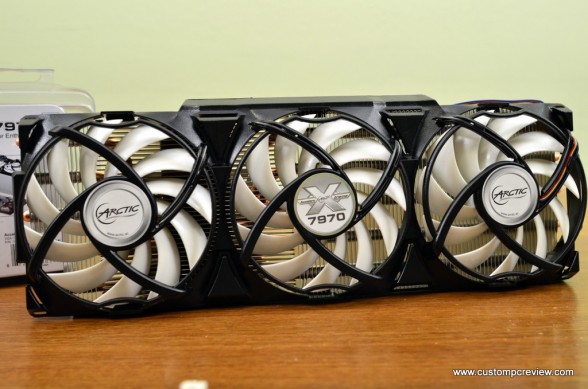 Up front we’ve got those 3x 92mm white PWM fans. 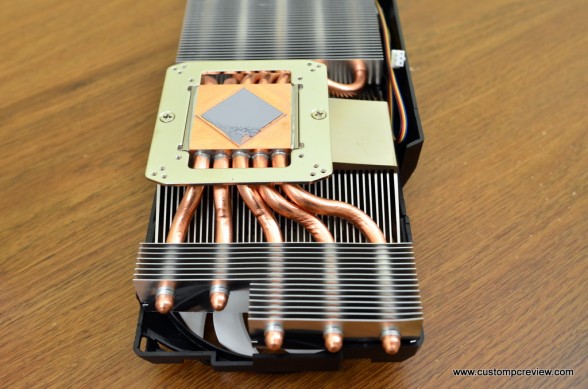 Around the bottom, we see the baseplate along with a thick layer of thermal paste attached. Unfortunately, I didn’t realize there was thermal paste down there until I touched it which is why it looks a bit messed up in the picture. If you do happen to mess it up, make sure to fill in the area using additional thermal paste to maximize heat dissipation. ARCTIC obviously recommends their own flagship MX-4, but anything should work. 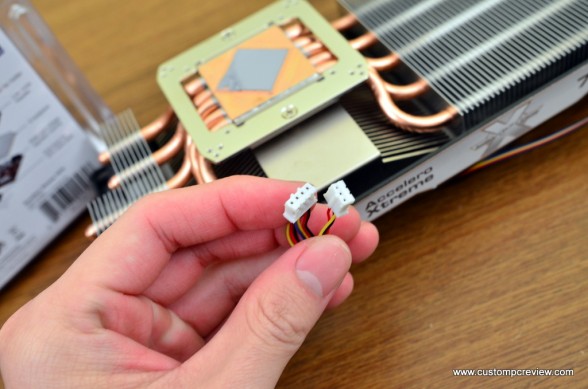 Attached to the fans is a 4 pin connector along with a 3 pin connector. Fortunately for those with 4 pin headers on their graphics cards, you’ll be able to take advantage of the PWM fans, which means the fans will spin down when they’re not needed and spin up when they are. 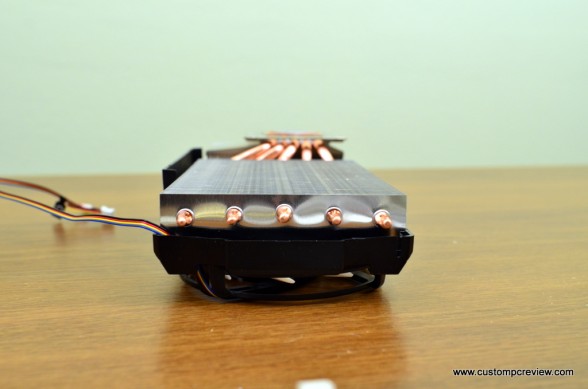 Running across the entire length of the heatsink, we see five 6mm heatpipes. The heatsink itself includes 84 quite densely packed fins at 0.3mm thick each. The build quality is excellent. Of course, with a 6 year warranty I wouldn’t expect anything less. 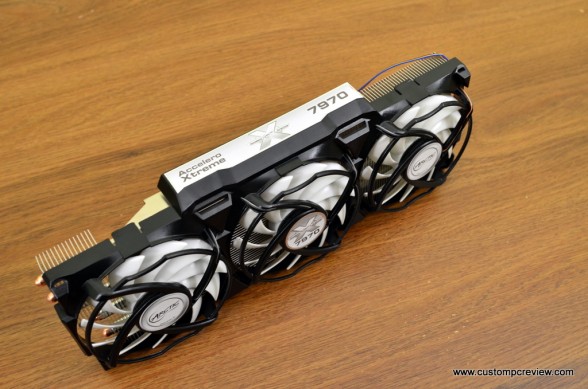 Here’s a top view of the heatsink along with the plastic fan enclosure. As you can see up top, the cooler is clearly branded “Accelero Xtreme 7970”. I’m going to be mounting the cooler on my reference HD 6970, but this cooler is designed primarily for the HD 7900 series as the name implies.

The installation process is quite long and quite complex, and maybe even tedious. Be sure to leave a couple hours or so for a good installation. Also, make sure to go print out a copy of the instructions first or do the install in front of a computer. For some reason (ARCTIC’s green initiative) an instruction manual was not included. While I think this is fine for easy-to-install peripherals such as mice and keyboards, I’m not so sure this is a good idea on a GPU cooler.  Unless you’re an expert at this type of install, you’ll need the installation guide.

Below are some of the highlights of the installation process: 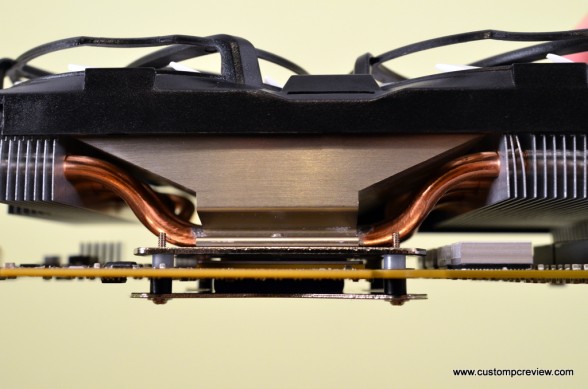 As you can see, the backplate is attached via screws to the baseplate of the GPU cooler. There are no bolts at the end. Instead, the holes in the baseplate are threaded, which allow you to screw the screws in. Between the backplate and the GPU, you will need to place 4 spacers, which are very small and very easy to lose. Additionally, between the GPU and the baseplate, there are an additional 4 spacers that must be placed prior to screwing the entire setup together. As you can imagine, installation of this is quite difficult. Here you can also see a couple of the VRM heatsinks mounted. They’re attached only by the glue and not accessible after the heatsink is installed, so be sure they’re stuck on there good!

That being said, this the order of install I found to be the easiest to install the cooler: 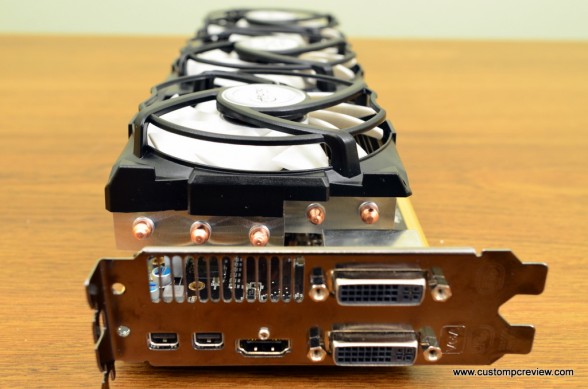 As you can see here, once the massive cooler is installed, the entire GPU will take up 3 slots. An additional slot cover is included for additional case ventilation. 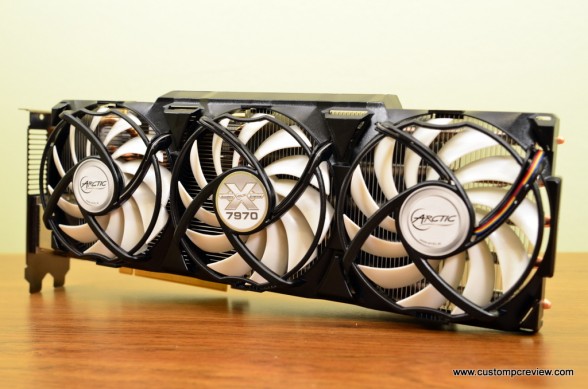 Finally, we have a frontal view of the GPU with the Accelero Xtreme 7970 installed. The monstrosity of a cooler covers the entire length of the GPU for maximum cooling performance. 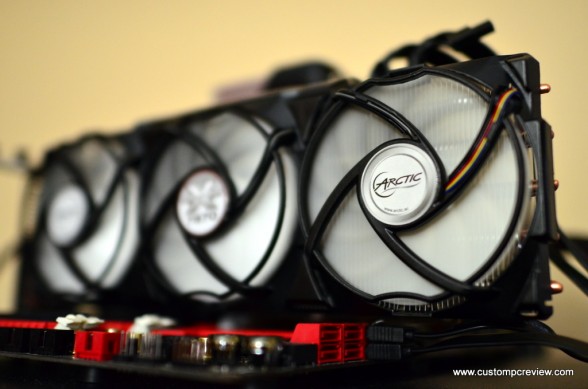 For testing, we used the FurMark 1.9.2 GPU Stress Test. FurMark is a GPU stress test that pushes the GPU to its maximum limits – limits games will never reach, which means we’ll be able to load the graphics card up to get maximum possible temperatures as well. 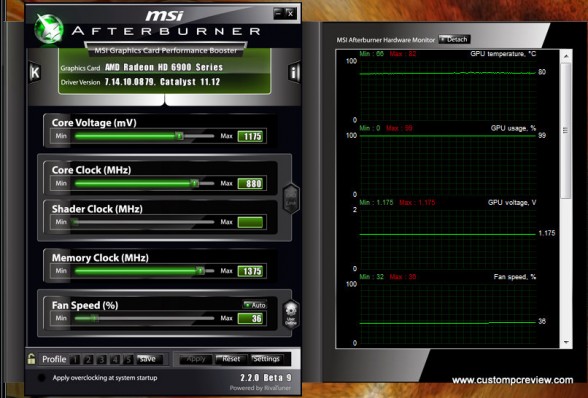 Here’s a screenshot of the MSI HD 6970 under full load with fan set to auto. As you can see, the temperatures hit 80°C. 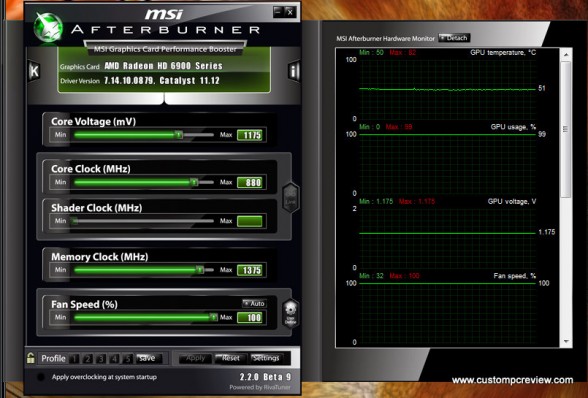 Next we loaded the GPU up once again except this time we cranked the fan to 100%. As you might imagine, the stock turbine fan on the HD 6970 was enough for me to want to punch a dolphin. Yeah, it’s that bad. 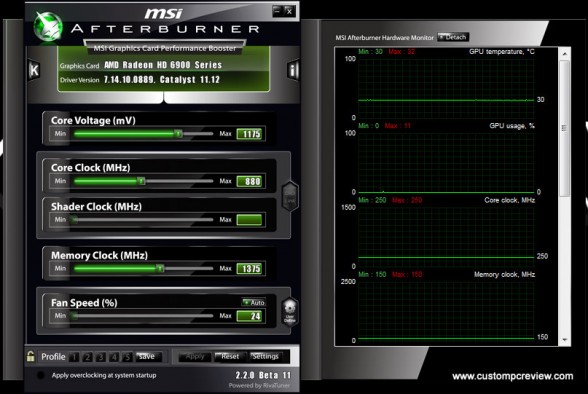 Next, we tested the HD 6970 with the Accelero Xtreme 7970 GPU cooler. First, we have a screenshot of some idle temperatures. 30°C. Not bad… 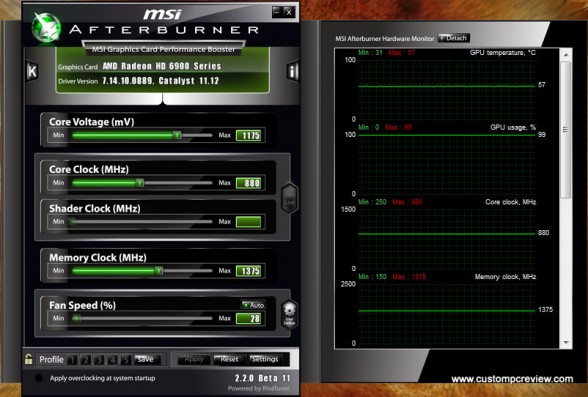 Next, we fully loaded Furmark, and yes, the Accelero Xtreme 7970 performed wonderfully. Under full load, the GPU temperature stayed under 57°C, which is a  full 23°C drop in temperatures. However, that’s only half the story. Since the fans are currently set to auto and have PWM capability, the fans ran very quiet, almost as quiet as the stock fan at idle speeds. Impressive! 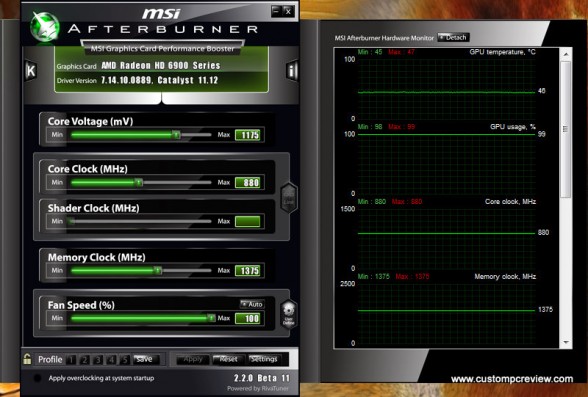 Finally, while trying to find out just exactly how much performance can be squeezed out of the Xtreme 7970, I decided to crank the fans up to a full 100%, or 2,000rpms. As you can see, the temperatures dropped significantly again going from 57°C to 46°C, a full 11°C! Once again, I was completely impressed with the performance. Unfortunately, at this point the fans do make themselves noticeable, so I do prefer the fans on auto. 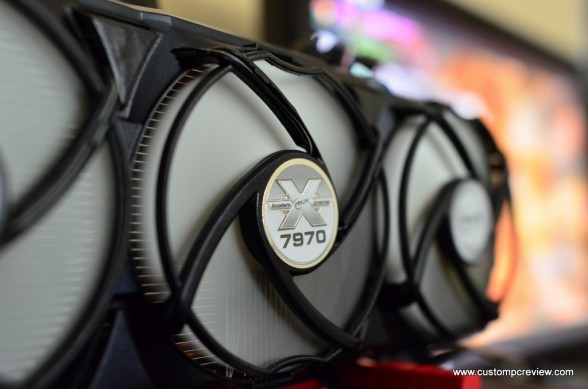 All things considered, the ARCTIC Accelero Xtreme 7970 is the best GPU cooler we’ve tested to date. For those interested in a good blend between cooling and noise, or even maximal cooling for that maximal overclock, but don’t want the maintenance hassles or risk associated with water cooler, this is is the next best thing.

The ARCTIC Accelero Xtreme 7970 is currently available direct from ARCTIC.