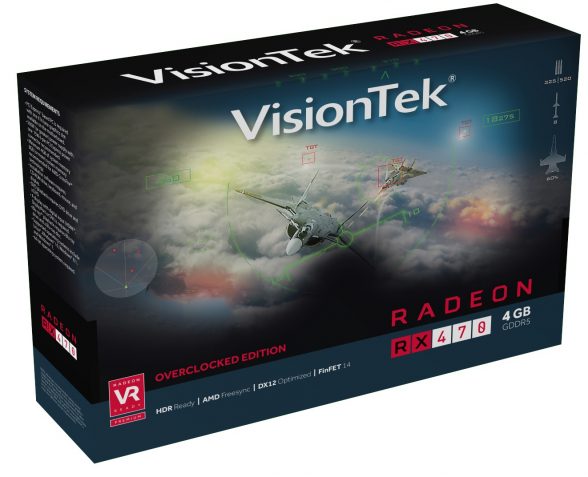 Today, VisionTek, a company known for making Radeon GPUs, has announced their new lineup of Radeon RX 400 series GPUs based on the RX 470 and RX 460 models.

The company did not reveal much beyond basic specifications for both GPUs, while they did have retail packing to offer, we still do not have any photos of the graphics cards themselves.

Starting with the RX 470, we have a factory overclock with a GPU Clock of 1226 MHz, which is 20 MHz over reference specifications. The card features the usual 3x DisplayPort 1.4 ports, 1x HDMI 2.0 and 1x dual-link DVI-D. VisionTek’s website lists a single 6-pin PCIe connector as a requirement for powering the GPU. 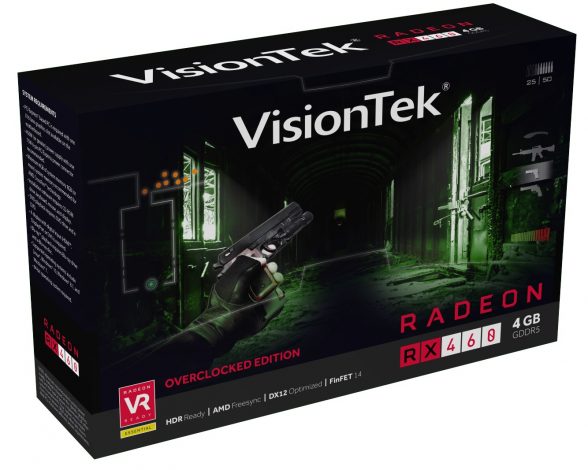 The RX 460 Overclocked Edition, like the RX 470 features a factory overclock of 1220 MHz, which is also 20MHz over the reference spec. For memory, we have 4GB of GDDR5 and connectors include 1x DisplayPort 1.4, 1x HDMI 2.0, and 1x dual-link DVI-D. Like the RX 470, VisionTek’s website lists a single 6-pin PCIe connector as a requirement. This means we can expect this model to have a bit more overclocking headroom, as it will likely draw more power than the reference models which are powered exclusively via the motherboard’s PCIe slot.

Both cards will be covered by VisionTek’s 2-year limited warranty. No word on specific pricing, but VisionTek says the cards will be available at major retailers and e-tailers soon.