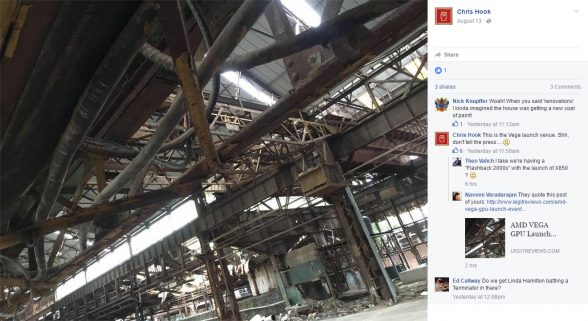 For those of you eagerly awaiting information about AMD’s upcoming high end, HBM2 equipped Vega GPU based graphics cards, here’s a bit of interesting news that’s been circulating over the web over the past few hours.

Chris Hook, AMD’s Senior Director of Global Marketing, recently posted up an image of what appears to be some sort of abandoned warehouse or factory on his Facebook page. Cool, but not too interesting. However, he later also posted a comment saying “This is the Vega launch venue. Shh, don’t tell the press…..:)“. Hmm… Now that just got a whole lot more interesting.

While the image itself doesn’t tell us a whole lot about the venue, it does tell us that AMD is actively already planning a launch event and the venue has already been selected. Previously according to AMD roadmaps, AMD was expected to launch Vega sometime in early 2017, but we’ve been hearing rumors that AMD may be pushing their Vega launch to October 2016. This gives AMD a few more months to finish setting up the venue for a launch which seems more and more likely by the day.

Given that Chris Hook is Facebook friends with a ton of journalists and analysts, this obviously is intended to ensure that nobody forgets about Vega with all the recent Nvidia news circulating the interwebs. Or it could just be a prank for some laughs and giggles in the office. What are your thoughts? Leave them in the comments below!