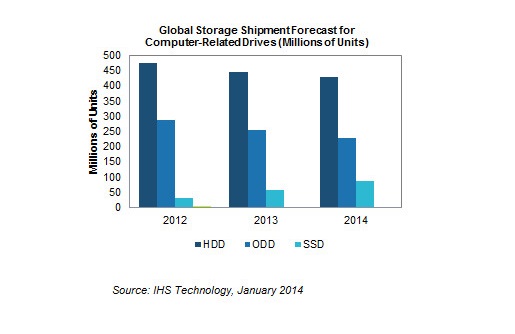 The numbers are out and according to a recent report published by global information company, IHS Technology, SSD (Solid State Drive) shipments in 2013 have gone up a whopping 82% while HDD (Hard Disk Drive) and ODD (Optical Disk Drive) shipments fell 7% and 12% respectively. While the news isn’t a big surprise for those familiar with the computer storage industry, it’s always good to see solid numbers backing projections.

“In contrast to the stable but declining HDD market, the SSD industry is in aggressive expansion mode… Improved price points have led to a recent decrease in the cost of SSDs and a resulting higher adoption of the drives by Ultrabooks and similar ultrathin PCs. And new enterprise products, ranging from drives to caches to arrays, have given many I.T. departments greater flexibility to integrate SSDs into corporate storage systems.”