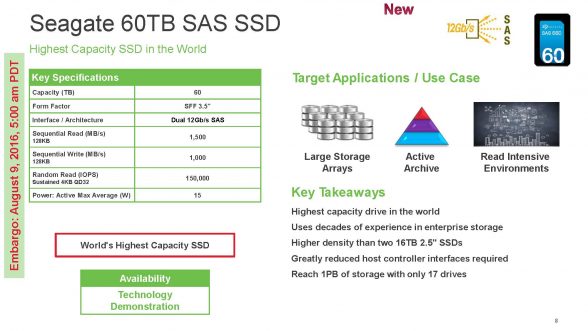 In addition to the Nytro XP7200, Seagate also unveiled an unnamed 60TB SAS SSD, which Seagate claims is the highest capacity SSD in the world. In order to achieve such a feat, Seagate was able to utilize the same controller used in the Seagate 1200.2 SSD, but also included a staggering 1,280 NAND flash dies linked via bridge chips. These bridge chips allow the SSD controller to communicate with far more NAND dies than would typically be allowed without the bridge chips.

Designed for large storage arrays, archives and other read intensive applications, performance on the drive is weighed towards reads with sequential read performance rated at up to 1,500MB/s and random read performance rated at up to 150,000 IOPS. What’s special about this drive is that it’s rated with a maximum active average power draw of just 15W. Considering just 17 of these drives drawing 15W each is able to reach 1PB, this is far more efficient than your average hard drive farms with over a hundred drives needed to reach these capacities.

Although it’s currently just a technology demo at this time, Seagate plans to begin production of these drives next year.