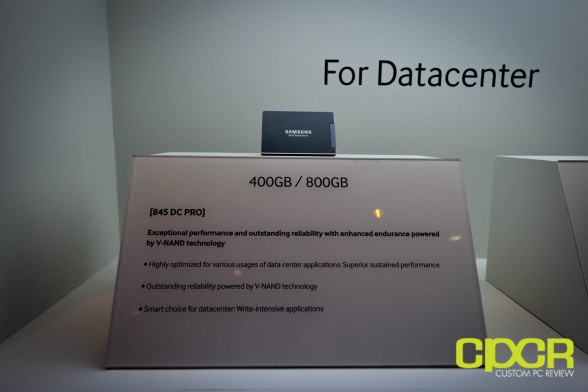 As one of the more quiet introductions for the SSD Summit, Samsung recently introduced a new 3D V-NAND based datacenter/enterprise oriented SSD, the Samsung 845DC PRO, which along with the previously reviewed Samsung 845DC EVO, would be among the first of its kind to go to retail market rather than being OEM/enterprise partner only.

Samsung claims that this drive will deliver not only superior performance with a rated 92,000/51,000 IOPS 4K read/write (800GB), but it’s also high endurance with a rating of 10DWPD (Drive Writes Per Day) for 5 years. While competitors such as Micron, Intel and SanDisk are capable of similar performance/endurance with higher end 2D planar NAND based SSDs, Samsung expects this drive to retail for only ~$1.50-$2.00/GB, which will significantly undercuts the competition when it’s released sometime this month.

We should be getting these drives in for review in the near future, so stay tuned.