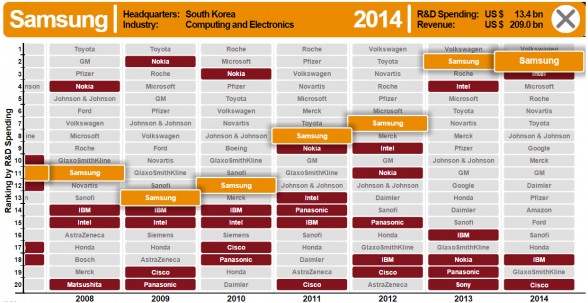 A new ranking from Strategy& (PwC) has listed Samsung and Intel as 2014’s top technology R&D spenders, far exceeding the R&D investment of any other technology company on the market. Samsung and Intel are also second and third in terms of R&D spending overall across all industries with only Volkswagen outspending Samsung by a mere $0.9 billion ($100 million).

According to the ranking, Samsung has increased R&D spending to a whopping $13.4 billion this year from $10.4 billion last year while Intel spent a not-too-shabby $10.6 billion, up from the $10.1 billion spent last year.  This far exceeds the only other two major technology companies who made the list, IBM and Cisco, who invested a relatively weak $6.9 billion and $5.9 billion respectively.

While total R&D spending is an important figure, it’s also important to note that Samsung is much larger company and rakes in almost 4x more revenue. Unlike Intel who’s primarily a chip designer, Samsung is not only a chip designer, but also a smartphone maker, camera maker, TV maker, home appliance maker, system integrator and much, much more. In other words, although Samsung spent $13.4 billion, it’s only 6.4% of total revenue spread out across multiple technologies while Intel on the other hand reinvests a staggering 20.1% of their total revenue mostly back into chip design and manufacturing.

Of course, it’s easy to see why both Samsung and Intel have spent so much on development in the past few years. Samsung has been making huge strides in the semiconductor market lately investing heavily into making their Exynos SoCs competitive and investing heavily into the rapidly growing NAND flash market. They’re also working on new smartphone development as well given that 2014 has been a pretty dismal year for Samsung so far. On the other hand, Intel has also been making huge investments to get their x86 chips competitive with competing ARM offerings in the mobile market after years of missed opportunity. Intel’s previous roadmap was to try to ship 14nm mobile parts by the end of the year, but it seems unlikely to happen before 1Q2015.

Will these investments pay off in the next couple years? Only time will tell. So far Intel’s investments over 2013 and 2014 hasn’t generated much growth in the company, but things are looking up for the company when 14nm parts launch in 2015.  As for Samsung, well their revenue has increased ~$100 billion in the past 5 years, so they must be doing something right.