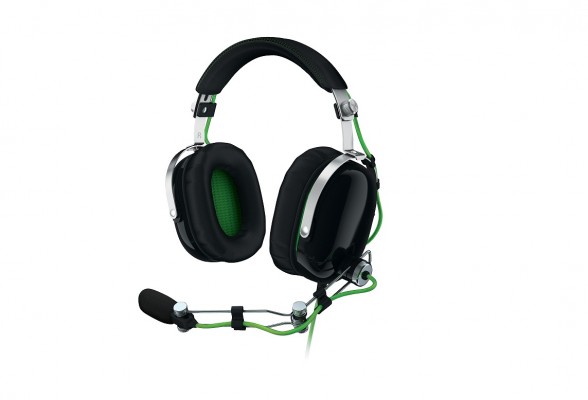 Razer BlackShark is Locked, Loaded and Ready for Take-off

Razer­, the world leader in high-performance gaming hardware and software, today announced the addition of the Razer BlackShark Stereo Gaming Headset. Inspired by tactical aviator headsets and armed with total audio immersion, Razer’s newest piece of audio hardware comes as a Razer-branded version of the popular Battlefield 3 Razer BlackShark, a headset that the company developed from the ground up for the Battlefield franchise and released earlier this year at E3.

Designed to look and feel like the headsets worn by attack helicopter pilots, the Razer-green accented BlackShark is your battle-ready solution for powerful, immersive PC gaming audio. The Razer BlackShark delivers superior sound isolation, with full circumaural ear cups.  The headset is built with memory foam ear cushions that mold to the shape of your ears for maximum comfort over extended use, making the Razer BlackShark the most vital weapon for your total PC gaming and music enjoyment.

Whether blocking out the loud noise made by a deadly attack helicopter, the construction work just outside the home or any other ambient sounds, gamers will hear nothing but the sweet, immersive sounds of ownage, destruction and victory.

Gamers interested in a versatile headset on-the-go need look no further. Detach the microphone boom and take the lightweight headphones with you for a stylish audio solution. The BlackShark plugs directly into any device with a 3.5mm audio jack, offering compatibility with nearly every audio device on the market today.

“Soldiers in intense combat situations need to be fully focused with minimal distractions to take the objectives successfully and come out alive.  The same goes for gamers seeking the win – and that’s what the Razer BlackShark gaming headset was built to deliver,” said Robert “RazerGuy” Krakoff, president of Razer USA. “When you stop gaming to get out and about, detach the boom microphone and you’ve got the perfect sound-isolating headphones for your audio on-the-go.”

About the Razer BlackShark Gaming Headset:

With a sleek aluminum design and green accents, the Razer BlackShark brings forth extreme comfort for long, extended missions and top-notch sound isolation. The circumaural design and leatherette sealant of the headset’s ear cups, block out all unwanted, ambient noise and allows players to only hear the awesome, intense audio of their games and music.

The Razer BlackShark’s detachable boom microphone and audio / mic splitter adapter cable make this a highly versatile headset, at home both at a gaming setup and out on the streets for music playback.  Go from immersive gaming audio and smack-talking foes at your desktop to listening to your music out and about in seconds.

For more information about the Razer BlackShark, please check out the product page here.