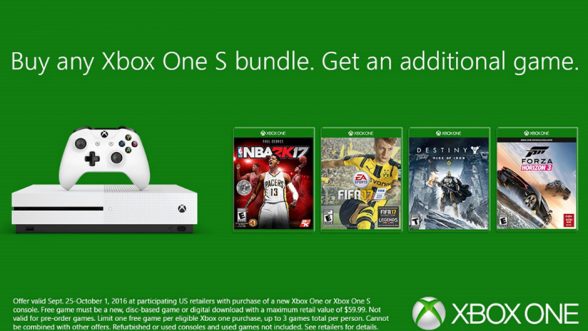 Still on the fence whether to pick up a Xbox One S or not? We understand your pain and I think Microsoft does too.

To ease that pain a bit, Microsoft recently announced a new Xbox One S bundle promotion where they’re giving out a free game in addition to any Xbox One S bundle purchase. The free game will include a choice of either NBA 2K17, FIFA 17, Destiny: Rise of Iron, or Forza Horizon 3.

This means if you opt for say the Xbox One S Minecraft bundle, you could get the Xbox One S, Minecraft and NBA 2K 17 for $299. Minecraft doesn’t float your boat? Well, you could also opt for the Xbox One S Halo Collection bundle and get Halo along with Destiny: Rise of Iron for free. If you were originally planning on picking up one of those games, might as well save $60 and get it with the promotion.

The Xbox One S free game promotion will only last until October 1, so be sure to pick up your Xbox One S bundle before the promotion expires!