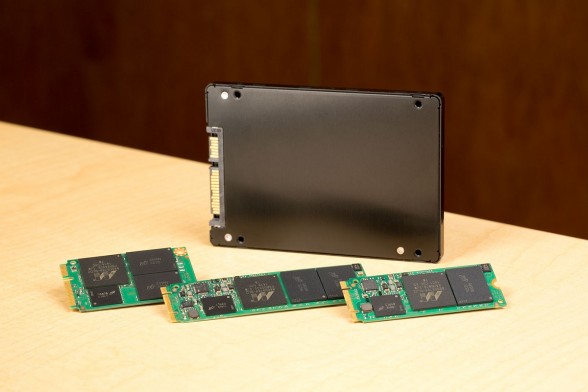 According to a press release, Micron recently announced the new M600 SSD, which is Micron’s latest entry into the client SSD space. Available to OEMs only, the Micron M600 will be Micron’s new flagship client SSD, succeeding the Micron M550 in both performance, power efficiency, and reliability.

Internally, the new Micron M600 is pretty similar to the recently launched Crucial MX100 we reviewed previously. It’ll be equipped with both Micron’s latest 128Gb 16nm Synchronous MLC NAND along with Marvell’s 88SS9189 controller. Nothing to shocking there.

What is surprising is the rated performance and endurance figures. Despite being nearly identical to the Crucial MX100 in terms of hardware, the Micron M600 is significantly faster. This is because Micron has made some significant improvements to the firmware to make the M600 far better than its retail cousin, the Crucial MX100.

The biggest improvement is a new feature that Micron calls Dynamic Write Acceleration, or DWA for short. The way DWA works is that it basically turns unused NAND in the drive into simulated SLC. This simulated SLC is then used as a write cache, similar to what we see in Samsung’s TuboWrite or SanDisk’s nCache. However, unlike Samsung or SanDisk’s solutions which only set aside a tiny portion of NAND, Micron’s DWA is far more powerful in that it’s capable of dynamically adjusting the size of the SLC cache, utilizing as much as all the free space available on the drive.

Illustrated above is a chart found in a tech brief for Micron’s DWA technology. We can see that the Micron M600 is capable of maintaining maximum performance until ~46% drive saturation. Then performance dips as the drive’s dynamic SLC cache begins converting itself into its original MLC form. Finally, the drive’s performance hits steady state where the drive’s SLC cache is converted entirely into MLC and all writes are written into the main MLC NAND. What this basically means is as long as you keep the drive relatively empty <50% full more or less, you’ll be able to enjoy ultra-fast performance thanks to the DWA cache.

The Micron M600 will be available in a variety of form factors including 2.5″ SATA, mSATA, M.2 2280, and M.2 2260. The drives should be available to OEMs via Micron’s distributors. No word on pricing at this time.