Over the past few weeks, users across various websites, Reddit, and the official NVIDIA forums have been posting non-stop about a potential flaw in the Nvidia GeForce GTX 970. Perceptive users discovered that although the GTX 970 has 4GB of VRAM, when VRAM usage is pushed to beyond 3.5 GB, VRAM bandwidth suddenly takes a pretty serious nosedive. 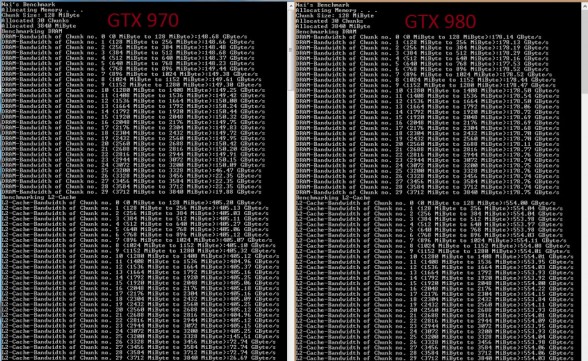 A screenshot (above) from Lazy Gamer shows users running VRAM benchmarking software on a GeForce GTX 970 and a GeForce GTX 980 side by side. While the GTX 980 VRAM bandwidth is a consistent 178GB/s no matter how much VRAM is used, the GeForce GTX 970 shows VRAM performance dropping from ~150GB/s drops down to a sad, sad ~20GB/s.

Although this issue would be completely unnoticed for 1080p gaming, users who run 1440p, 1600p, 4K or higher resolutions which require additional memory have reported stuttering when trying to play games such as Shadow of Mordor at max settings with ultra textures. Numerous theories on why this is happening has been proposed ranging from faulty drivers, VBIOS conflicts, and quality control issues; however Nvidia has so far declined to provide a concrete answer as to what the problem actually is.

That said, Nvidia did provide an official statement which was first posted by PC Perspective, then confirmed by Nvidia forum moderator, ManuelG.

The GeForce GTX 970 is equipped with 4GB of dedicated graphics memory. However the 970 has a different configuration of SMs than the 980, and fewer crossbar resources to the memory system. To optimally manage memory traffic in this configuration, we segment graphics memory into a 3.5GB section and a 0.5GB section. The GPU has higher priority access to the 3.5GB section. When a game needs less than 3.5GB of video memory per draw command then it will only access the first partition, and 3rd party applications that measure memory usage will report 3.5GB of memory in use on GTX 970, but may report more for GTX 980 if there is more memory used by other commands. When a game requires more than 3.5GB of memory then we use both segments.

We understand there have been some questions about how the GTX 970 will perform when it accesses the 0.5GB memory segment. The best way to test that is to look at game performance. Compare a GTX 980 to a 970 on a game that uses less than 3.5GB. Then turn up the settings so the game needs more than 3.5GB and compare 980 and 970 performance again.

Here’s an example of some performance data:

With this statement however, Nvidia doesn’t directly address the GTX 970’s reported memory issue. Rather, they’re pointing at gaming performance and trying to suggest that the memory bandwidth issues users have been reporting doesn’t actually affect gaming performance… all that much. Additionally, the statement also suggests that the issue may be a limitation of how the GTX 970 is designed which might not be resolved by a simple driver update.

That said,  if you’re considering a GeForce GTX 970, it’s still without a doubt a great graphics card with great gaming performance. However if you’re in the population with a high resolution monitor or are planning to purchase one in the future, it might be wise to wait for Nvidia to issue a final update to this issue or consider another alternative.