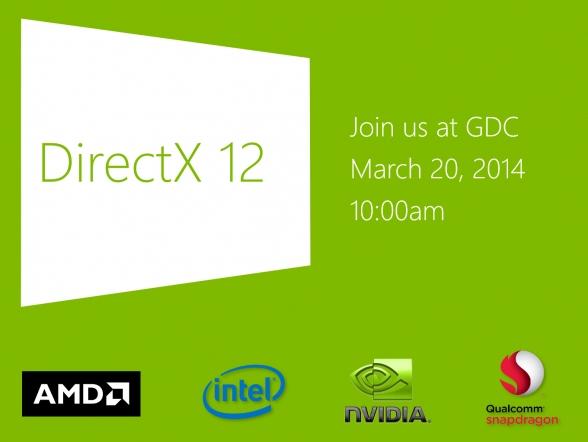 It’s been what seems like an eternity since DirectX 11 was released a little over three years ago and it looks like it’s finally time for a major update. According to a new tweet by the official DirectX 12 Twitter account and an announcement on Microsoft’s MSDN blog, Microsoft recently announced that they will be unveiling DirectX 12 at GDC 2014 which will take place on March 17-21 (in roughly two weeks).

“Come learn how future changes to Direct3D will enable next generation games to run faster than ever before!

In this session we will discuss future improvements in Direct3D that will allow developers an unprecedented level of hardware control and reduced CPU rendering overhead across a broad ecosystem of hardware.”

Currently, no details have been released on DirectX 12 other than hints that it will give developers lower level access to hardware and reduce CPU rendering overhead. Additionally, no game developers have announced support for the new API just yet, but given the fact that AMD, Nvidia, Intel and Qualcomm are listed as hardware partners, it should see much wider support out of the gate than AMD’s Mantle API which was announced with great fanfare late last year.