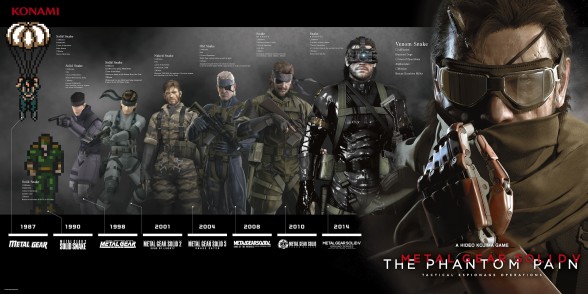 ! What was that noise?! Well if you heard it but didn’t see anything at your guard post you are must likely going to for an unexpected nap… if you are lucky. This is the fate of all those guards who signed up for duty on the base that is housing something needed by our hero. If you have not been living in a cave for the last 20 years then you have felt the joy if choking out enemy soldiers as Snake.

A new chapter in the award winning saga hits PS4 and Xbox One on September 1, 2015. PC gamers have to wait a few extra weeks until the 15th, but what’s a couple more days for the indisputably superior platform? With gameplay and cut scenes flowing together so beautifully plus all the added features of open world play, how will you save the day or totally destroy it? We’ll  be looking forward to seeing.

Just in case you missed MGS V: Ground Zeroes, here’s a quick recap of what has happened so far.

The Soviet invasion of Afghanistan has brought a new edge to the Cold War, and in 1984, a one-eyed man with a prosthetic arm appears in the country. Those who know him call him Snake, the legendary mercenary who was once swept from the stage of history and left in a coma by American private intelligence network Cipher. Snake is accompanied by Ocelot, an old friend who saved him from attack when he finally awoke.

Now Snake’s former partner Kazuhira Miller is being held by the Soviet forces in Afghanistan. Snake must undertake a solo mission to rescue Miller and prove to the world that the legendary mercenary is not dead and gone. That first step will lead to a path of vengeance against the very Cipher that slaughtered so many of Snake’s men, and to a battle that will embroil the whole world.