Some early adopters of AMD’s Radeon RX 480 graphics card have reported that their 4GB model actually comes with 8GB of physical memory installed. This raised the question of whether the additional memory can be accessed via a software hack. AMD addressed this in an AMA on Reddit, stating that some press samples can be unlocked by flashing the card’s BIOS. 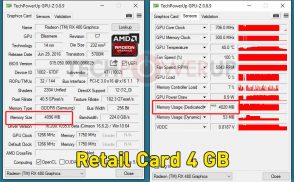 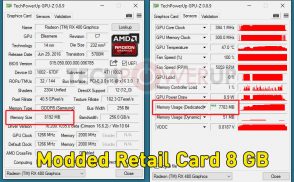 Turns out that wasn’t the case. The gurus at TechPowerUp managed to unlock a retail card using the BIOS. They first extracted the BIOS of the 8GB model using the ATIFlash, then flashed it onto the 4GB model. The BIOS image can be found here.

If you purchased an AMD Radeon RX 480 4GB, you can check the number of RAM chips installed on your card by removing heatsink. If you lucked out with one that has 8GB worth of memory onboard, it may be worth a shot to try to put them to good use. Of course, this will be at your own expense since removing the heatsink would likely mean voiding the warranty. There’s also the chance of bricking your card when flashing it with the BIOS, so do at your own risk.