Last week, Intel held their annual investor meeting and Intel VP Rob Crooke took the stage for a few minutes to give investors some insight into Intel’s memory business. During his presentation, Crooke revealed some specifics on Intel’s upcoming 3D NAND product, which up to this point has been kept a secret. 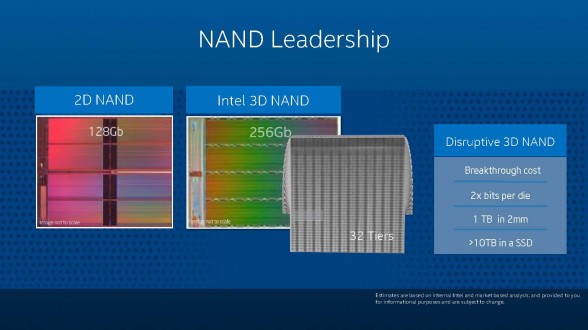 Currently the only NAND vendor on the market known to be mass producing 3D NAND is Samsung. Samsung is shipping their 24-layer MLC 3D V-NAND, 32-layer MLC 3D V-NAND, and, most recently, 32-layer TLC 3D V-NAND as well. What’ll be interesting is to see how Intel’s 3D NAND product actually compares to Samsung’s 3D V-NAND in terms of cost, performance, and endurance. While capacity per die is an important metric of cost, the size of the die and process node is also important as well. It’s fantastic that a given die is twice the capacity, but if it’s double the size of a competitor’s product as well, then it’s not going to be much of a breakthrough in cost not to mention the loss of parallelism for smaller capacity SSDs. This is the same reason why we saw Samsung move to 86Gbit dies with their 32-layer 3D V-NAND rather than increase die capacity to say 256Gb, which I’m sure is likely well within Samsung’s technological capabilities.

Intel expects to ship their first 3D NAND products sometime in mid-2015 and is very confident that they will meet the deadline. More information about Intel’s 3D NAND should trickle out during CES, so be sure to check back soon!