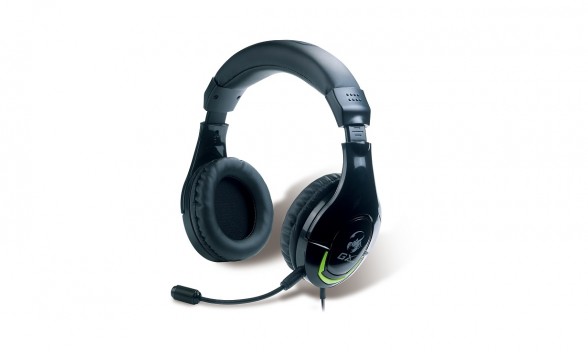 One Headset for All Your Gaming Systems

Genius is pleased to announce its newest addition to its GX Gaming Series, an universal gaming headset that is compatible with Xbox 360, PS3, PC and Mac – Mordax. With the Mordax, gamers do not need to have several headsets for each gaming platform. The GX Gaming Series Mordax is the headset for all your gaming systems.

Whether hunting down your enemies in a FPS or going on a raid, the GX Series Mordax plugs into your PC or Mac via USB letting you listen to explosions and chat to your teammates without disturbing the roommates or neighbors.

For Xbox 360 and PS3, once the Mordax is plugged into the TV via the RCA splitter extension, gamers only have to switch to “Game Mode” on the in-line control to experience high quality audio. Other devices can be plugged into your TV through the same RCA ports when this Genius universal headset is plugged in thanks to female ends on the back of the RCA jacks. When playing games on a Xbox 360, the included 3.3 foot 2.5mm stereo cable allows for Xbox 360 chat.

The large 40mm drivers and built-in headphone amplifier ensure loud high-quality sound no matter the system. The cushioning on the drivers and adjustable headband give gamers a comfortable, universal fit.

Volume controls are easy on the Genius Mordax. Users can adjust master volume and mute the microphone on the in-line control. To make sure teammates aren’t listening to you when you don’t want them to, a LED indicator light is green when the microphone is on and red when switched off. Additionally, the omni-directional microphone is fully adjustable and can be detached from the headset, making the Mordax easy to store and transport.

The GX Gaming Series Mordax universal gaming headset is now available in the US and Canada for the suggested retail price of US$69.99.

More information about the Genius Mordax can be found at the product page here.