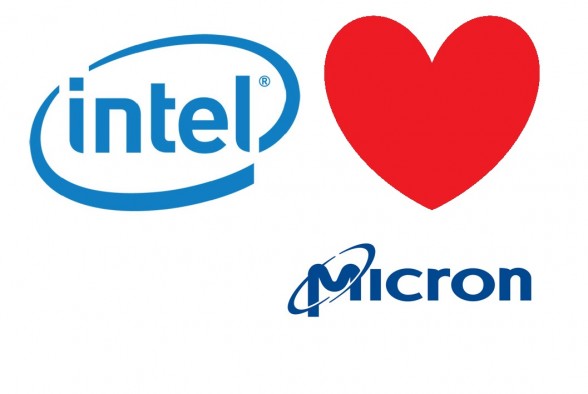 Well, it looks like both Intel and Micron are firm believers in SSD technology’s future. According to a recent press release, Intel and Micron have announced new agreements to expand their joint venture. In this new agreement, Intel is planning to sell off a couple of its wafer manufacturing facilities to Micron and Micron is agreeing to supply Intel with NAND flash memory from their facilities. For more details scroll down for the full press release below.

Anybody else looking forward to picking up some INTC and MU?

The agreements, which are designed to improve the flexibility and efficiency of the joint venture, include a NAND Flash supply agreement for Micron to supply NAND products to Intel and agreements for certain joint venture assets to be sold to Micron. Under terms of the agreement, Intel is selling its stake in two wafer factories in exchange for approximately $600 million—the approximate book value of Intel’s share. Additionally, Intel will be receiving approximately half of the consideration in cash and the remaining amount will be deposited with Micron, which may be refunded or applied to Intel’s future purchases under the NAND Flash supply agreement. The agreements also extend the companies’ successful NAND Flash joint development program and expand it to include emerging memory technologies.

“Micron’s joint venture NAND development efforts with Intel are a model of innovation, productivity and effectiveness,” said Micron Chief Executive Officer Mark Durcan. “With IM Flash and its associated programs, our companies have become leaders in the NAND Flash arena. These new agreements build on that success.”

As part of these agreements, Micron will increase its share of the overall NAND Flash output and optimize its global manufacturing network by purchasing the assets of IM Flash Singapore (IMFS) and the IM Flash Technologies (IMFT) assets in Manassas, Va.

Micron has also agreed to supply Intel with NAND Flash memory from its facilities. The IMFT joint venture NAND manufacturing facility in Lehi, Utah, will continue to operate with minimal changes to its existing operations. The facility is currently in production on the companies’ industry-leading 20nm NAND Flash memory technology. The transaction is expected to close during the first half of this year, subject to certain conditions.