It seems like there’s a new cooler on the market every time I turn my head. I mean, even the CPU giants like Intel and AMD have their own all in one liquid cooling solutions nowdays. With all these coolers floating around, it can be dizzying trying to choose the right one. However,  anyone who’s familiar with CPU coolers will know that each cooler has differences. There’s are always companies out there that release the most forward thinking, most innovative designs and those who make coolers that seem like they’re based off a reference design somewhere. 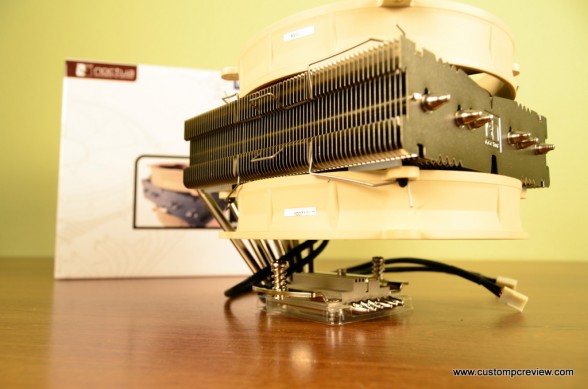 Luckily for us, we’re going to be taking a look at a product from one of the innovative companies today. As a master of cooling technology, Noctua has a long list of accomplishments and awards trailing many of their products. Today we’ll be looking at the Noctua NH-C14. Following their usual creative trend, Noctua developed the NH-C14 primarily for quiet computing enthusiasts who want maximum performance. Aside from the unorthodox design, the CPU cooler packs six nickel plated heatpipes, dual 140mm fans, the SecrureFirm2 mounting system as well as an industry leading 6 year warranty. Excited? Yeah, me too. Let’s get started!

Looking at the specifications, we can see that the noise level is rated at only 19.6 decibels. This means that even at full power, the fans will be near silent. With the low noise adapter attached, the noise level drops down to 13.2 decibels, which is near inaudible especially if the computer is a couple feet away. 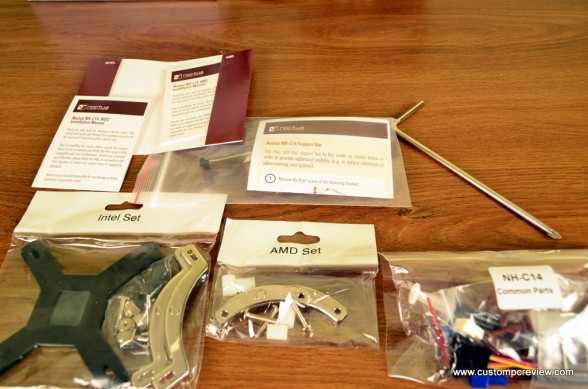 The accessories include separate mounting brackets for AMD and Intel sockets, MOLEX fan wire adapters, a user manual, a high quality screw driver, a tube of cooling paste, and other miscellaneous items. All bags are labeled and individually packed too. Wish more companies would do this… on everything! 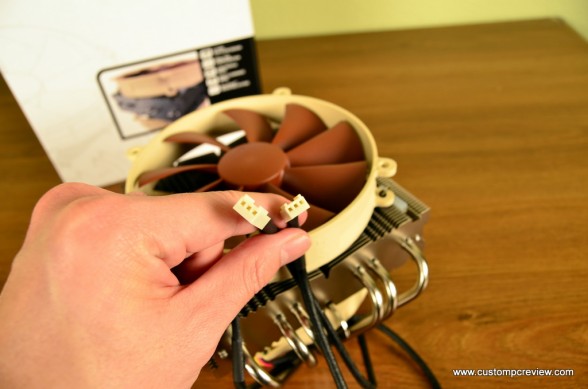 The heatsink includes two 140mm fans, which are non-pwm, so they use 3 pin headers. Noctua has also included a 3 pin splitter (one 3-pin to two 3-pin) so both fans can be connected to one 3 pin header on the motherboard. Additionally, the wires on the fans are sleeved, which look very nice. 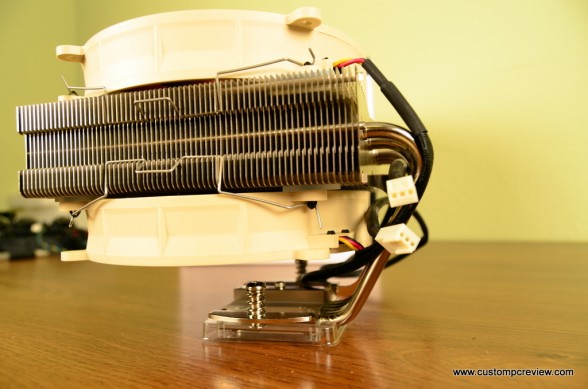 The fans are mounted to the heatsink using metal clips. This has pretty much become the standard lately for higher end CPU coolers. They are easily removable and are very secure. 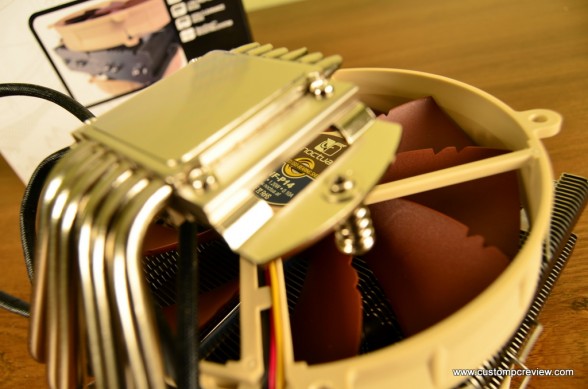 The two NF-P14 140mm fans spins at a rate of 1200 rpms and at 900 rpms /750 rpms with LNA and ULNA respectively. The fans use SSO bearings as well as a couple other features in order to minimize operational noise and increase lifespan. 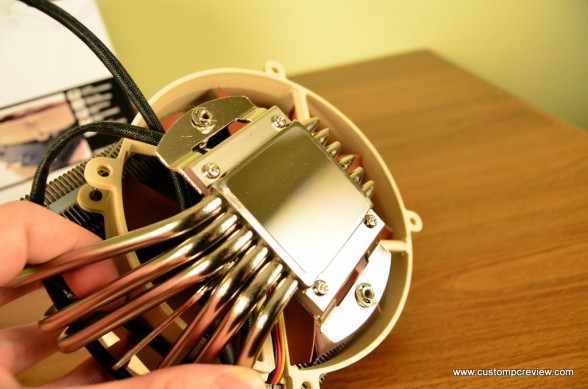 The base-plate has a very smooth finish and is free from all scratches and other imperfections. In addition to a thin layer of thermal paste, this should make excellent contact with the CPU. 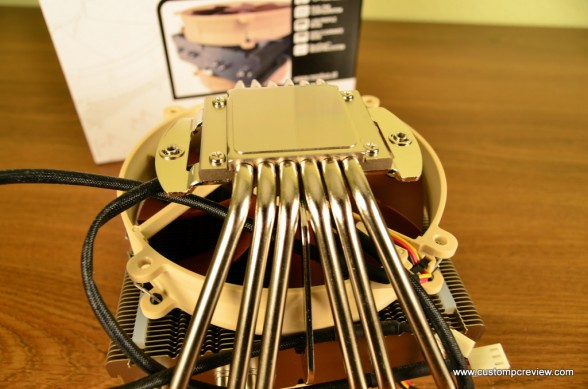 The six heat-pipes all extend from one side of the base-plate to the horizontally oriented heatsink, which help to create the distinct “C” shape.

Installation was a breeze. The SecureFirm2 mounting mechanism was and is probably the easiest system to work with. You’ll most likely need the included screwdriver as you’ll need it to screw in the baseplate to the mounting mechanism through pre-cut holes in the heatsink. (These are only about big enough for the included screwdriver to fit) Otherwise, there’s only about 6 screws to worry about and the mounting system can be installed within minutes. 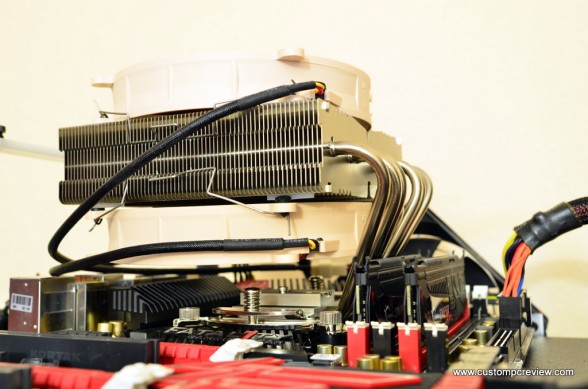 Here’s a look at the NH-C14 installed. The cooler may be oriented in any direction, which makes it quite versatile as well. Additionally, the Noctua NH-C14 pulls air from the top and blows it onto the motherboard. This is especially nice because it creates a lot of incidental airflow to help keep the memory and the vrm area cool.  With both fans attached, this cooler is almost as big as some of the traditional tower coolers out there. 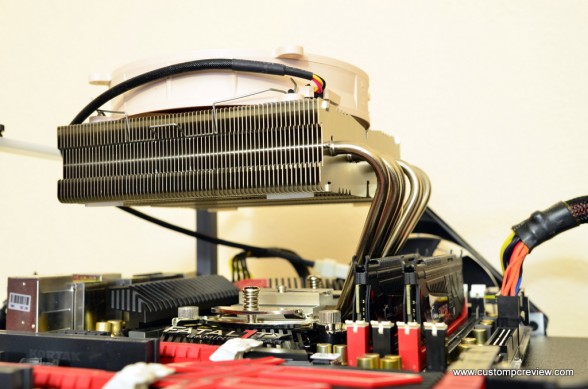 With the bottom fan removed, there’s a lot more clearance on the underside. This could be a life saver if the second fan collides with the RAM. As you can see here, we didn’t have that issue since our G.Skill Sniper memory is quite low profile. 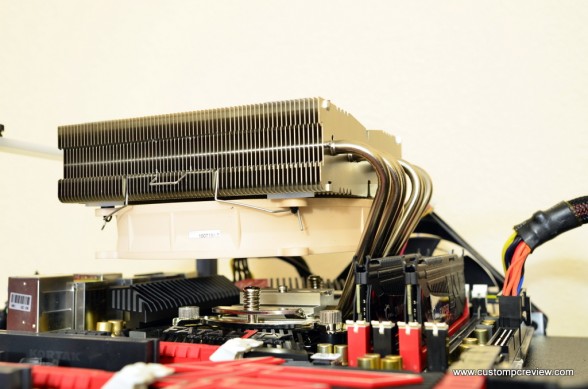 Similar to the previous scenario, there’s now a lot more room at the top with the top fan removed. This is great for a build in a narrower case, or a shorter case if you’re looking to put this into a media center PC. 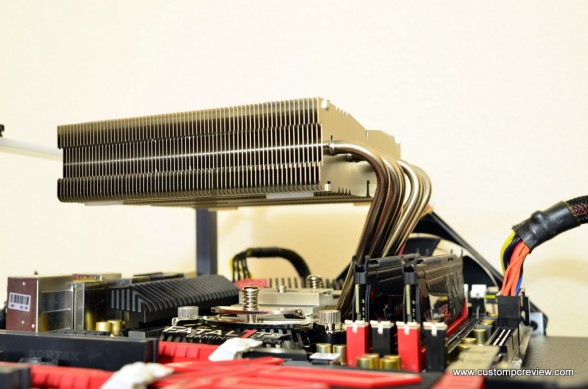 Finally, with no fans the heat-sink is, well, a heat-sink. Running this cooler with no fans may be a viable option if you have a system with a really low powered CPU and a lot of airflow in your case. Otherwise, this is not recommended. 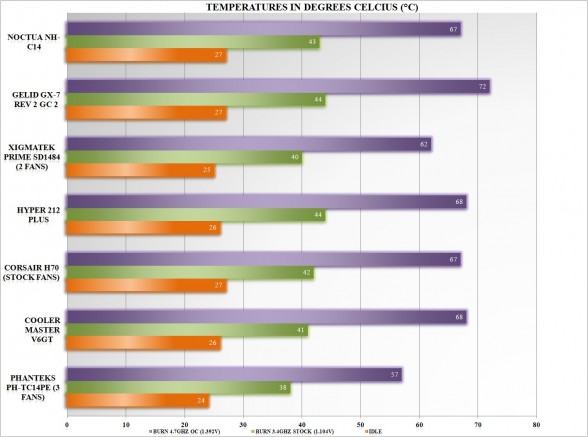 One thing we noticed during testing is that this cooler is very quiet during operation. Even with the fans spinning at the maximum (1,200 rpms) the fans were quite silent. Additionally, the acoustic profile of the fan was very pleasing to the ear, giving off a nice smooth wooshing sound as air passes through the fans.

As far as cooling performance is concerned, we found that cooling performance is on par with the Corsiar H70 water cooler, and is only out matched when the clock speed is cranked up beyond 4.7GHz. However, in order to achieve that level of performance, the stock Corsair fans need to spin at a deafening 2,000 rpms while the NH-C14 spins at a quiet 1,200 rpms. Otherwise, the Xigmatek Prime SD1484 (large tower cooler) was able to beat out the NH-C14; however, it does sport dual 140mm fans similar to the NH-C14 and is comparable in price as well.

Finally, just for your consideration, it may be worth nothing that this cooler does push air downwards onto the motherboard instead of out the back or top, which means case temperatures may be a bit higher when compared to other coolers on the market. 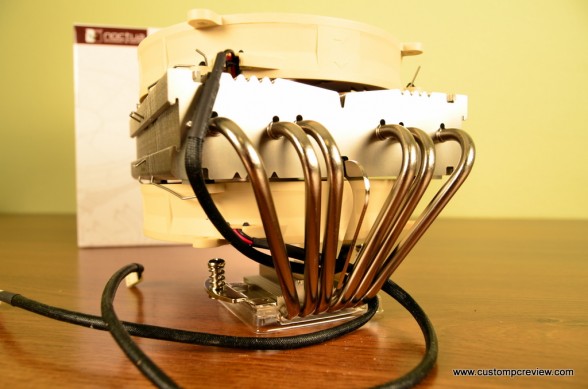 Overall, the Noctua NH-C14 boasted an excellent level performance while being very quiet. It’s highly recommended for those interested in putting together a smaller form factor PC or an HTPC, and want cooling performance simply unavailable to smaller tower coolers.

Special thanks to Noctua for making this review possible.

The Noctua NH-C14 is currently available on Amazon.