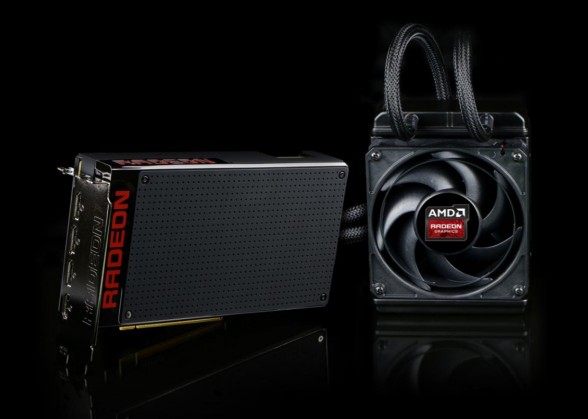 Starting from the top, AMD has exclusively reserved its new Fiji GPUs for the Radeon R9 Fury line of graphics cards.

The flagship Fiji GPU is the Fiji XT, which is used to power AMD’s new Radeon R9 Fury X. Still based on the 28nm process, the new Fiji XT GPU carries a staggering 64 Compute Units for a total of 4096 stream processors. AMD claims that this is capable of up to an impressive 8.6 TFLOPS of compute performance.

Along with the new GPU, AMD has also drastically overhauled the way VRAM is implemented on its Fiji based graphics cards. Using a new technology called High-Bandwidth Memory, VRAM is now stacked vertically on an interposer which also houses the GPU. This not only brings the VRAM closer to the GPU, the interposer also drastically improves the width of the memory interface, pushing it from previous 512-bit, 256-bit, etc. design to a massive 4096-bit design. This allows AMD to reduce clock speeds on the memory for massive power savings yet still retain huge amounts of memory bandwidth. You can learn more about HBM in our article here.

Despite the impressive 8.6 TFLOPS of performance being pushed out of GCN architecture, the Radeon R9 Fury X carries a TDP of just 275W, which isn’t too bad at all. AMD has included dual 8-pin connectors on the Radeon R9 Fury X which will deliver a theoretical maximum of 375W. There seems to be huge overclocking headroom here, so we’re very much looking forward to getting our hands on one of the new cards.

To cool the beast, AMD has a custom designed closed-loop water cooling solution for the Radeon R9 Fury X. The cooler is pretty overbuilt, utilizing a thick 120mm radiator and is capable of up to 500W TDP cooling. That said, at 275W TDP, I’m sure AMD’s AIB partners will find a way to put an air cooler on there someday.

As expected, the Radeon R9 Fury X will be top dog in AMD’s graphics card line-up when it launches on June 24. Pricetag on the new beast is $649, which positions it to directly compete with Nvidia’s GeForce GTX 980 Ti.

It’s expected to be released a little later than the Radeon R9 Fury X on July 14. 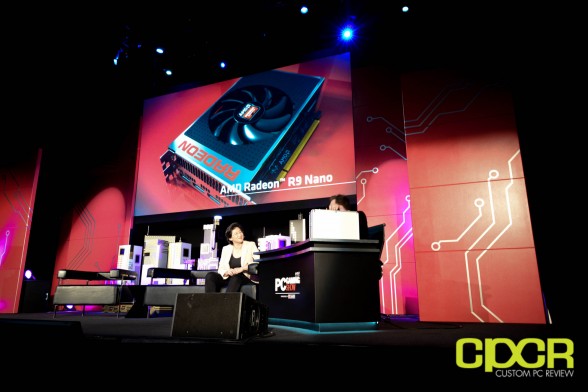 There’s a third card in the Fiji GPU based graphics card stack that AMD didn’t spend very much time talking about. Called the Radeon R9 NANO, it’s going to be based on a Fiji GPU, but it’ll have quite a bit fewer compute cores and stream processors than the flagship model. That being said, the Radeon R9 NANO will only be 6″ in length and will have a TDP of just 175W.

AMD hasn’t given us any additional specs nor its price, but it’s expected to launch sometime this summer.