The MSI X99A Godlike Carbon Edition features a makover compared to the original X99A Godlike edition. MSI has strayed away from its Gaming Series signature red and black color scheme and instead applied a more suave carbon texture. To make up for the lack of a flash color scheme, MSI added customizable RGB lighting so you can fill your case with a rainbow if you’re into that…

As its name implies, the X99A Godlike aims to make sure that it’s the last X99 motherboard you’ll ever need. It comes with an external DAC with Audio Boost 3 Pro, Killer DoubleShot-X3 Pro, Turbo M.2, and USB 3.1 standard in both type-A and and Type-C connectors. Also present is a slew of overclocking features such as extra pins on the CPU socket to overclock the memory and covering all the power components of the board with MSI’s Dragon Cover heatsink. 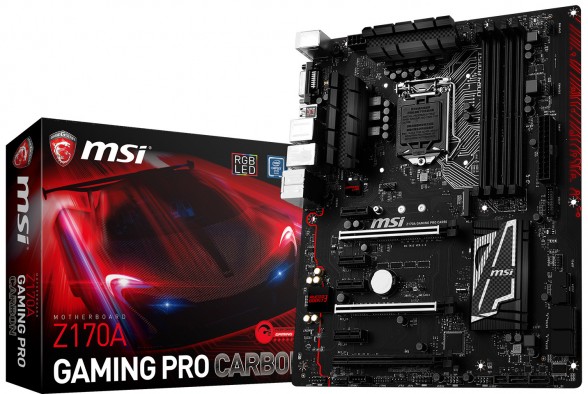 MSI’s got a offering for those who don’t want or need an extreme end X99 platform. The MSI Z170A Gaming Pro Carbon edition motherboard features much of the carbon aesthetics as the X99A Godlike Carbon and the RGB LED.

Pricing and availability have not been announced yet although we expect them to be priced similar to the current products with a little extra for the pretty lighting.