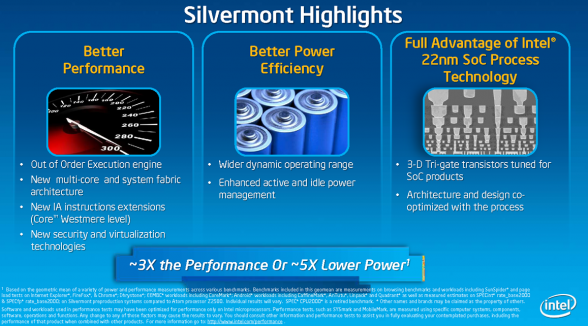 Mobile platforms such as smartphones and tablets have been growing exponentially over the past couple years, quickly overtaking PC shipments and surging to record high adoption rates. However, despite Intel’s success in the PC industry, they haven’t put much effort into the mobile market. Until now.

According to a recent press release, CPU giant Intel announced a new Atom platform codenamed Silvermont. The once low performing series of chips you generally find on netbooks, HTPCs and NAS units are now breaking away from their rather lackluster history and into the future of mobile technology. Current high end mobile (smartphone/tablet) platforms generally rely on SoCs equipped withARM processors from Qualcomm, Nvidia, and Samsung leaving Intel nowhere in sight; however, with the Silvermont platform, Intel is finally bringing a 64 bit, high performance, low energy consumption, x86 based processor to the mobile arena.

No information on pricing or availability just yet, but we’ll keep an eye on this one. If Silvermont is able to perform anything like what Intel claims, we might just be seeing a lot more x86 in our next smartphone or tablet.