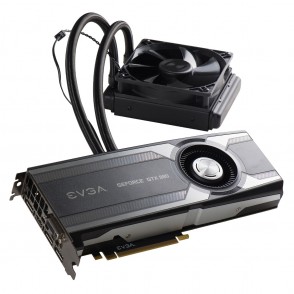 have been on the market for quite some time, and even AMD jumped into the mix using a similar solution for their flagship Radeon R9 295×2. 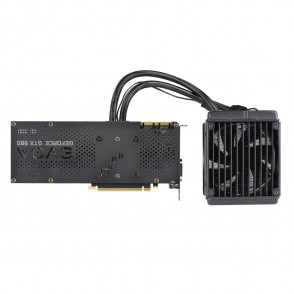 With the HYBRID GPU cooler, EVGA claims ~25°C performance improvement compared to the reference cooler. In order to take advantage of the superior thermal performance, the EVGA GeForce GTX 980 HYBRID is factory overclocked to 1291 MHz base clock and 1393 MHz boost clocks. Coupled with variable speed fans that can be adjusted to ramp up when under load, the GTX 980 HYBRID promises high cooling performance and low noise.

The EVGA GeForce GTX 980 HYBRID will be available both as a bundle option (graphics card plus HYBRID cooler) or as a standalone aftermarket heatsink that users can purchase to upgrade their existing GTX 980. The card is expected to retail for $649.99 and the standalone cooler is expected to retail for $99.99. Both products should be available shortly.