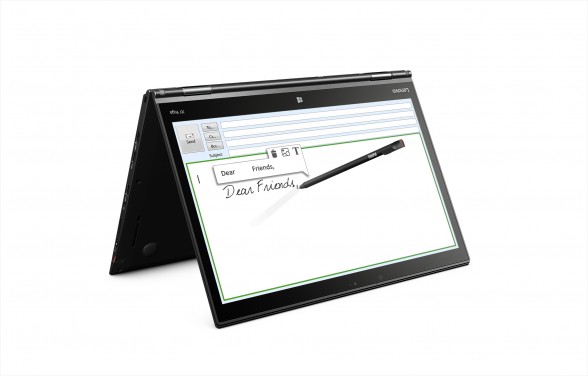 Lenovo made an interesting move at CES 2016 by splitting its ThinkPad X1 series into three sub-product segments. Among them is the Lenovo ThinkPad X1 Yoga, which from the spec sheet looks like it borrowed features from many other products in the ThinkPad lineup.

The biggest selling point of the Lenovo ThinkPad X1 Yoga is that it features a 14″, Samsung-made Organic LED display (OLED) on its higher end models. OLED has many advantages over traditional LEDs. Because OLED’s LEDs are self emissive and are exactly the size of a pixel, there’s no blooming effect when it’s displaying dark scenes. Contrast ratio of OLED display is vastly superior to traditional LED LCD because its backlight is completely turned off when displaying black. The particular OLED display on the Lenovo ThinkPad X1 Yoga features a resolution of 2560×1440 (16:9 aspect ratio) and is touch enabled. The base model will use a 1920×1080 IPS LCD display.

Many other aspects were upgraded as well. The Lenovo ThinkPad X1 Yoga leverages Intel’s latest Skylake U processor with vPro. Users can configure their device with up to 16GB of RAM and up to 1TB of NVMe SSD. Expandability options are now more abundant – the ThinkPad X1 Yoga features 3 USB 3.0 ports, a mini-Display port, HDMI, and a micro SD card slot. Another neat feature we appreciate with some of Lenovo’s other convertibles is that the keyboard retracts into the base when the screen is flipped, and we’re happy to see it on the ThinkPad X1 Carbon Yoga. Wireless connectivity is managed using Intel’s Intel Wireless 8260 AC wireless card. Lenovo also offers the option of slapping on a Qualcomm Snapdragon X7 LTE card for data on the go. Last but not least is the addition of a stylus; it can be stored into the base and charged when it’s stored.

The Lenovo ThinkPad X1 Yoga will be available for pre-ordering through the Lenovo Store. Users interested in the OLED model will have to wait until April. Starting price will be $1499.