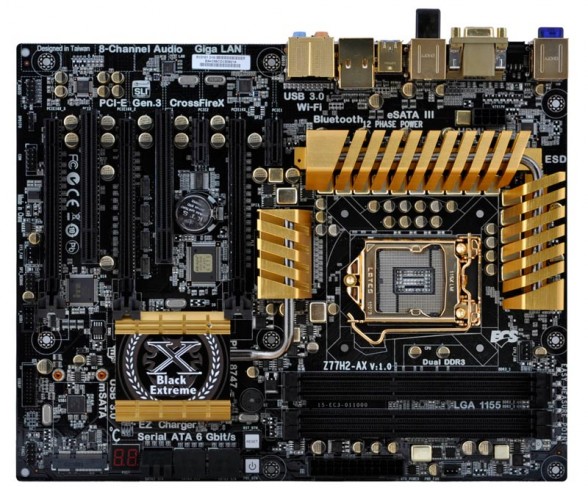 Think your PC got bling because your motherboard has a couple gold capacitors? Better think again!

ECS recently announced that they will be producing the new Z77 Black Extreme Series – Golden Limited Edtiton motherboard that will include tons of bling for you to really up your PC’s gansta cred.

According to their recent press release, ECS is including triple thickness gold plated connectors for all the motherboard’s connections, so even if you swap components frequently, rest assured the connectors won’t wear out. Additionally, it looks like a whole ton of components are gold plated as well from the entire I/O panel, the heatsinks, the CPU socket, as well as the capacitors.

The Z77 Black Extreme Series – Golden Limited Edtiton motherboards are expected to come in 2 SKUs – Z77H2-AX and Z77H2-A2x. Both motherboards will support PCIee 3.0, SATA 3 6Gb/s, Crossfire/SLI support, USB 3.0, Bluetooth, Wireless LAN and much more. For the full details flip over to the full press release.

Pricing is unknown at this time, but I wouldn’t expect this thing to come cheap seeing how ECS is only producing 200 of these and each one will include a certificate of authenticity personally autographed by the GM of ECS.

The ECS Z77 Black Extreme Series – Golden Limited Edition features triple-thickness gold plated connectors and has passed the strictest quality tests, giving power users the security that the gold plating won’t wear out after extensive component upgrades, safe guarding the board from the threat of corrosion.
The individually-numbered, handcrafted motherboards are stunningly outfitted in cool black with dazzling gold plated key components, giving both the Z77H2-AX and Z77H2-A2X a sophisticated and classy appearance that is unprecedented in the PC motherboard industry. Key features include: ATI CrossFireX and NVIDIA SLI graphics support with next generation PCI Express 3.0 to achieve the ultimate in 3D gaming performance and visual quality, QoolTech IV visible temperature technology to protect your valuable PC components, and support for the fastest 3rd generation Intel Core processors.

Unprecedented reliability
To ensure maximum reliability and customer satisfaction ECS has enhanced its already stringent quality control procedures by increasing the testing cycle for each of these very special boards to three times longer than the industry standard and by raising the burn in testing temperature to 125% of the industry standard.

The Z77 Black Extreme Series boards are the first to provide full support for Intel’s next-generation Ivy Bridge CPUs for cutting edge performance, but they still maintain compatibility with older socket 1155 CPUs to provide an easy upgrade path. The new Intel Z77 chipset at the heart of these motherboards is the first to include USB 3.0 support without external chips, bringing greater performance, expandability and reliability. Moreover, the Z77H2-AX and Z77H2-A2X are the first generation with official support for PCI Express 3.0 add-on card technology, to get the most out of future generations of graphics cards as well as today’s most powerful models. The new Lucid Virtu MVP chip gives consumers both the high performance of add-on graphics cards and the economical power saving of integrated graphics – by switching between them seamlessly and automatically.

Power user features
For overclockers and modders, ECS’ Black Extreme Series – Golden Limited Edition provides a wealth of tweaking, control and adjustment features. Solid long-life capacitors in all critical areas guard against failure even in the most challenging conditions. Triple thickness gold plating on CPU, memory and add-on card sockets ensures these two models always provide a reliable connection, even with heavy use and in hostile environments. Thor Ultra Protection guards against component damage from static electricity in dry climates. And in a sea of lookalike products, the distinctive gold and black Z77H2-AX and Z77H2-A2X boards are undoubtedly the best-looking motherboards around.

Exclusive limited edition
The Z77H2-AX and Z77H2-A2X models are initially available in the US market in a very limited quantity: 200 pcs. Each of these high-end Z77 Black Extreme Series – Golden Limited Edition motherboards is accompanied by a certificate of authenticity personally signed by the General Manager of ECS, emphasizing the company’s determination to guarantee quality, performance and ultimate reliability to its customers.