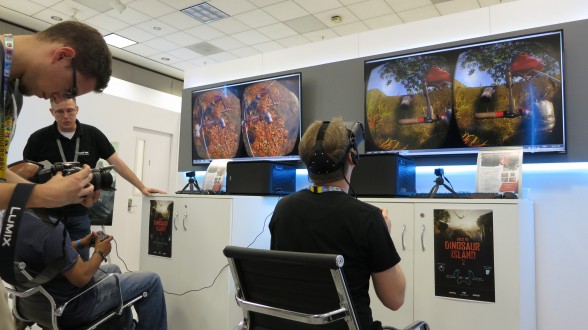 The biggest thing at E3 2015 was easily VR (Virtual Reality), where seemingly almost everyone on the show floor demo’ed some sort of new hardware or new software. VR hardware manufacturers in particular have shown some very interesting designs in hopes of dethroning Oculus Rift as the industry standard however, among the barrage of options being presented, nothing was quite as impressive as the latest Oculus Rift headset paired with Crytek’s Back to Dinosaur Island 2 demo.

Starting right off the bat I had doubts about the VR experience Crytek and Oculus was promoting at their booth. In my past encounters with VR, especially those with the first few Oculus developer kits, I had severe bouts of motion sickness. Nevertheless, they reassured me that the updated Oculus Rift is a totally new headset technology and the experience would far exceed any expectations. After some deep breaths, some finicking with my glasses which somehow would not cooperate fully with the shape of the headset, I eventually dove into Dinosaur Island.

Long story short, I was blown away.

While it’s really something that needs to be experienced first hand, just imagine being immersed in a Jurassic Park like world with prehistoric behemoths actively carrying out their daily routine as you slowly scale a mountain along motorized zip lines. The rock face of the mountain was beautifully designed with land features showcasing the shaders and lighting dynamics Crytek has perfected over the years with their Crysis franchise. The stellar sub-surface scattering combined with smooth anti-aliasing made the latest Oculus Rift headset truly shine.

Head tracking was very accurate as moving my head to look behind me abruptly only showed very minor graphical hiccups, just some distortion and lag but nothing to ruin the demo. Tilting my head to control my virtual hands on the zipline grips was a little different at first but I got the hang of it after a couple tries. Eye movement tracking was responsive as I climbed to the peak of the mountain side, discovered a vast plateau abundant with wildlife and inspected several objects of interest in the distance for the demo’s mission. Standing on top of the vantage point, it was quite breathtaking just taking in the panoramic view. Now the only thing missing is finding a way to simulate the other senses (maybe having a fan with pine scented car freshner would do for a diy rig but I am sure developers are capable of much more elegant solutions). 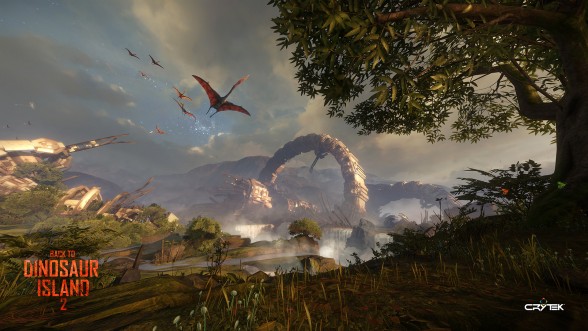 Powering the graphically intensive demo were the newly announced AMD Fury X graphic cards which were able to maintain 90 FPS frame rates which combined with positional tracking and low persistence technology with the new Oculus Rift headset, did quite a bit to help eliminate the dreadful motion sickness that I experienced with the older Oculus Rift developer prototypes. This I strongly believe was the secret to success as the demo was so well optimized that flickering and other visual bugs that has plagued VR in the past were kept at a minimum.

Overall, Crytek and Oculus really had a fantastic showing this year at E3 and I can’t wait to see more. While I’ve never been much of a believer in VR technology, I can say that it’s finally looking polished enough to be something I’d be interested in buying when it gets released (hopefully) in Q1 2016.